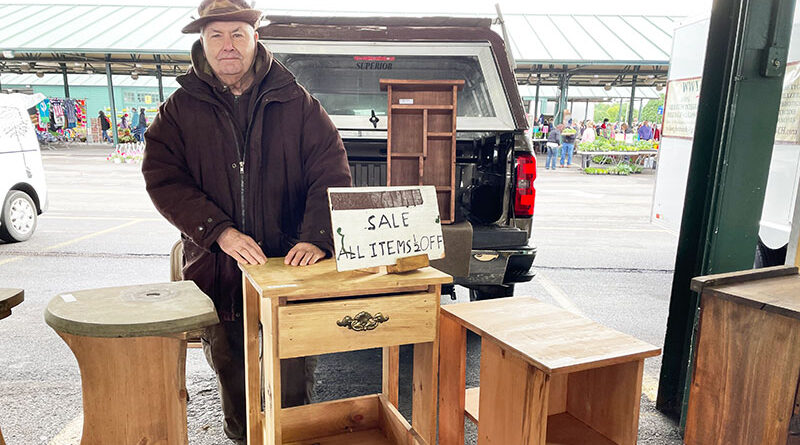 He retired once, in 1994, as music teacher from Liverpool school district; this October, at 86, B. Bradley Bowers is retiring from his second career of nearly 50 years: custom furniture making and vending at the Syracuse Regional Market

Bradley Bowers prefers not to blow his own horn — unless it’s a tuba.

The retired music teacher who played a key role in Syracuse’s Habitat for Humanity, an organization that he became involved with by happenstance, will quietly retire in October from his second career of nearly 50 years as a custom furniture maker and vendor at the Syracuse Regional Market.

The brass player came to Syracuse on a scholarship and realized his dream of conducting live performances, never imaging he’d embark upon so many experiences outside the performance halls along the way.

“My father never said the same thing that all parents said to their kids — ‘I just want you to be happy,’” Bowers said during a recent interview on the day after his 86th birthday. “Instead, he said: ‘Be of service to others.’ He was not a big talker, just a doer. I’ve tried to follow that.”

Bowers, the son of Benjamin and Janice Bowers, grew up in Pittsfield, Massachusetts.

Benjamin was an electrical engineer at General Electric. Janice was a professional vocalist [alto] who sang in a Christian church and a Jewish temple. During the summer months, after Bowers started high school, he took after his father and volunteered as an usher for the Boston Symphony performances at the Tanglewood, venue in Lenox, Massachusetts.

Bowers took piano lessons from age 5 until he was in seventh grade. He enjoyed it as a youngster, but as an adolescent, he got tired of practicing the instrument so often. In ninth grade, on the dare of a classmate, Bowers showed up for a sousaphone lesson to give that instrument a try.

“I picked it up quickly because I loved it,” he recalled. “Then I started dreaming of being a band director.”

Three years later, while watching Syracuse University lose to Alabama in the Orange Bowl, Bowers set his sights on getting a spot in SU marching band, which he says stole the show in an otherwise boring football game. He did well enough at his 1953 audition to receive a scholarship, which he combined with the ROTC program. That also meant that Bowers got to play in two campus bands.

“Back then we played at the [Syracuse] War Memorial,” Bowers said. “Maybe 500 people would show up to the basketball games because they weren’t very good. You can’t say that anymore.”

“We went from a $75 per month apartment in Pittsfield [Massachusetts] that was fully furnished to a three-room apartment in Queens that was $200 plus utilities, with nothing in it. We could either afford rent, or buy furniture.”

Out of necessity, Bowers decided to make his own. The wood shop at Fort Totten had the tools and materials that he needed. But there were no instructors, manuals or books — Bowers was completely self- taught.

The furniture making was put on hold for a while when Bowers and his wife, Judith, moved back to Central New York, where Bowers accepted a position with the Liverpool school district. As their family grew — their four children are now grown — more money was needed. During the summer breaks between school years, Bowers gave private music lessons, worked at an oil foundry, and took on jobs as a summer camp supervisor.

In 1972, Judith suggested giving up those seasonal jobs and try selling hand-crafted furniture at the Syracuse Regional Market instead.

Just as quickly as Bowers learned to read music, he figured out how to craft custom book cases, hutches, tables and benches from the drawings that customers provided him.

In his five decades working from May through December at the Regional Market, Bowers, calling himself “the world’s worst salesman,” never advertised, and completely relied on word of mouth. He always preferred pine because it’s affordable yet durable.

“When I was growing up, I made one end table to pass the Boy Scouts woodworking badge, and that was under my father’s supervision,” he said. “When I was raising four kids, I had to learn quickly by trial and error because the money was very important. But now, I really enjoy being myself and working in the shop.”

The vast majority of Bowers’ work has been custom orders, but he always brought five or six simple pieces with him to his booth so potential customers could get a sense of his style. Most Saturdays, Bowers sold those pieces for half price. His most unusual creation: A cat house.

“The customer wanted it to be big enough for the cats to mate,” he recalled. “They had kittens, so I guess she was happy with my work.”

“I knew I wanted to spend the rest of my teaching career there,” said Bowers, who retired in 1994. “I got more respect probably than I deserved from my students. We had some good times together and made some good music together.”

Between teaching and the weekend furniture gig, Bowers had little time to practice his own instruments or perform music. He picked that back up after his retirement, joining the Onondaga Civic Symphony and the LaFayette Community band, playing with those groups regularly until COVID-19 sidelined them in 2020. He also belted out tuba solos at the Regional Market to raise money for Habitat for Humanity.

As for building houses, that was another unusual opportunity that came Bowers’ way. In the early 1980s, John Knight of the Onondaga County Presbyterian Church talked him into joining the Habitat for Humanity chapter he was starting, presuming that if Bowers could build furniture, he could build houses. This time, Bowers was not completely self-taught. He read up on residential construction and consulted with as many builders as possible. Bowers, Knight and the rest of the volunteers built the chapter’s first house, on Midland Avenue, in 1988. The first family they helped was Cambodian immigrants. Dozens of houses would follow.

Bowers gradually scaled back his volunteer hours with the organization as he got older. He no longer gets up on the ladders or manages matters at the board meetings, but he still donates to the cause.

He loves classical music and the color brown. His favorite pop song of all time is Billy Joel’s “Piano Man.” He despises computers, tablets and cell phones. He’s hiked in some interesting places — New Zealand, Grand Canyon and Letchworth State Park. During the winter months, he prefers to stay local and cross-country ski in various locations in Central New York or the Tug Hill.

“I was on some skis every chance I got, but never in any hurry,” he said. “I’m a stop and smell the roses type of skier.”

Bowers will have even more time to ski this coming winter after he exits the Regional Market for good. But he’s not ready to put his tools away just yet: There are plenty of home improvement projects waiting for him. Come spring and summer, he and Judith will dust off their hiking boots and take down their canoe. Boredom is not on the horizon for Bowers.