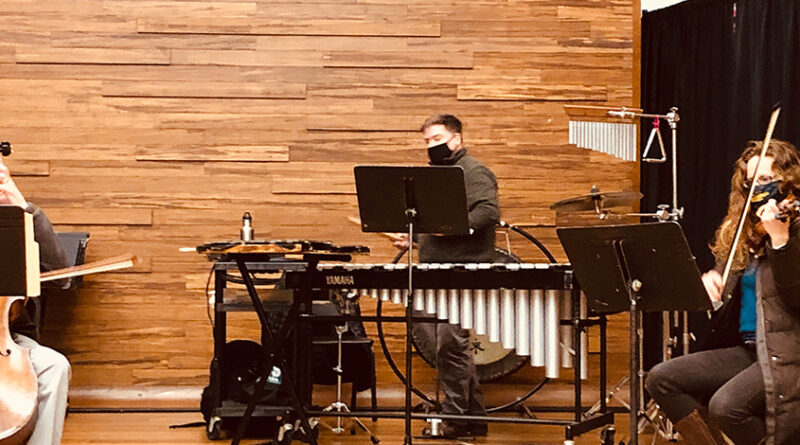 Music and motion was everywhere.

And topping it all off — literally — a blare of trumpets on the roof of SU’s School of Engineering. 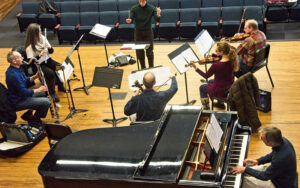 This was composer Robert Morris’s “Sound/Path/Field,” brought to us by Syracuse’s Society for New Music in 2006. Fast forward to 2021, Onondaga Park, Syracuse, for “Wilderness Sounds” when 12 trombonists roamed along Hiawatha Lake. And 2022, for “Vision of Sound” programs which showcased as many as six regional composers and six regional dancers.

The Society of New Music has been offering these exuberant performances for all musical tastes since 1971. Neva Pilgrim, the society’s program adviser and one of the co-founders, has seen SNM’s concerts and community involvement take on remarkable dimensions in multimedia performances, education and collaboration among musicians, artists, and dancers from across New York’s diverse cultures.

Pilgrim describes new music as music composed during our lifetime. “That doesn’t mean it doesn’t build on musical works from the past; just puts things together differently,” she added.

While the traditional orchestral instruments familiar to concert-goers make up many of the compositions, other works incorporate modern devices like computers and synthesizers, or the folk instruments that reach back to the roots of native and nonwestern cultures.

For instance, SNM commissioned a work by Mohican composer Brent Michael Davids to accompany the Syracuse International Film Festival’s showing of “The Last of the Mohicans.” Davids himself performed on Native American flute with a Native American ensemble as well as a chamber music ensemble. On other occasions, performances draw on traditional instruments, like the string ensembles of Spanish-American composer, Octavio Vasquez. Yet other performances offer a mix of musical periods. For a performance SNM coordinated with the Cazenovia Counterpoint Festival in July 2021, prize-winning organist Dominic Fracco from Poland, New York, played a new composition by the young Cortland/Binghamton-based composer Emmanuel Sikora and then followed it with Bach’s “Prelude and Fugue in E Minor.”

By combining the new and traditional, SNM percolates possibilities that offer new insights into history and culture. They have even updated the operatic form.  “Pushed Aside: Reclaiming Gage,” an opera about Matilda Jocelyn Gage, was commissioned by SNM and featured a libretto by Ithaca-based composer Persis Parshall Vehar. Just in time for the centennial of the women’s right to vote, the opera was presented at Syracuse’s Carrier Theater in January 2018. A larger public saw excerpts at the 2019 New York State Fair. SNM also commissioned and premiered “Libba Cotten: Here this Day,” about home-grown folk legend Libba Cotten (who will be inducted in the Rock and Roll Hall of Fame in November 2022). The opera, with libretto by Kyle Bass, Syracuse Stage’s current playwright-in-residence, and music by Hobart and William Smith professor and composer Mark Oliveri, was presented at Libba Cotten Grove in Syracuse, as well as Syracuse’s Tucker Missionary Baptist Church, the Catherine Cummings Theater in Cazenovia, and the Franklin Stage Company in Franklin.

While Pilgrim herself will be the first to tout the dynamic board members for coming up with many of SNM’s “firsts,” she does allow that she is “the glue.” As program adviser, it is she who keeps all the variables in sync, while following her own passion for music. An internationally recognized operatic singer, Pilgrim has been singing all her life in church and school music rooms in her native Minnesota. In her senior year of high school, Pilgrim had her very first command performance of Mozart’s ”Hallelujah,” for the Minnesota equivalent of the New York State School Music Association.

“My mother stayed up late into the night sewing me a new dress,” she recalled fondly. Pilgrim pursued her musical studies at Minnesota’s Hamline University, earned her master’s degree at Yale University and a fellowship at the Vienna Academy of Music. Since her mom sewed that first special dress in her senior year, Pilgrim has had plenty more dress-up occasions. She has soloed with symphony orchestras in Syracuse, Binghamton, Chicago and St. Paul, Minnesota, to name a few. A career highlight for her was her performance for the New York Philharmonic, singing a piece by the late American composer George Rochberg, conducted by the great Pierre Boulez. Pilgrim also has more than 20 recordings, some of which can be found on YouTube.

When she moved to Syracuse years ago with her husband, Richard Pilgrim, a professor of religion now retired from Syracuse University, Pilgrim found she’d landed in the same place as a respected Yale colleague, Ralph D’Mello. D’Mello, who now resides in DeWitt, said, “I always had a tendency to do modern music. And there wasn’t anything here, so I said, ‘Neva, we’ve got to do something!”

Pilgrim’s thoughts exactly! The Society for New Music was born, with Pilgrim, D’Mello, and a young Canadian composer named Greg Levin, who had just been hired by Syracuse University.

Their first performance was a Greg Levin piece with a brass quintet in the Everson Museum’s Sculpture Court, along with a John Cage composition. In that first 1971-1972 season, SNM presented five concerts. Today, they present more than 35 concerts and multimedia performances each year.

Pilgrim credits all this growth to the artistic creativity of SNM’s board members, whose ideas just keep sprouting more ideas. It was board members and other enthused supporters who found venues beyond the auditorium—historic homes, churches, libraries, parklands and woodlands.

Artists on the board suggested concerts amidst art exhibits. A regional composer married to a choreographer integrated dance with performances, and that was actually the beginning of SNM’s “Vision of Sound” series, now in its 17th year. SNM also brings listeners “Fresh Ink,” a regular radio program of contemporary music on Syracuse’s WCNY-FM, Sundays at 4 p.m.

As a tribute to its dynamic and varied programming, SNM has received numerous national and state awards and recognitions. It also receives generous funding through local and NYS arts grants, foundations and private individuals.

Drawing on regional talent as SNM does, it was a natural next step to coordinate the mentorship and development of school-age musicians. “It was board member Billie Burdick’s idea to have composers-in-residence in the schools,” Pilgrim said, “since students learn how to write and create art but they don’t learn to create their own music.”

Each year, SNM recognizes two 30-and-younger composers in New York state, with awards named after two gifted composers from the Syracuse arts and academic communities, the late composer and pianist Brian Israel (1951-1986) and the late composer, pianist and organist Sam Pellman (1953-2017). SNM also features young talent from the schools in their concerts.

Certainly, all generations can certainly appreciate the new and unexpected ways of interacting with music. When sight, sound and motion collide as they do in many of SNM’s events, the young as well as those with an inner child can find themselves finger-snapping, foot-stomping, hopping and swaying to all kinds of interesting arrangements. “Paradise” at Cazenovia’s Stone Quarry Art Park, for instance, had families wandering among the park’s woodland paths, listening to the sounds of nature as well as recordings and becoming instrumentalists themselves by stomping their feet on a soundboard that activated bird tones wired in tall trees.

“We don’t want any two seasons to look the same,” said Pilgrim.

They have a different series every summer for Cazenovia Counterpoint, an annual festival showcasing CNY arts. They commission a musical score in the fall in collaboration with the Syracuse Film Festival, which annually presents a milestone silent film accompanied by a live orchestra or band playing, of course, a home-grown composition. “Vision of Sound” will expand from two pieces to three this year. And at the same time that SNM keeps its programs coming, the organization is also partnering with Symphoria and Syracuse University’s Setnor School of Music on a regional conference of the Society of Composers, Inc. in November.

Pilgrim knows well that CNY has plenty of creativity-in-residence.

“We used to joke that people in Central New York could brag that their neighbor was a Pulitzer Prize winner, and indeed four of SNM’s commissioned composers by the 1990s were Pulitzer Prize winners, three of whom had first been performed by SNM while graduate students,” she said. “Four more have been finalists and several have won Grammys and other prestigious awards. They are your neighbors. You get to know the creative artists who move to CNY. They enrich the community with their performances, their teaching, and their involvement in the community.”

Ultimately, SNM reminds CNY that we all inspire and thrive on music together.