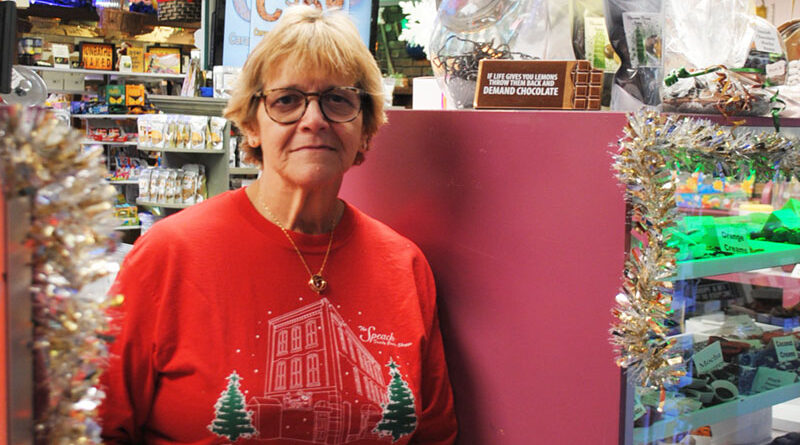 Sue Speach didn’t expect to be a business owner.

“Never in a million years would I have thought I would own a business,” she said.

And she hadn’t been until 1982. Up until then, she had been a schoolteacher.

In 1982, she and her husband, Michael, took over the Speach Candy Company, a business that had been in Michael’s family since his grandfather, also Michael, opened the shop in 1920.

As the third generation in the family-owned business, the couple breathed new life into the enterprise, expanding it and adding a retail component. Sue had continued teaching school until 1986, and by the end of 1987, she and Michael had also expanded their family with three children — Michael Jr., Melissa and Connie.

Much has changed over the past three-plus decades. Sue transferred ownership to her son, Michael Jr., in 2007; Sue’s husband died about two years ago; and the business name has changed to Speach Family Candy Shoppe.

But yet Sue, at age 65, is still involved, helping her children, Michael Jr. and Connie, in the shop.

When Sue and Michael first began, they were working out of their home, but eventually moved to a small shop on Burnet Avenue where they were able to sell directly to customers from the small counter space in the front while having the manufacturing in the back.

They relocated to Old Liverpool Road, but parking was difficult for customers, Sue said.

Eventually, they took over the shop’s current spot at 2400 Lodi St. on Syracuse’s north side. Michael’s father, Ernie, had owned the building, the former Court House restaurant, less than a mile from where the business was originally begun on North Townsend Street.

From here, they continued to operate both the retail and wholesale sides of the business, with Sue crediting Michael for being the “go-getter” while making sure their candy was in some of the area’s grocery stores.

When Michael became ill, Sue had to make some changes. She said she needed to step back and take care of her husband and find a job that offered benefits.

“I needed to start thinking about the future, and my son was willing to hop on board. He really has made the business really more than I could have imagined,” she said.

When she turned the shop over to Michael Jr., she took a job at the U.S. Post Office. She continues to work there from 10 p.m. to 6:30 a.m., and then she comes into the shop to help out.

“I still have that connection here,” she said. “Now I don’t have any of the pressures to keep things going. Michael has really found his niche.”

Today, she helps package the candy, dips chips and fruits in the chocolate, and sometimes decorates the tops of those decadent truffles, which have become a trademark of their shop.

“I love having her here,” her son said. “It’s quality time. We’re doing what we both love doing and we’re doing it together. We’re working on projects.”

And she’s a good sounding board for him.

“If I’m thinking of a new idea or a new project or something new I’m working on, it’s nice to have someone to get a little feedback from,” he said. The word “family” was incorporated into the business’ name several years ago, and it is quite appropriate. Family — whether immediate, extended or “adopted” — has been key for Sue.

When she and her husband first started in the shop, balancing the needs of her family and the business were hard, she admitted, and she explained that she had a lot of support from extended family.

Her parents, aunts and uncles and Michael’s uncles had all come into the store and pitched in to help, she said.

“They donated hours and hours to us really. It was a family affair. Even the people we hired ended up being part of our family,” she said, with a deep undertone of gratitude.

The Christmas holiday has always been the candy shop’s biggest season, so much so that the family didn’t celebrate Christmas on Dec. 25. When they did a few days later, it would be an occasion marked by family and employees alike.

“When we did do something, we would include our family from here. We would have Christmas dinner and we would have people that were with us every day. They were our family. We know them so well,” she added.

Family memorabilia is scattered throughout the shop, including portraits of the founder, Michael; two of the founder’s sons, Ernest and Joseph; Michael and Sue; and Michael Jr. and a collage of photos from the shop’s earlier days.

“Grandpa Speach”, as Sue calls him, got his start in the candy-making business with the old Coughlin Brothers, a local candy shop that also made cough drops. It was here that he learned hard candy.

But being an immigrant from Italy, Grandpa Speach’s recipes were in Italian, Sue said. And of course, as anyone who has inherited family recipes knows, measurements are not always included.

So while some of the recipes have been handed down, many have been developed over the years.  For example, Grandpa Speach didn’t make truffles; but today, the decadent candies are one of the store’s trademark treats.

Grandpa Speach’s legacy lives on in Sue’s home in Liverpool. A self-confessed lover of antiques, she said she has his copper kettles, his stoves and thermometer, spatulas and a special scoop he used for his peanut clusters.

Over its 100 years, the business has certainly withstood the test of time and is now surviving a pandemic. Sue credits Michael Jr.’s technical know-how and his drive for helping the business survive the past few months.

“If it wasn’t for his online connections, we definitely wouldn’t be here,” Sue said.

They partnered with Amazon in the summer of 2020 to offer a “Chocoholic Survival Kit” subscription. Each month, a lucky recipient receives a box filled with assorted chocolate treats, including assorted handmade milk, dark and white chocolates, and chocolate-covered potato chips.

Because the Speaches realized that throwing a 100th anniversary celebration was not possible due to the pandemic, Michael Jr. began the “10 Decades of Giving event, in which they joined with 10 different nonprofits from January through October.

Each month a chosen charity received a percentage of the sales. The program was inspired from the idea that “10 good deeds a day can change the world.”

And while a good chocolate shop might not change the world, it has — and will — continue to delight Central New Yorkers for 100-plus years.

Photo: At 65, Sue Speach is still involved in Speach Family Candy Shoppe, a business started in 1920 by her late husband’s grandfather Michael Speach