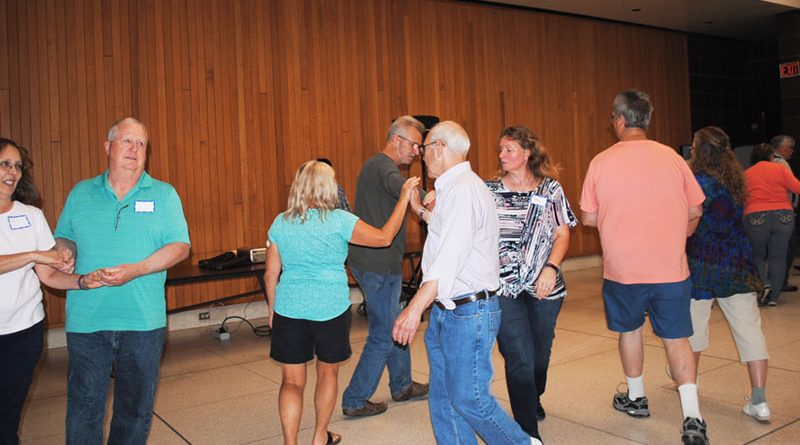 Members of Fulton Shirts ‘N Skirts still swing their partners ‘round and ‘round!

This is not your grandmother’s square dancing.

The Fulton club of square dancers call themselves “Shirts ‘N Skirts,” a name that harkens back to their beginnings in the 1950s, but their attire is very casual. Most of the members on a recent Friday were dressed in jeans, capris, and T-shirts. The flounced skirts are optional.

There are no Western-styled shirts, string ties, kerchiefs or cowboy boots. And the music is more current.

The club does what is referred to as modern Western square dancing. It meets every Friday evening at the Fulton Municipal Building from September through spring, and it’s set up as a class. Caller Dave Eno explains a few new steps each week, and then puts them all together with upbeat music he has chosen.

One of the only prerequisites, he told the class members during a recent gathering, is that they know their left from their right.

While it may be considered a class, there are plenty of members who have been coming for years.

Allen, the club’s president, and her husband, Bruce, have been members for about two decades, but she’d started square dancing as a young girl in Hannibal.

“I was the only one that ever liked dancing in gym class. Then when I was a teenager and in 4-H, our county 4-H had a square dance club,” she said. They would practice throughout the year, culminating in a competition at the New York State Fair.

“We’re always trying to encourage new dancers,” Allen said. ”Particularly in this day and age, we’re realizing what a benefit it is to seniors.”

Square dancing not only gets people moving, it is also a good mental exercise, keeping one’s listening and memory skills sharp.

“You have to be able to listen and think quick because the calls just keep on coming, and you have to be ready,” Allen explained.

Square dancing tends to attract more mature audiences, but there is quite an age range in the Shirts ‘n’ Skirts group — from pre-teens to a dancing veteran at the age of 92, Walt Hobble, who’s been part of the group since the mid-1980s.

One family who home-schools their children is using the classes to help meet physical education requirements.

And while the music and clothing have been updated, one thing apparently hasn’t changed, and that’s the fun that dancers are having, whether they’re promenading, allemanding, or do-si-do-ing. Even a few missteps here and there are laughed off.

Patti Griffin was invited to the group about 10 years ago, and she’s been returning every year.    “What keeps me coming back is the friends that you make here,” she said. Pat Whaley, who has been a part of the group since 2006, echoed Griffin’s sentiments.

“It’s great exercise; wonderful people, and a lot of fun. Those are my criteria. We laugh all the time,” she said.

One couple, Karen Lynch and Stef Mueller, came to the group for the first time last year, and they’re back for a second season, making the 40-minute trip in from Wolcott every week. While Lynch had done square dancing years ago, she was interested in starting up again, and got Mueller to join her. Like the others, they enjoy the social interaction and physical exercise. “It gets you up off the couch,” Mueller said.

The Fulton group is one of nearly two dozen clubs that are members of the Rochester Area Federation of Western Round and Square Dance. The federation includes other groups in the Rochester area and its suburbs, as well as Auburn, Liverpool, Bath, and Penn Yan. The classes in Fulton are mainstream and for all levels. Other chapters offer more advanced levels, with more steps included in the choreography.

The classes are $5 per person per evening, and they are open to individuals and couples alike. Since the participants are learning new steps each week, it’s preferable that those interested start in the first few weeks of the fall, so they can catch up quickly.

For more information, visit squaredancingrochester.org, click on Our Clubs and scroll down to Shirts ‘n’ Skirts.