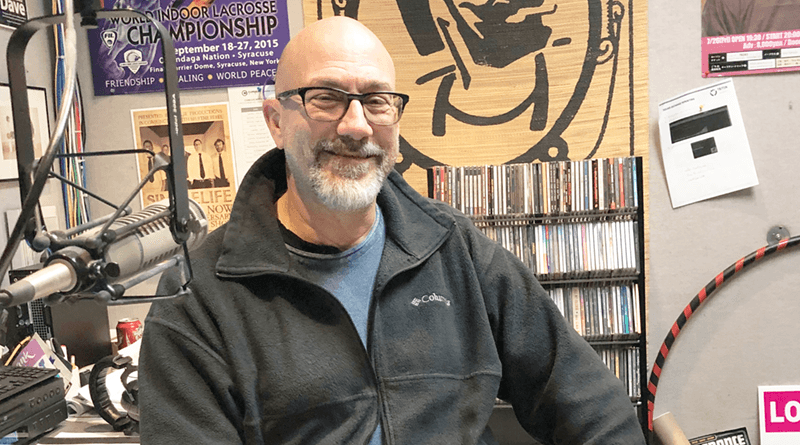 Milestone’s celebration uncertain since DJ expects classic rock  WXTL-FM (105.9 The Rebel) to be off the air, following its sale

For the 35th anniversary of his long-running radio show, “Soundcheck,” Dave Frisina marked the occasion with a live broadcast from the Eastwood Palace and the “Salt City Waltz,” a tribute to The Band’s 1976 concert, The Waltz. Scores of local musicians took a turn on stage, Frisina served as the evening’s emcee and there wasn’t an empty seat in the house.

At the time, in 2014, Frisina said he didn’t think there would be a 40th anniversary of “Soundcheck.”

Today, with that milestone on the horizon, the veteran radio host isn’t sure what he will be doing or if there will be an on-air celebration. As this issue of 55-Plus was going to press, Frisina learned that his radio station, classic rock WXTL-FM (105.9 The Rebel) had been sold as part of a debt reduction move by owner Cumulus Media. By the end of May, Frisina said, The Rebel and its associated programs, including Frisina’s “Soundcheck” and “Soulshine,” both of which air on Sundays, will be off the air.

Frisina launched “Soundcheck” in 1979 on WAQX-FM (95X) and it has had “several brief intermissions” over the years as its founder and host changed locations on the radio dial. In late February, the news of The Rebel’s sale and departure from the airwaves had not yet been made public, and Frisina was uncertain of his next chapter.

“This is not to say that I’m going to hang up my headphones forever, but I don’t have any immediate plans,” Frisina said. “I love what I do. Maybe if something else comes up that seems interesting and fun and that I can contribute to, I will explore that opportunity. In the meantime, I haven’t had a summer off in 40 years, since I graduated from college.”

In an era of automation, syndicated programming and stations going silent, Frisina is a seasoned, hands-on radio pro who is deeply connected to his Central New York base.

He didn’t set out to be a radio personality. He grew up on Long Island, where he played sports as well as trumpet and horn in junior high and high school. He came to Central New York via SUNY Cortland, where he studied physical education and aspired to be a phys ed teacher. In his leisure time, he played tunes on the student-run radio station, WSUC.

While looking for a teaching position following graduation in 1978, Frisina heard about a start-up radio station in Syracuse that was looking for on-air talent. The station was album-oriented rock station WAQX-FM (95X). He applied for a weekend slot and got it, joining a handful of 20-somethings in the launching of the station. Frisina knew no one in Syracuse and often headed out to clubs to hear music. “I really liked the scene,” he recalls. He pitched the idea of a local music show to station management and “Soundcheck” debuted shortly thereafter.

During his 25 years at 95X, Frisina worked weekends, overnights and a mid-day slot before being promoted to assistant program director and eventually program director. He then spent eight years at radio stations WTKW/WTKV (TK99/TK105) before landing at The Rebel in 2012.

With each move, “Soundcheck” came along for the ride. At The Rebel, Frisina serves as the station’s program director, as well as the voice of the “afternoon drive” (2 to 6 p.m.) on weekdays. On Sundays, he does split shifts as the host of “Soulshine” (10 a.m. to 2 p.m.), and “Soundcheck” (9 to 10 p.m.). Frisina describes “Soulshine” as a spontaneous, freeform, in-the-moment show, with “hand-picked selections.” You’ll hear everything from the Allman Brothers and the Avett Brothers to Warren Zevon.

Frisina has always believed that the best music around can be found right here in our own backyard. He relishes visiting clubs like Funk ‘n’ Waffles, the Dinosaur Bar-B-Que, Shifty’s and others, as well as larger venues like The Westcott Theater, to see what’s new and engage with local musicians.

In recent years, he has hosted “Soundcheck” live about once a month at SubCat Music Studios, shining the light on the diversity of artists, bands and musical genres at work here, from straight up rock and roll to rhythm and blues, funk, roots and reggae. “Where else are you going to hear Rootshock live on the air?,” Frisina says of the popular reggae-style band.

Some of the bands and band members he featured on “Soundcheck” in its early years, musicians like Joe Whiting, Mark Doyle, the Todd Hobin Band, the Flash Cubes and the New York Flyers are still out there performing. Keeping connected with the current crop of young, local musicians keeps Frisina and “Soundcheck” fresh.

He recently visited a new club, The Listening Room at 443 in Syracuse, which he describes as hanging out and listening to music in someone’s living room. And he was looking forward to checking out the scene at the new Club 11 on Brewerton Road, formerly Mac’s Bad Art Bar and the Jolly Roger. He receives dozens of local CDs and music files for his consideration each week and gets as many on “Soundcheck” as he can.

“I tend to not live in the past,” Frisina says. “There’s so much music going on. I’m always seeing stuff that keeps me interested. Nothing makes me happier than to see music in a place where it can be appreciated.”

Frisina lives in the Eastwood neighborhood of Syracuse with his wife, Jennifer. He has four grown sons, several of whom live in Central New York (and play in local bands) and several grandkids. Most days, he walks to work at The Rebel studios on James Street. It keeps him in shape and helps to clear his head before and after his workday.

Before he learned The Rebel was being sold, Frisina said he had no plans to retire. He was looking forward to serving as emcee at the annual Syracuse Area Music Awards (The SAMMYs) in March at the Eastwood Palace, soaking up some sun while visiting his mother in Florida and getting back on his motorcycle come spring.

“There is no retirement age if you like what you’re doing,” Frisina said. “I’ll just keep on doing it until I can’t anymore.”