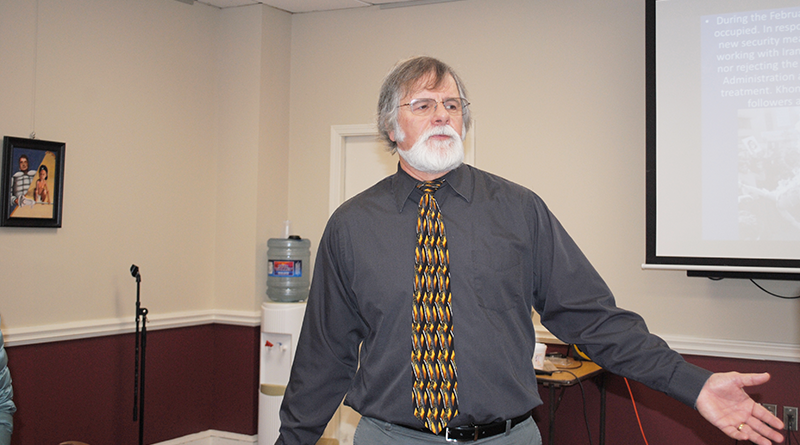 Instructor of one of the most popular classes at Oasis — on American presidency —shares his thoughts about the presidency and the U.S. presidents he would like to meet the most

A: I taught in New York state schools for 34 years. I came to SU to do doctoral work for two years. We laugh: We moved to the Syracuse area for one year 36 years ago. That second year, being a teaching assistant up at SU, both my wife and I actually got jobs in the Syracuse area. I spent my last 23 years at the Liverpool School District.

Q: Your classes on American presidency are some of the most popular at Oasis. Why do you think that is?

A: Probably good topic choices. I know people like the presentation style. I try to give the best information I can give, but do it in an interesting way. Try to tell a lot of stories. Especially for something that people are familiar with, like what we’re talking about now, you try to do your best to incorporate their experience. It makes it more fun for me. It makes it fun for them.

Q: Based on your knowledge of presidential administrations, do you have a favorite?

A: I’ve always been a George Washington fan. He wasn’t a perfect person by any means. I think when I look at the presidency and I look at American politics, the whole idea was — in their day what they would have called republican virtue — today we might call it civic virtue. It was really what George Washington was all about. He didn’t have to do any of that stuff. He was surviving well under the British system. There was no reason to go in the dirt and the mud and the lice for eight years, except that he thought it was the right thing to do. It was his responsibility to the community and the nation. He was like that as a president as well. While he’s president, it’s his sense of responsibility, the dignity that he brings to the office that really creates that office. The amount of respect and dignity he gave to the office of president is why we still have one.

Q: Do you have a favorite era?

A: I sort of like the Civil War era. But more and more, especially my own growing experiences, the World War II era, the post-war era where I grew up. As I learn more and more about that, as we’re losing that generation, and they’re telling more of their stories, there was a lot fascinating stuff. And, of course, we’re living in one of the most dynamic and changing eras of our history. In the future, they’ll look at us and say, ‘Wow, that was really something.’ You and I have lived through, basically from [Dick] Tracy’s two-way wrist radio to carrying unbelievable power in your phone.

Q: What president, living or dead, would you most like to meet and why?

A: It would still probably be Washington because I really want to know what people saw in him. I’d certainly like to sit down with Lincoln. Most certainly, FDR would be interesting. Teddy Roosevelt. I grew up not far from his house in Oyster Bay. When I was younger, we used to bicycle up to his house.

Q: In studying presidential history, what can we learn about our nation and ourselves as Americans?

A: We have developed a good system. We have had all kinds of interesting people in that office. Some very effective. Some ineffective. Some very good people. Some not so good folks. But we as people survive that. It’s a system that requires our input, it requires responsibility on our part that we then, in turn, expect from these people that represent us as that level. As long as we have that type of civic commitment, we’re going to be fine. Every president has faced criticism, and yet they all got elected. But we and they need to go back to what I was just talking about. Remember that sense of civic responsibility and what it’s all about. We will not always progress happily, but our rights will be maintained.