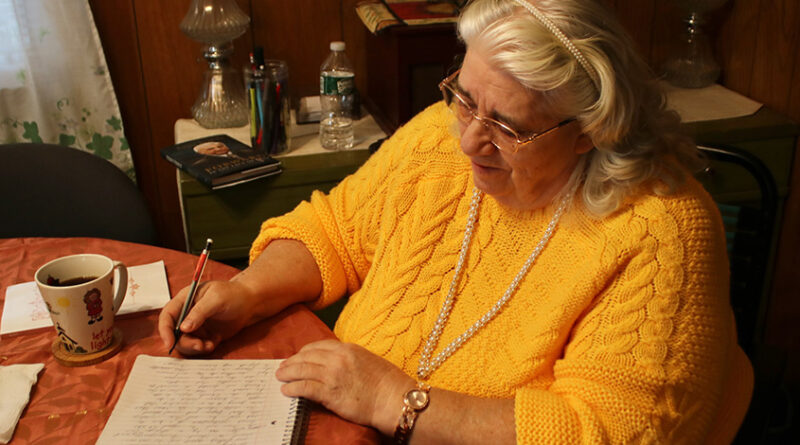 Sharon L. Hann of Auburn: from operating a drill press in a factory to writing books

What does a 71-year-old grandmother do to pass the time? She does all kinds of crafts and needlework. It’s filled a room in her apartment.

And she enjoys the company of one of her grandkids, Kory, who helps take care of her.

But there are moments when something else hits her. A feeling. An idea. A whisper.

On those occasions, she writes. And Sharon Hann has put together a book that has been 15-some years in the making.

“Hope Faith Love,” which was published in August by RoseDog Books of Pittsburgh and is available on Amazon, is an unusual work because it is a collection of plays, some not more than two pages long.

Sitting at her Auburn kitchen table with pearls around her neck, dressed in a yellow sweater and barefoot, Hann patted the tablecloth. “Right here,” she said. “That’s where I do my writing, or over there on the couch.”

Once the work is fleshed out and all “quirks” are removed, she walks into the next room and sits down in front of the computer to type out a finished product.

The first play came about by accident.

Hann and her friend, the late Eleanor Treat, were talking in church about how kids are misled today, “why it’s so hard to get them to believe in the Lord. Parents don’t realize what they’re doing to their children, it’s like the blind leading the blind…and something clicked.”

That click was the play “Blind Leading the Blind,” the kick-off work in the book, which has 12 plays in it.

As simple as the play is, its message is a central theme for Hann. She adds a “Thought” section after each play, partially to explain the substance underlying the play and what she wants someone to think about as the takeaway.

“We met at church and got to talking about what the play is about. We are blinding our children by telling them about Santa Claus and the Easter bunny and tooth fairy. We tell our children, after a while, that those are fairy tales, they’re not real people. They learn from other kids or their parents that Santa Claus is a fake,” she said.

“Then in church we tell about how Jesus was born and the Virgin Mary and how he died on the cross and that he ascended into heaven and all the miracles he did. The kids think that’s fake, too.

And now we don’t understand why kids don’t believe in the Lord. We’re leading our kids — the blind leading the blind. Kids are blind as to what we’re doing to them.”

Hann and Treat did the play at the church, the Port Byron Missionary Baptist Church, and everyone liked it.

After she wrote “Blind Leading the Blind,” an Easter play followed, then another for Thanksgiving, and later, a Christmas play.

“I had four or five plays done and I sent them to a friend of mine in New Hampshire. She used to be a school teacher. I asked her to read them, and her husband, because he was a pastor. They’re the ones I dedicated the book to. (Patricia Johnson and Pastor Hoyette Johnson). She called me up and said, ‘Sharon, they’re great, publish them.’”

Hann explained that she’s writing for two audiences: “Those who are not saved, so they can be saved, and for those that are saved and don’t realize the things I’ve put in the book, to open their eyes to reality. Time is short. The end times are here. If one person gets saved, the book is worth it.”

The road to published author certainly didn’t get started in school. “I hated English,” she said. “But I enjoy writing. I wish I had learned more so I could write better. I enjoy sitting down and things come to me and I can write. I don’t have a plan. Sometimes I don’t even name the play until I’ve written it. A theme will come up and I just start writing. It just flows.”

She and her husband, Ronald, worked in factories in Weedsport, Auburn and Port Byron and in the state of Washington, criss-crossing the country a couple of times following the work. Two kids were born in New York, one more came in Washington. She divorced Ronald and worked jobs at Leonardi Manufacturing, and nights and weekends at Ames, to keep the family fed. Eventually, carpal tunnel surgery in both hands finished her working career.

In her heart, she sees churches using her book. “A church will get this book because they want to put on a Christmas play. It’s copyrighted but people have my permission to use the plays as long as they don’t turn it all around and change it. They can change a word here and there — but not change the meaning. If they’re reading it out of curiosity and some of the plays are good, they may use them as an example to change their lives, show their kids different things. If their kids are having a problem that’s related to one of the plays, it lets their kids know what should be right. The book is to be used.”

“He asked me, ‘Grandma, you’re always telling us there’s head knowledge and heart knowledge. What’s the difference? How do we know what the difference is?’ “I heard his question and I said to myself, ‘OK, Lord — give me the answer.’” Hann said.

Her answer was that everyone knew who the president of the United States was. Then she asked, “Do you know his likes and dislikes? Do you always want to be with him? Do you want to please him and not hurt his feelings or hurt him in any way? If you don’t know the answers to those questions, you don’t know him. That’s head knowledge.

“You love your father. You don’t want to hurt him, you want to do everything you can to please him, make him happy. You know his likes and dislikes. You like being with him. That’s heart knowledge.

“Here in Sunday school, you know the Lord. You know of him. You’re being taught about the guy, you know of him, that’s the head knowledge. If you want to serve him and do what he wants you to do because you want to please him, to make him happy, and you love him like you love your father, that’s heart knowledge.”

And Kory got his.

Featured image: “Hope Faith Love” is a collection of plays, some of them not more than two pages long.