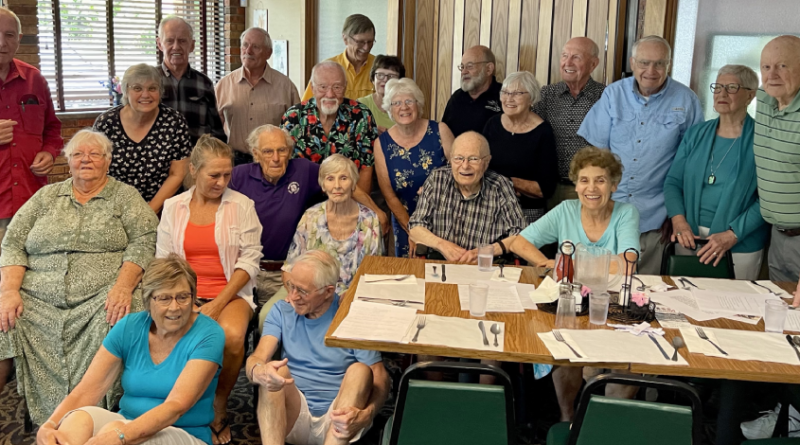 When 55-Plus last caught up with Art Zimmer in 2015, the former owner and publisher of the Syracuse New Times was immersing himself in volunteer work and community projects. Now well past a decade into “retirement” and approaching his mid-80s, the Hamilton resident and philanthropist should be slowing down some.

“Got time for a few stories?” Zimmer, 84, cheerfully asked during a recent interview at the Cazenovia Library. He had an armload of books, maps, advertisements and other documents. “We have a lot going on right now.”

Many of those stories are in Zimmer’s latest book, “I Did it My Way: The Art of A to Z. An Odyssey Through the Life of Art Zimmer.” He penned it in 2019, but due to the events of COVID-19 has not had a chance to promote it much.

With the shutdowns behind him, Zimmer dove head- first into so many ongoing and new projects, including publishing calendars and commerce guides of Hamilton and Colgate that promote local businesses.

He is still involved with the Boy Scouts and oversees an annual festival commemorating the Hamilton Chocolate Train Wreck (which he hosts on his own property). There are also the reunions he organizes for the Onondaga Ski Club and an all-class reunion that’s attended by generations of Hamilton High School alumni.

And all this from an Army veteran who successfully owned and operated 13 multi-million-dollar businesses en route to accomplishing himself as an author, playwright and community organizer.

After his military discharge in 1962, Zimmer enjoyed the fruits of his labor as a salesman for the National Biscuit Company. But then he was fired from jobs that followed, including the American Heart Association, Brown Newspaper company (now Eagle newspapers) and the Gold Crest Radio and TV Parts Supply Company.

“I decided right then and there that I would never get fired again,” Zimmer wrote in his book. “How would I accomplish that? I would just never work again. Wow! What a revelation.”

Despite his string of firings, Zimmer became an excellent salesman and a wise negotiator. In 1984 he bought the Syracuse New Times, settling the bankrupt publication’s $100,000 bill with the Internal Revenue Service for half that amount, Zimmer had sold newspaper ads before, but his journalism experience was limited to writing a ski column for the Syracuse Post-Standard for $10 a week. According to the book, the quality of the writing was so bad that, when Zimmer began the column in 1979, the editor at the time, Bob Atkinson, initially fired Zimmer because his copy was barely readable. Zimmer laid a guilt trip on the editor, saying be boasted to his ski buddies that the column would be a regular feature. He was hired back on the condition that he turned the column in three days early so the copy could be cleaned up in time for publication. This continued for four years.

Zimmer’s New Times venture was motivated by his desire to continue a ski column, but this time the struggling writer-turned-publisher focused on quality. When the name Art Zimmer appeared on the paper’s mast head the first week of September 1984, he thought: “I wonder what my high school teachers would think of that.”

Five years later, the New Times made the list of Inc. magazine’s 500 Fastest Growing Companies in the United States (No. 259 out of more than 20,000 U.S. companies at that time).

During the years that followed, New Times’ circulation increased from less than 2,000 to as high as 88,000 some weeks and by the time he sold the weekly in 2010, annual advertising revenues had exceeded $1 million. Though the New Times was Zimmer’s first publishing gig, it was not his first go-round as an entrepreneur. In theearly ‘60s, Zimmer manufactured and sold maple syrup candies to help cover expense he incurred commuting to Mohawk Valley Community College in Utica.

The New Times published its last issue in June 2019.

Although that was before the pandemic, Zimmer said the paper would not have been able to stay afloat very long after COVID-19.

“The entertainment (venues) closed and that would have stopped the advertising. No way a paper like that could survive,” he said.

Zimmer, once known for driving flashy convertible cars and always wearing an ascot with bright clothing, makes no apologies for touting accomplishments.

But he is also critical of himself, calling his Zimmer Motor Car Company and newspaper press club awards “ego trips.” The book is just as much of a feature of the odd situations he finds himself in as it is of  his successes:

There’s Zimmer’s narrow miss with death when, as a 12-year-old milk delivery boy, he dropped off the bottles on his elderly customer’s front porch instead of knocking on the door as usual because he was in a hurry to go the movies. He thought it was strange that so many lights were on in her house but didn’t have time to investigate. Zimmer found out the next day that, around the time of the milk delivery, 81-year-old Mrs. Neff had been bludgeoned to death by a hammer at the hands of a 16-year-old killer from Clinton.

There was the trip to Acapulco, Mexico when Zimmer and wife almost got caught in the crossfire when their spunky driver-cliff diving guide tangled with an angry produce seller who pelted fruit at their car. There was an unidentified flying object Zimmer spotted in the Hamilton skies that he, to this day, still cannot explain. There’s a picture of Zimmer with his ski buddy, rocker John Oates (of Hall and Oates) in the Argentina Andes.

The book is also a testimony to Zimmer’s wife of 35 years. Shirley, a retired Spanish teacher, recently took up tennis and pickleball at the age of 70. She also has an extensive resume of volunteer work in the Hamilton community. For Art’s 80th birthday, Shirley had her husband’s favorite fare at their favorite breakfast restaurant, Flour & Salt, listed on the menu as “The Zimmer.” The specialty sandwich — sausage, scrambled eggs, Swiss cheese, tomato and parsley — remains on the menu today. Zimmer said he wants to write a book about Shirley’s life, but she won’t allow it because she’s too modest. They enjoy a reputation as Hamilton’s power couple.

The Zimmers never had children, just cats. Said Art: “I didn’t like kids, even when I was one.”

For a short stint in the 1950s, Art Zimmer watched two younger boys that lived down the street from him after their father made an offer he couldn’t refuse: Get them to bed and you can watch our television.

“It was a good deal,” he said, “because my parents didn’t have a TV. I think, back then, they were afraid I wouldn’t leave home if they got a TV.”

True to form, Zimmer doesn’t like politics and will walk away from anyone who brings up that subject. He called the New Times a left-wing rag at the time he purchased it and said the staffers he inherited were a bunch of ‘60s hippies. Over time, the publication become more centered while still enjoying a reputation as cool and hip. Zimmer said he never laid off any employees and he didn’t meddle in the paper’s editorial operations beyond prohibiting all employees from smoking in the building. There were only two occasions where Zimmer axed content: The first was a recipe for marijuana brownies, the other was a piece that the publisher felt disrespected military veterans.

In the space between his last interview, the pandemic and the (somewhat) return to normalcy, Zimmer convinced Colgate University to donate five acres of vacant land to a local cemetery association, assuring its existence for another 300 years. He put his savviness to the test again by delivering the successful sales pitch that convinced a Hollywood movie company to film “Pottersville” in Hamilton. The producers were originally considering nearby Cazenovia as the best location. The movie, which is about the search for Bigfoot, premiered at the Hamilton Movie Theatre in November 2017 before it was released on DVD. It’s still available on Netflix.

These days, Zimmer is busy planning an all-class Hamilton reunion for July 3, 2023. The Zimmers recently took a trip to the Thousand Islands. Before that they visited the Canadian Maritime Provinces. They used to travel internationally more often, but due to their increasing age “and the changing world,” Zimmer thinks most of their future trips will be in the United States. They spend much of the winter in Destin, Florida, where the couple spends up to six hours a day walking, using the gym and swimming.

Their diet consists of salad, seafood, chicken and turkey. They began limiting their red meat intake and avoided smoking “years and years before it was fashionable,” Zimmer quipped.

Even though he’ll soon be heading to the sunshine state for several weeks, Zimmer is already thinking about the next opportunities to support his community, whether it is mentoring new business owners, honoring the next Eagle Scout or finding new ways to put Hamilton on the map. In that sense, Zimmer will never be retired.