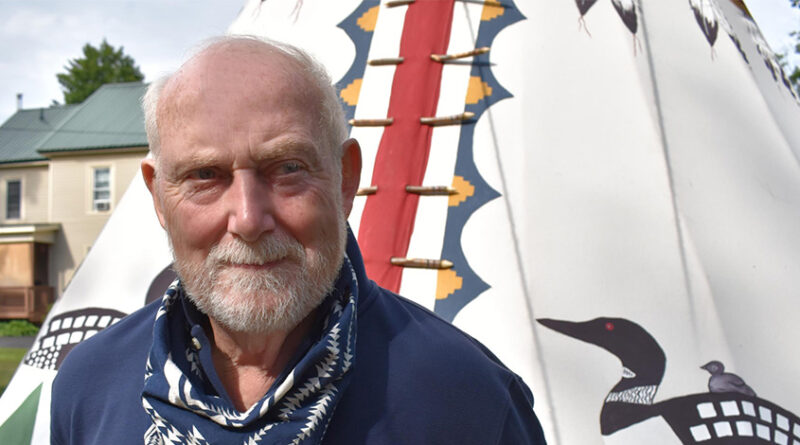 ‘I wanted to pass something on’

It was a warm summer morning on an otherwise quiet street, but nearly everyone who passed Ron Jardin’s house did a double-take when they spotted the full-size tipi in his front yard.

He didn’t mind the gawking. Jardin invited each person onto his lawn for a closer look, encouraged them to step inside the structure and promised to give a tour later once he finished with an interview.

Jardin, 71, of Mexico, began building the authentic Sioux tipi last October. He was diagnosed with cancer a couple years ago and has received treatment on and off since then. But he’s been determined to make sure that fact doesn’t define his existence.

“I’m not a quitter,” he said. “I continue to smile every day faced with this little inconvenience.”

An avid outdoorsman, he’s remained active, camping often and spending time with family, including his adult son and daughter. Last summer he and his wife vacationed out West, visiting Mount Rushmore, Wounded Knee, and Yellowstone and Grand Teton national parks.

As busy as Jardin was, however, he realized last year that he needed a new project to focus on.

“This tipi project was a mental health project,” he said. “It kept my mind off of me.”

He wasn’t exactly starting from zero. He had already constructed three tipis in the past, but they had deteriorated over time. The last one, which he built about 30 years ago, had been damaged by squirrels while in storage. 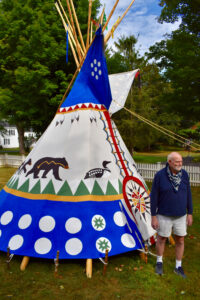 Jardin’s love of tipis began nearly half a century ago. He was born and raised in Fulton, but attended college in Colorado. The summer after his senior year he spent several weeks staying with friends who were living in a tipi.

“I was just fascinated by being inside one,” he said. “The sun wakes you up in the morning and you can see the stars at night.”

He became so enamored that when he returned to Central New York he decided to make one himself. He got a copy of Reginald and Gladys Laubin’s “The Indian Tipi,” the bible on Native American tipis, and began doing research. He gathered the necessary materials and cobbled together a serviceable tipi.

After college, Jardin became an elementary school teacher in the Mexico school district, teaching physical education for 42 years, including a 10-year stint teaching art, before retiring in 2016. He also coached track and cross-country for 45 years.

He and his family were involved in historical reenacting. They’ve also built a snow sculpture in their front yard each winter for the last 30 years. The sculptures grew so elaborate that they became an annual neighborhood attraction. But rodeo favors the young and snow sculptures, no matter how beautiful, eventually melt. A tipi, however, can last for decades. 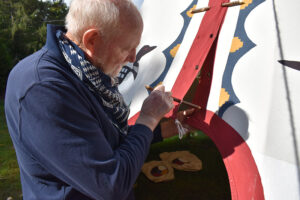 Each subsequent tipi Jardin’s made has been better than the one before. On the surface it’s a fairly simple structure, consisting of a conical framework of poles, a cover, a liner and stakes to hold it down. But making a quality tipi — one that remains cool in summer, warm in winter and dry during rainstorms — requires careful attention to detail.

Once Jardin decided to make a new tipi he began by ordering 84 yards of canvas. Native Americans originally used buffalo hides, but canvas became popular in the second half of the 19th century. Jardin spread the canvas out in his driveway and measured it to be sewn together into a giant semicircle that would wrap around the framework of the tipi. The seams are placed at diagonals so rain doesn’t build up anywhere.

By the time he’d found someone to sew the canvas, winter was on the way and the weather made it impossible to paint the cover, so he worked on the tipi liner and carved the wooden stakes and lacing pins he needed.

Jardin still needed to find poles, 15 for the tipi’s framework and two for the smoke flaps. The tallest needed to be 24 feet long, but only about four inches wide at the base.

He spent several months making trips to eastern Oswego County and the North Country until he finally found an Amish carpenter whose brother harvests 30-foot poles that he sizes and uses in furniture making. Jardin knew from experience that he’d have to wait several months to get the poles he needed with the bark trimmed off.

“If you cut them in winter you can’t get the bark off, so you have to wait until spring,” he said.

In the spring Jardin picked up the poles. He took 19 so he’d have a few extras. He tied the 24-foot poles onto the luggage rack of his car with the help of a trailer-hitch mounted shelf and took the backroads home.

The poles didn’t have bark on them, but all the tiny knots and branches had to be trimmed off and smoothed with a hatchet. Otherwise they can rip the canvas or collect raindrops inside.

“If it’s raining out, it will rain inside your tipi two hours after it stops raining,” Jardin said. “This way it’s so smooth the water goes right off it and out the tent.”

Jardin was receiving cancer treatments at the time, which sapped his energy and slowed his progress to trimming just a few poles each day. That was also the case when it came time to paint the canvas, which proved to be the most challenging part of the project. He could only work on days he had both the energy and good weather.

The canvas was also so large that it had to be staked tightly outside on the ground. He would unfold the canvas, stake it down and begin painting with a two-and-a-half-inch brush. He had to leave enough time for the paint to dry by evening.

“By 7 o’clock at night I had it all packed up and back in the house,” he said.

He knew if he made a mistake he’d be stuck with it. He used a compass, nail and string to measure out the stripes, a dinner plate for the circles and cardboard templates to trace the animals and other designs in pencil on the canvas.

Native American tipis weren’t always painted, but when they were the overall design was unique to the owner. They often included geometric shapes, animals and battle scenes. Jardin wanted the finished product to resemble an authentic, functional tipi rather than a piece of artwork, but he still decided to incorporate images relevant to him as well as traditional symbols.

The circles represent the sun, the moon and the circle of life; the bottom border and triangles symbolize the Adirondack Mountains; and the top border represents the sky, the heavens and the Great Spirit. The bison signifies sacred life and abundance while the bears represent strength and courage and the pine tree stands for peace, longevity and wisdom. The loon symbolizes the wilderness of the North.

When everything was finished Jardin set the tipi up in his backyard to test it out. He lashed the three main poles together, pulled one of them apart to make a giant X that he propped up with a step ladder, and then held the frame up with rope and a stake. He pulled the third pole out to form a giant tripod. The other poles went up around the tripod, wrapped with rope to bind them together. The final pole, known as the lifting pole, had the canvas tied to it at the top so it could be wrapped around the framework and staked down.

After he set the tipi up in his backyard, Jardin took it down, packed everything up and set it up at his family’s camp in Redfield.

He invited family and close friends to celebrate the tipi’s completion and take a tour. He served a meal that included corn on the cob, venison and bison burgers.

Afterward he moved it back to his house and set it up in the front yard and a steady stream of people began stopping to ask questions.

Jardin, who said his wife and daughter helped him throughout the tipi’s construction, plans to take it down soon, but he’s already thinking about making another. The next one would be a smaller version roughly seven feet tall that his daughter could easily set up and take down on camping trips.

As for the current tipi, it’s been about more than just satisfying a mild tipi addiction or finding a project to focus on. For all the joy he took from building it, Jardin said the project was about creating something that his family could enjoy for years to come.

He’s quick to point out that it’s not just the physical tipi that he’s sharing, but also his knowledge. He said his wife and daughter have learned how to put up and take down the tipi and that his daughter helped with enough of the construction that she could probably make a brand-new tipi someday if she wanted.