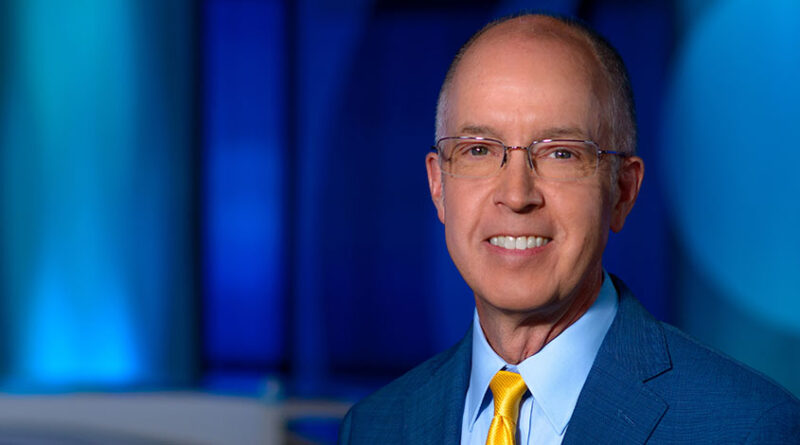 When he was growing up in the 1970s, Jim Teske and his family ate dinner with the evening news on in the background.

“And for whatever reason, I don’t know exactly what it was, I gravitated toward the weather,” Teske said.

His fascination with weather was such that when he was 7 or 8 years old he started writing down information from the forecasts on pieces of paper and saving them in a little metal box.

His first humble foray into weathercasting came when he was a student at Pine Grove Middle School in East Syracuse. Each day he would copy National Weather Service information from the newspaper and compile it into a brief weather report to read on the morning announcements.

“For that 30 seconds, that was my little bit of glory,” he said.

Today, Teske is Central New York’s preeminent meteorologist. He’s worked for NewsChannel 9 for nearly 30 years — longer if you count a high school internship — and served as the station’s chief meteorologist since 2017.

Each evening viewers turn to him to find out if it’ll be nice tomorrow to do yard work, if their commute will be affected or how much snow they can expect.

He’s still answering their questions all these years later and he’s still passionate about it. That’s partially because of where we live.

Some regions of the United States have decidedly boring and repetitive weather patterns. On the Great Plains, for example, meteorologists often suffer through two- or three-week periods where it’s hot and sunny every day.

“There are other parts of the country where the weather patterns are stagnant,” he said. “But here there’s enough variety, there’s enough change on a day-to-day week-to-week basis to make it interesting and to make it challenging.”

In some ways Teske has never lost that sense of wonder about the weather he had as a child.

Most people who become meteorologists can point to a weather event growing up that helped spark their interest in weather and forecasting. Although Teske had been drawn to weather early on, the snowstorm that hit on Christmas 1978 sticks out in his memory as something that fueled his fascination. There wasn’t supposed to be a big snowstorm, but that evening the rain changed over and the next morning they woke up to a foot and a half of heavy wet snow.

When he was in the sixth grade, Teske had to do a paper and research project for his English class. He chose weather for his topic.

“I was still fascinated with the weather,” he said. “Part of it was growing up here and dealing with winter and snow.”

As part of the project Teske had to interview someone. His parents helped put him in contact with Bud Hedinger, a popular Syracuse-area weatherman on Channel 3 who also hosted the station’s “Bowling for Dollars” show. Teske met Hedinger and got to watch him do the weather at the TV station on James Street in Syracuse.

Five years later, in the fall of 1981, Teske was starting his junior year at East Syracuse-Minoa Central High School.

Hedinger had moved from Channel 3 to rival station Channel 9. Teske noticed Channel 9 didn’t have anyone doing the weather on weekends.

“I think I got it in my head that I could do that even though I had never been in front of a camera or anything like that,” Teske said.

Without asking his parents, the 16-year-old cold-called the TV station and asked to speak to Hedinger.

“I got him on the line and I was giving him my elevator pitch and he asked how old I was,” Teske said.

He was too young to be on the air, the weatherman informed him. Instead, he offered him an internship, which Teske jumped at. Soon he was coming to the station after school.

Back then Channel 9 was shoehorned into ShoppingTown Mall in DeWitt. Teske stepped into the chaos of a makeshift station awash in cigarette smoke and where the teletype machines were constantly humming.

The weather forecasts he helped put together were presented using large magnetic boards with maps on them and Hs and Ls to represent various fronts. Two or three times a day one of the fax machines would spit out a picture from a satellite map; they’d put it on an easel so the camera could focus on the image.

In 1982, the station made Hedinger one of the main news anchors in addition to doing the weather. That put a strain on his time and the station decided they needed someone who could put the forecasts together for Hedinger. There were two interns at the time, but the station chose Teske to be a part-time weather assistant. His parents agreed to let him take the job as long as he could balance it with school.

Monday through Friday, Teske would go to the station after school and then come back in the evenings to work on the forecasts. As much as he enjoyed the job, it was difficult to balance with being a high school senior and after six months he left the job. The experience had still affected him deeply.

“That probably cemented what I was going to do later on,” he said.

Teske attended SUNY Oswego for two years and then transferred to Penn State University for its renowned meteorology and atmospheric science program.

While in college he interned with private forecasting company AccuWeather and by his senior year had a job there doing radio weather forecasts for markets around the country. Teske strongly considered a job offer from AccuWeather after college, but said he decided to take a job as a meteorologist at a TV station in Burlington, Vermont.

The pay was low and the station in Burlington was small, but Teske gained a tremendous amount of experience and picked up downhill skiing as a hobby. After five years in Burlington, he took a job at a station in Portland, Maine.

A year later, a management change had him looking for a new job. He wanted to stay in the Northeast but his most promising offers were in Texas. During a phone call with his mother she mentioned that the weekend meteorologist at NewsChannel 9 had left.

“I was ecstatic,” he said. “In the back of my mind there was always that hope that I would be able to come back.”

Teske still loves weather, but he said it’s remarkable how much the technology has changed since he started his first job in the late 1980s and how much the demands have grown.

“I was drawing with magic markers on paper maps,” he said. “Those were my graphics when I started.”

The station had started using computers, but Teske still started his days by visiting the National Weather Service office in Burlington and bouncing ideas off of the meteorologists there about the day’s forecast.

Now the amount of weather data available is mind-boggling, Teske said. He begins each day by checking to see what happened overnight and if there are any developing trends.

“I mean it starts the minute I get up,” he said. “I open my computer here at home and start working on the forecast early in the day.”

No kids, no pets

After years of being on TV, Teske is often recognized in public. Sometimes people blame him if the weather is bad, but most people are nice and say they enjoy his weathercast. He said the hardcore fans who visit the station’s booth at the state fair are especially nice.

Despite his notoriety, Teske leads a fairly low-key life outside of work.

“I don’t want to say I’m a minimalist, but I lead a very simple life,” he said.

He and his wife, Mary, who is retired, don’t have kids or pets. But he said they have plenty of nieces and nephews they enjoy visiting and doting over.

Teske doesn’t downhill ski anymore, though he and his wife enjoy cross-country skiing.

He took up golf when he played on his high school team, but gave it up in 2014 when he had a short stint doing the morning weather and co-hosting “Bridge Street.” He was getting up at 1 a.m. for work and found he enjoyed an after-work nap more than being out on the links, though he’d like to pick up golf again.

The early hours proved to be such a drain that Teske got himself a gym membership.

“I felt like I needed an outlet given these crazy hours,” he said.

He started out doing strength training and running on a treadmill, but got bored and switched to an indoor track, working his way up to three miles. He decided to enter a local 5K race one year and found he enjoyed running.

Now he does a couple races a year in Central New York and has even finished a half marathon.

Despite a demanding work schedule Teske has made time to visit hundreds of classrooms over the years, teaching students about the various kinds of weather Central New York experiences. They’re often surprised to learn that Teske was very shy in high school.

“One of the things that always terrified me in school was speaking in front of the class,” he said. “At the beginning of the school year I would always be looking in the syllabus to see if I had to speak in my classes.”

So how does he manage to provide weather forecasts on TV every day? For one thing, he loves talking about the weather. For another, most of his job involves talking to a camera, which he likens to a one-sided conversation.

“And as long as you don’t have in your head that you’re talking to thousands of people watching on the air, I think you’re fine,” he said.

Children in general are very inquisitive and often ask great questions about the weather such as what causes storms or how different kinds of snow form. Younger children often ask him if a tornado is powerful enough to pick up a dog or a cow (it is).

“They’re fascinated like I was when I was growing up,” he said. “So hopefully I’m planting a seed in some of these kids, but hopefully they realize if you put your mind to it and work really hard you can do just about anything.”