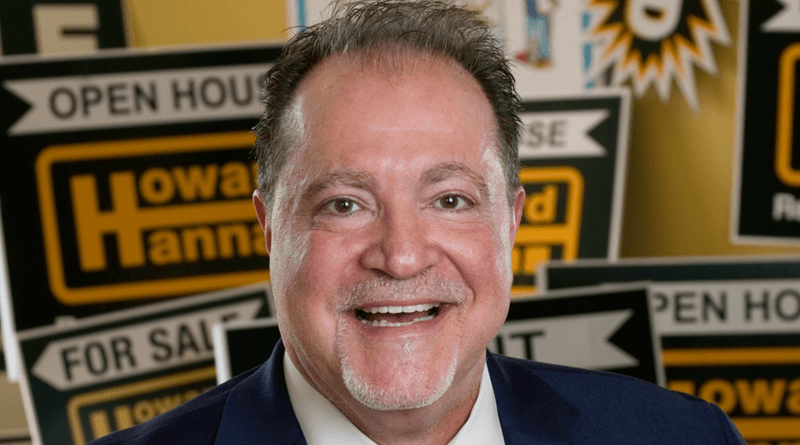 Mark Re can’t recall the last time he had a bad day.

That would seem unusual in real estate, a seemingly cutthroat and ultra-competitive profession that can be heartbreaking at times. But as a broker, executive, mentor, community service volunteer and amateur theater performer, he follows a simple philosophy for everything he’s involved with: Always make your best effort, be honest with yourself and others, and treat people with kindness and respect.

“That’s the only way I know,” said Re, 61. “People can quietly make a difference without trying to draw attention to it. I just see it as, ‘do it for the next guy.’”

Although Re, vice president and regional manager of Howard Hanna Real Estate Services, never intentionally set out to win the Crystal Ball from the Central New York Sales and Marketing Executives organization, he was chosen as the ideal recipient for this 43rd annual award.

It is to be presented on April 30 at the Marriott in downtown Syracuse. Each year, the organization recognizes one business professional who visibly impacts the progress and prosperity of Central New York; who demonstrates commitment to superior quality and professionalism; who fosters excellence in their industry and involvement in community and civic organizations; and who demonstrates and practices an appreciation of the sales and marketing industry.

Re has won several performance awards during his 39 years for his accomplishments in real estate and was also recognized by the United Way for his contributions to the community. He has served on many nonprofit boards, including Onondaga Community College, Upstate University Medical Hospital, Crouse Health Foundation, Community General Hospital, Cortland Repertory Theatre, the Salt City Center for the Performing Arts, Syracuse Symphony Orchestra, and the Salvation Army Advisory Council.

The guy who started selling houses at the age of 21 paid his dues along the way.

A native of Camillus who still works in an office there, Re grew up with two brothers and two sisters. He was the second youngest. Their father owned a construction company and their mother was a homemaker. As a family volunteer activity, the Res cleared a plot of land on Split Rock Road and helped build Kings Park. They were also hobby farmers, caring for chickens and a dozen horses on their property. Every child had weekly chores.

“They helped us to develop a work ethic,” Re said.

Re attended Bishop Ludden High School, where he befriended Terry McAuliffe, a Syracuse native who became governor of Virginia and remains a major player in national politics. Re continued his education at West Virginia University. There, he joined the Kappa Alpha fraternity and became president of his pledge class, getting his first taste of a leadership role. But upon returning home after his freshman year, Re found it more financially worthwhile to work at his father’s construction company than to continue with college.

It became apparent to Re that, in the common tradition of Italian families, his oldest brother would take over the family business, so he sought a career change. Not long after they were married, Re’s wife, Nancy Pasquale, a realtor, challenged her husband to sell houses for a living.

“She said Re stands for real estate,” he recalled with a laugh.

Off and running at 21

He approached John Gallinger, the owner of Gallinger Real Estate, and asked: “What do I need to do to become you someday?”

Re was hired on the spot. He grew a beard to look older so customers would take him more seriously. During his first three months on the job, Re was the top seller in his office.

In order to be eligible for promotions, Re needed a degree. He enrolled in Onondaga Community College full time while also continuing on full time as a realtor. He took some theatre courses to fulfill his electives requirements and found that he enjoyed the performing arts immensely. Upon graduating from OCC with honors, he was hired to a management position at the age of 27.

The following year, he pursued his other newfound passion, acting, and joined the Salt City Playhouse.

“The first play was ‘Jesus Christ Superstar’,” he said. “It was my first time on stage. It scared the heck out of me, but at the same time, I loved it. I tell my real estate agents — learn to be comfortable being uncomfortable.”

Re and his wife sold houses as a team, which was uncommon in the 1980s. “When we were together,” he said, “we listed and sold everything.” But the practice of team sales was discouraged at Gallinger, so Re’s wife returned to college to pursue a career in teaching.

At the age of 33, Re was a vice president at Gallinger. He continued to excel in a fluctuating market when interest rates for mortgages were as high as 18 percent. The Gallingers decided to sell the company, giving Re less than a year’s notice that he would eventually be reporting to a new boss. Re attempted to buy the company himself, raising several million dollars within six months. When he was ready to hand over the money, John Gallinger informed him that he already agreed to sell the business to his best friend.

Re quit and accepted a position with a competing firm where he could obtain ownership and serve as president. Two days later, John Gallinger told his former employee that competing against Re would ruin his retirement. Re then accepted the offer for an executive vice president position where he would have free range to sell properties and manage the company as he saw fit.

In the years that followed, Re turned down generous opportunities to sell real estate in California, Florida, Washington state and Illinois. He also walked away from the chance to be president and owner of a Seattle firm.

Gallinger was later acquired by Realty USA, which, in turn, was acquired by Howard Hanna three years ago.

“What kept me here is my family,” said Re, who oversees 14 Howard Hanna offices in Central and Northern New York. “I’m really glad I stayed.”

Re oversees some functions for commercial real estate, but has always specialized in selling houses. He has worked through several recessions, booms and busts. What many long-time residents do not realize, he said, “is Central New York is a steady eddy. We don’t appreciate hugely, but we don’t depreciate hugely.”

Collectively, the agents who work in Re’s 14 offices sold 91,000 homes in the last three years. The transactions ranged from $30,000 ranches in a Syracuse blue-collar neighborhood, to a $5 million mansion in Skaneateles. The average sale price for Central New York homes right now is $125,000. “This is definitely an affordable town,” Re said.

He also noted that during that time, Howard Hanna ranked No. 1 in New York state in real estate sales, and was No. 3 in the nation. When he was with Realty USA, that company also obtained the No. 1 in the state honor, and at one time was No. 9 in the nation.

He added the local housing market has been hot the past two years. Some listings have sold in two hours, and it’s not unusual for homes to sell for $10,000 or more over the listed price when several prospective buyers express interest in the property.

Chris Teelin, manager of Howard Hanna’s Cicero North Syracuse office manager, the current president of the Greater Syracuse Association of Realtors and a longtime friend of Re, said his boss has an uncanny ability to keep track of so many things at once. Re can be accountable to hundreds of people, yet he always returns every phone call and never blows anyone off.

“He’s a hardworking dude,” Teelin said. “It would be daunting to others, but he handles it well. He’s got a mind that is really, really sharp. He does not forget things.”

Teelin and Re were competitors for several years, but became friends while both serving on the Greater Syracuse Association of Realtors, and Re later recruited Teelin to work for him. Re has been credited with fostering a positive environment for everyone in what is otherwise an extremely competitive industry.

“When we were competitors, he was always the guy on the other side of the fence that was constantly working,” Teelin said. “But with the association, which is the Switzerland of realtors where people can work together, you need someone like that who is very smart, very straight forward and can think clearly.”

Mark and Nancy Re never had children, so they have had time to volunteer in their community and serve on nonprofit boards, particularly those that benefit the arts, education and medicine.

They established an awards program for high school musicians and organized past Salvation Army fund-raising luncheons where they had the opportunity of working with Richard Gere, actor and North Syracuse native. Re also judged the SALT local performing art awards show and served as chairman of the OCC Advantage Scholarship program that partners with five local high schools. Scholarship recipients must demonstrate a strong balance between academics, athletics and community service during all four years of their high school career. Income is not factored into the criteria.

“I’ve had parents come up to me with tears in their eyes and say, ‘My kids would have otherwise not had the chance to go to college’,” Re said.

Re estimates that he and Nancy are out of the house five nights a week, attending board meetings, fund raisers or social events. When they can catch a break, the couple loves to take in Broadway shows and travel. They own a condo in Fort Myers, Fla. and have been to Maine, California, Arizona, Canada, Mexico, France, England, Switzerland and Italy.

“Italy is the best,” Re says. “Sometimes it seems like we live to work, but they work to live. There’s something special about eating dinner at 8 o’clock at night.”

He is up at 5:30 every morning and rarely stays up past 11:30 p.m. To stay in shape, he takes long walks outdoors and runs on a treadmill. He also loves to cook, utilizing Italian recipes handed down from his grandparents.

Re is heavily involved with the Cortland Repertory Theater. As a board member, he works on fund-raising campaigns and selects future productions. As a performer, he has had a few small parts in some plays and worked alongside the paid professional actors the board hired for major roles.

“He follows up with the actors he’s met and travels to see them perform with other companies they’ve worked for,” said Kerby Thompson, artistic producing director of Cortland Repertory Theater. “He’s very passionate about anything he gets involved with. He enjoys theatrerso much and has so much admiration for the actors. He just loves this whole world.”

Re said he was “totally shocked” to learn that he would receive the Crystal Ball award, mainly because it’s typically given to a company president, owner or chief executive officer. He is humbled by the honor and feels more motivated than ever to continue serving his community. He anticipates retiring within five years and hopes to eventually spend more time in Florida, but he can’t foresee walking away from theater and community service.

“I’ll always want to keep giving back,” he says.