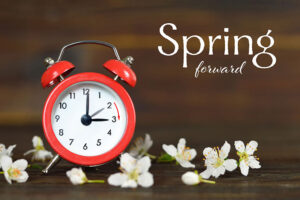 This is the memory jogger that reminds us what to do with our clocks when we enter and exit Daylight Saving Time. (Just for the record: It is “Saving,” not “Savings.”)

For some reason, there always seems to be an unusual amount of attention to the time switch, which this year took place at 2 a.m. on Sunday, March 14. As they have annually, pundits and opinion writers weighed in on its pros and cons.

As I have gotten older, I am all in when it comes to the question of year-round DST. I wasn’t such a fan when I was younger and had to get up and dress for work in the dark.

If you thought there was controversy this year, you should have seen and heard the screams of protests in 1973, when DST became year-round. Parents and the education community, especially, were highly critical of the move, because students had to trek to their bus stops in the dark for months at a clip.

When I retired and now roll out of bed sometimes as late at 8:30 a.m., I say give me more daylight.

Year-round DST was prompted by the oil embargo initiated by the Organization of Petroleum Exporting Countries (OPEC) to try to conserve fuel. Congress passed and President Richard Nixon signed this “experiment” into law, and it took effect on Jan. 6, 1974, but lasted just 15 ½ months.

Proponents and opponents engaged in a contentious debate. The proponents argued that there would be increased daylight hours in the spring and fall for recreation and reduced energy demands for lighting and heat. They also suggested that it would reduce crime and motor vehicle accidents.

Opponents were mainly concerned about children leaving for school in the dark and the dangers that this implied. When we had year-round DST, sunrise in the dead of winter in our area was not until around 8:30 a.m.

The law was amended in October 1974 to return to standard time for the period beginning Oct. 27, 1974 and ending Feb. 23, 1975, when DST resumed. When the trial ended in 1975, the country returned to observing what is known as “summer DST,” the system we are living under now.

The issue isn’t really about DST; it’s about standard time. U.S. Sen. Marco Rubio, R-Florida, has reintroduced a bill to make daylight saving time year-round. Rep. Vern Buchanan, R-Florida, introduced companion legislation in the House of Representatives. Their legislation is consistent with a vote in the Florida state legislature to adopt DST all year long.

I am not one of the snowbirds who wing their way to warmer climates in the “Sunshine State,” but more than a dozen of my friends and family do, and, not surprisingly, they are split about whether they would like year-round DST.

Proponents of DST have cited major medical research that questions the advisability of changing of clocks twice a year. A study four years ago tracked a spike in the number of cases of depression, while a European study two years ago found an increase in heart attacks associated with time change.

Researchers also have found the start of DST has led to car accidents, workplace injuries, suicides and miscarriages.

Of course, we need no study to confirm the sleep disruption that we experience in March and November. Researchers say it is more noticeable in the spring when we lose an hour.

Some legislators want to go in the other direction and eliminate DST. This, however, is a hard sell, and some efforts in New York state over the past 40 years have failed.

During World War I, Germany began using DST to conserve fuel. The rest of Europe followed. Congress enacted the Standard Time Act of 1918 which set DST from March 31 until Oct. 27. The concept never took hold because of its unpopularity.

If you thought there was controversy this year, you should have seen and heard the screams of protests in 1973, when Daylight Saving Time became year-round.

From 1945 until 1966, there was no federal law, so individual communities chose when to begin and end DST. As you might imagine, this, along with the already baffling time zones, led to utter confusion in some parts of the country.

After the short-lived year-round DST experiment showed few benefits, Congress enacted the Uniform Time Act in 1986, which set up DST from the first Sunday in April until the last Sunday in October.

This set-up lasted until 2009 when the Energy Policy Act took full effect, and this is the program under which we find ourselves today.

There are still plenty of pros and cons batted around today. On one hand the U.S. Chamber of Commerce hails the current change since it gives shoppers more daylight hours after work.

Most of us get really energized with extra daylight in the evening. This can motivate us to get out of the house, to take a walk, get in some outdoor recreation or even dabble in our gardens.

Many like DST because of the safety factor. After all, most of us feel safer during daylight hours. Researchers have found a 7% decrease in robberies after DST kicks in. They also point to additional safety for pedestrians since employees have additional time after work and supper to enjoy outdoor activities.

Halloween has become the second most popular holiday in the country now that trick-or-treaters can roam the streets during a longer stretch of twilight.

On the downside, sunrise in some parts of the country does not occur until 8:30 a.m. in the winter.