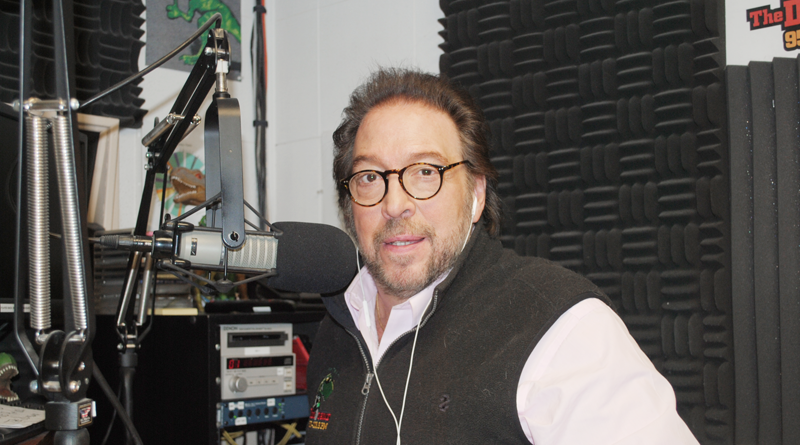 If he is not behind the microphone, he is on stage

Bob Brown has been entertaining audiences either on the air or stage for more than four decades.

These days, he might even be considered a juggler of sorts, balancing his job on a local radio station, his work with various local theater companies, and his role as executive director for the Salt City Center for the Performing Arts.

Brown is the radio personality on The Dinosaur, 95.3 and 103.9, from 3-7 p.m. Mondays through Saturdays. It’s located in the same building on West Kirkpatrick Street near the Syracuse Inner Harbor where he started his career in 1974 with the then-WNDR.

But when he’s not behind the microphone, he’s on stage, and those stages most recently and in the near future are in the Syracuse area.

“I enjoy performing anywhere,” he noted, “but performing in your hometown, I think that’s always special.”

He’s looking to stage “Unforgettable,” featuring the music of the legendary Nat King Cole, at Jazz Central in downtown Syracuse this fall. The show will feature two performers from New York, along with Brown and his wife, Cathy. Later this year, Brown is planning to do Pat Lotito’s “Dickens of A Christmas,” in which he’ll be playing Scrooge, at the Civic Center.

Joe and Pat Lotito were the founders of Salt City Center several decades ago. He appeared as El Gallo in “The Fantasticks” with the Oswego Players this summer at its theater at Fort Ontario, and he portrayed the morose Frollo in “The Hunchback of Notre Dame” with the Baldwinsville Theater Guild.

He has been busy with reorganizing the Salt City Center for the Performing Arts, a local theater company, where he found a great deal of prominence especially in the late 1970s to the early 2000s playing the title role in “Jesus Christ Superstar.”

As he sat at his mic at The Dinosaur, with a control board full of monitors and blinking lights, Brown, 63, recalled the days when he spun 45s on turntables, with teletypes clacking in the background and news reporters around.

It’s a different world with all the technology, he said, his tone a bit nostalgic for those “old days.”

But Brown and the rest of the crew at The Dinosaur continue to keep a bit of the “old days” alive with their music.

Of the station’s classic top-40 format, Brown said, “For our listeners, they enjoy reminiscing. It’s the music they grew up with.”

Even though he’s been at this for 40 years, Brown keeps it fresh with news updates, pop culture news and weather reports.

“With the weather in Central New York, there’s always something to talk about,” he said.

Although he started with WNDR, Brown has traveled up and down the radio dial locally, including WOLF, WFBL and WSEN. He helped launch 93Q with another well-known local radio personality, Ted Long, and others, and took the station to No. 1 in nine months. He’s also worked at WHYT in Detroit.

But as much as he loves radio, he confessed that acting is his passion.

Many Central New Yorkers of a certain age will remember Brown in the title role in Salt City’s “Jesus Christ Superstar,” first appearing in 1978, with his final performance in 2010.

“I used to say I didn’t think I was very good the first five years,” he said of his portrayal. “It was a daunting task to play that character, knowing what it means to people.”

However, after the first five years, Brown said he felt that his portrayal became more real and more passionate.

The quote “All the world’s a stage” that William Shakespeare once coined certainly applies to Brown, as his work has taken him all over the country and world.

Not only has he been on Detroit radio, he has been on stages throughout the United States as well as internationally.

For example, he has played King Arthur in a national tour of “Camelot,” Nicky Arnstein in “Funny Girl,” and as Mark in “ART.”

He has done “Unforgettable” in Honduras and “I Do, I Do” in Singapore. But his work in the theater is not limited to being on the stage.

He had been production coordinator for 50 to 60 shows for the Golden Apple Theatre in Florida as well as a director.

He has more than 150 film credits. Some of his favorites show his range — the title role in “Sweeney Todd,” Alan Swan in “My Favorite Year,” and King Arthur in the CNY Playhouse’s “Spamalot.”

But he said that Frollo might be topping that list. Brown’s wife, Cathleen O’Brien Brown, is also involved in the performing arts locally, and the couple played John and Abigail Adams in the 2016 CNY Playhouse’s adaption of “1776.”

The Manlius native and Fayetteville-Manlius High School graduate studied music in college. He attended Princeton, where he played baseball, but the university had an exchange program with the neighboring Westminster Choir College, so he was able to take additional classes there, study with the Grammy-award winning conductor Robert Shaw, and sing with the choir.

“A lot of my training came from wonderful actors I got to study and learn from. When you watch their methods and how they prepare, you pick up the good habits and blend them with your own,” he said.

While in Singapore in May of 2000, Brown received word that his mother had had a heart attack.

He returned to Central New York to help with her care, alongside his dad. After she died in 2008, Brown cared for his dad until he died in 2016.

That same year – 2016 – also saw the death of Pat Lotito, who with her husband, Joe, had founded Salt City Center in the 1960s, and the couple was tireless in its efforts to develop that theater group. Joe had died in 2009.

“Pat asked if I would help keep Salt City going. It was Pat’s wish that I became executive director when she was no longer able to serve,” Brown noted.

Shortly after Pat died, Salt City’s board president David Walker died as well. But Brown remained committed to carry on.

“Through the help of my friend and Salt City attorney Barry Shulman, we reorganized in late 2017,” he pointed out. Our goal is to combine local talent with some seasoned professionals, helping to foster a professional experience for our actors and community.”

Future plans for Salt City include the mounting of “Jesus Christ Superstar” in 2019, with Brown portraying Pontius Pilate and directing, he said.

How is it for him to direct someone else in the role of Jesus Christ, the role he had for 30 years?

“I started cold. I was the first,” he said. “I had to find my way into it. They have to find their way into it. And as long as their thought process is right, that’s 80 percent of it.”

So for Brown, even though he’s been at it for 40-plus years, the show goes on. Or perhaps more accurately, the shows go on.