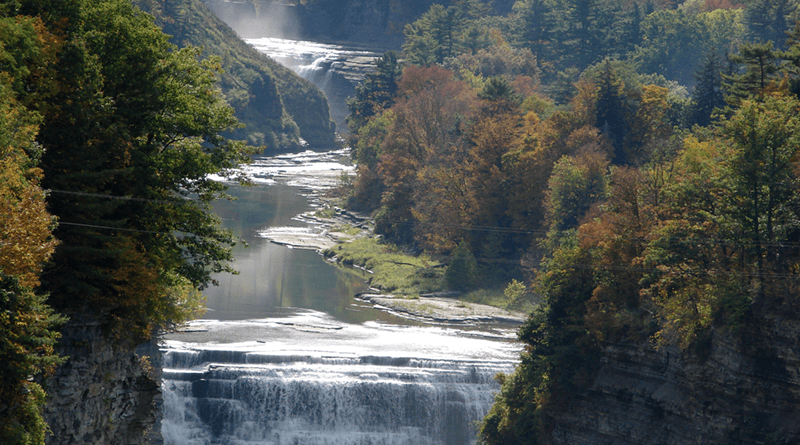 State geography has contributed to a large number of waterfalls, mostly located Upstate

New York state is evenly divided into thirds: mountains, eroded plateaus and low lands providing a variety of scenery, including many beautiful waterfalls.

Falling water provided an inexpensive source of power that helped New York state industrialize and grow. Waterfalls are magical in winter when ice covered, during the spring the snow runoff creates the best water flow. During the summer some of the waterfalls become not much more than a trickle but summer is a great time for hiking in the areas around the falls. In the fall they are surrounded by colorful foliage. It is believed that the sound of falling water has a calming effect. It can lead to de-stress, secure a sense of balance, relax and recharge.

Here are 10 waterfalls to visit in New York.

1. Niagara Falls: The falls, one of the wonders of the world, straddles the border between New York state and Canada. The iconic way to view the falls is from the Maid of the Mist. It provides an up-close view of the falls while getting anointed by the spray. Walk along the Cave of the Winds and feel the power of Bridal Veil Falls. The American falls are part of Niagara Falls State Park, the oldest state park in the United States.

2. Taughannock Falls: Located in the Finger Lakes region on the west side of Cayuga Lake, the 215 foot-Taughannock Falls is the highest single-drop waterfall east of the Rockies. There are steps to the bottom of the falls from the viewing area. It is 33 feet taller than Niagara Falls. There is a 20-foot cascade downstream and a 100-foot one upstream with trails connecting the falls. This is one of the places where the water can slow to a trickle during the late summer and early fall.

3. Buttermilk Falls: Buttermilk Falls State Park is an 811-acre state park located south of Ithaca — home to Cornell University. Buttermilk Creek descends more the 500 feet in a series of cascades with a natural pool at the bottom of the falls where, during the summer, swimming is allowed. There are informative signboards and hiking trails along the gorge and rim.

4. Lucifer Falls: The falls, also known as Enfield Falls, is just one of several in Robert H. Treman State Park, located in the Ithaca area. The easiest access is three miles up the winding hill from the main park entrance. The short path to a smaller part of the falls is wheelchair accessible but one of the most interesting features is the 1847 mill at the beginning of the path. It is open to visitors in the summer with exhibits describing the workings of the mill.

5. Watkins Glen State Park: The popular state park has two miles of water cascading down 400 feet beneath 200-foot cliffs creating 19 waterfalls along the way. The gorge path passes over and under waterfalls and through the spray of Cavern Cascade. It is closed during the winter. A rim trail overlooks the gorge. It has made the list of “The Best State Parks in the United States.”

6. Salmon River Falls: The falls is located in the Tug Hill area of Oswego County. Sign boards tell the story of the 110-foot waterfalls. The path to view the falls is wheelchair accessible but there are a few steps down to the flat area above the falls where names dating back as far as 1892 are etched into the stones. During the winter, ice climbing on the falls is popular but each climber must register daily — a form is found in the kiosk box.

7. Kaaterskill Falls: Located in the Catskill Mountains, the falls is the highest two-tiered cascading waterfalls in the state and one of the state’s oldest tourist attractions. It was the subject of paintings of Thomas Cole of the Hudson River School of painters. Visitors can get a great view of the area and falls from the new viewing platform. The trail to the bottom can be arduous.

8. High Falls Gorge: Most waterfalls can be visited for free or by paying a small park entrance fee but not High Falls Gorge. It is a 22-acre, privately owned, nature park on the AuSable River near Lake Placid. There are trails and self-guided tours. During the summer there are two glass-floor walkways and in the winter there is snowshoeing.

9. Letchworth: Letchworth State Park (Top photo) is renowned as the “Grand Canyon of the East.” The Genesee River roars over three major waterfalls — one as high as 600 feet. There are 66 miles of trails in the historic park along with a variety of family-friendly activities and a museum. In 2015 the park won the USA TODAY choice award for the Best State Park in the United States. Accommodations are available at the historic Glen Iris Inn overlooking the falls.

10. Discover some falls on your own. There are many. When Delphi Falls was on private land in Madison County it was not open to the public but in August 2018 the land became Delphi Falls County Park and is now open to the public where there are two waterfalls, a house, and a barn. Most unique is the Eternal Flame Falls. It isn’t grand but due to the emission of natural gas there is a flame in a small grotto behind the falls. There are many falls along the Erie Canal route as the land rises 566 feet from the Hudson River to Lake Erie necessitating 35 locks including Holley Falls, near Rochester; Little Falls in Herkimer County and Medina Falls in Orleans County.