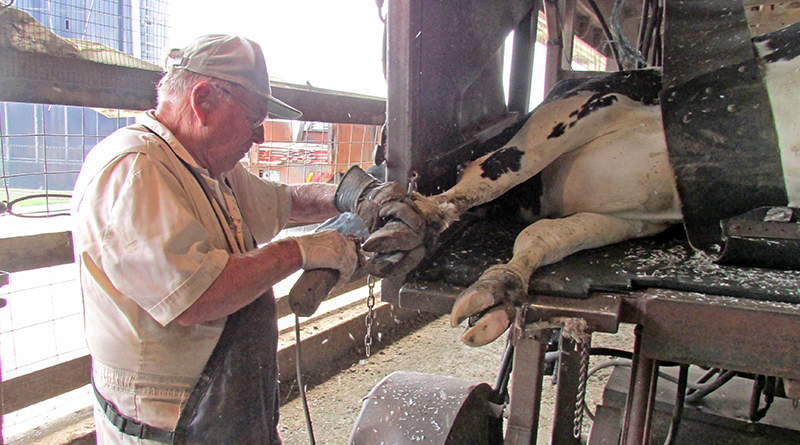 David Huxtable, an 80-year-old man from Herkimer County, has a challenging career: he gives cows pedicures — 25 cows a day 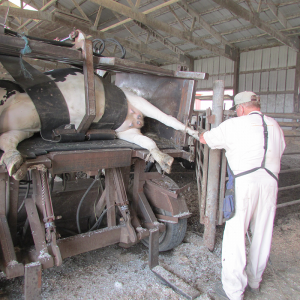 David Huxtable has spent his entire life working on his family farm in Miller’s Mills, a hamlet in the Herkimer County town of West Winfield.

He started milking cows when he was 8 years old. “They gave me the ones with the shorter teats,” he said with a laugh.

He turned 80 last March, and while he gave up dairy farming several decades ago, he never stopped working with cows.

Huxtable has one of the rarest jobs in agriculture today: He’s a hoof trimmer, a blacksmith for cows. They have hooves, and as with other mammals, the nails and teeth grow throughout their lifetime and need regular care.

As implausible as it sounds, Huxtable has a challenging career giving cows pedicures. He does it year-round, and unlike human dentists, he has to commute to his job. He has contracts with dairy farms in Madison County, Otsego County and Montgomery County, near Canajoharie.

It’s just a handful, but these dairy farms have an average of 100 cows apiece. He generally handles 25 cows a day and works a few days a week. “I used to do 35 to 40 cows a day when I was young,” he said.

At two of the farms, he plies his trade in the barns, but occasionally works outdoors in the pasture, even in winter.

In the spring, Huxtable indulges in making maple syrup, which is a brief but intensive job. Though it’s somewhat profitable and fun, “the maple business is still a hobby for me,” he noted.

Huxtable’s innate love of farming comes from an unusual source. Neither his grandfather, who was an English immigrant and minister, nor his father, who had worked as a cobbler in Boston, were involved in agriculture initially. They converted to the dairy business later in life.

“My dad was 60 when I was born and he retired when I was 4,” Huxtable explained. “I have three half-brothers who are 20 years older than me, plus a full brother [Donald] seven years younger, and all were in farming at one time. We only had 40 cows when I was growing up and we didn’t have electricity either. We milked the cows twice a day, all by hand. We also mowed hay using teams of horses.”

In 1959, Huxtable graduated from Cornell University, which has one of the most illustrious agricultural science programs in the United States. He decided to return to the farm after college. “I liked the people in the dairy business and the cows,” he said.

The Huxtable Farm supplied milk to the Dairylea Cooperative. Prices slowly climbed through the decades, but eventually the business became unsustainable. “I gave it up in 1980,” he said. “We were losing money and there was no equity in the farm.”

He began weighing his options. Luckily, his hoof trimmer had a suggestion.

“The fellow who had been doing my cows complained about a shortage. He trained me and then moved to Virginia. He sold me the works and a list of his customers. I thought I would do it for a while. I thought about working for the farm bureau, but after a year I couldn’t afford to quit and I figured we needed hoof-trimmers more than bureaucrats.”

Is it my turn?

When the cows are in the barn, they are managed easily. They are so familiar with the painless procedure that they line up willingly for their turn at trimming.

One cow at a time walks into a chute that encloses the animal comfortably. Then she is tipped on her side, a few feet off the ground about belt-high to Huxtable. He then applies an angle grinder to all four hooves. The job takes about 10 minutes per cow.

Huxtable has six children and 13 grandchildren. His daughter, Karen, is married to Patrick Hooker, who grew up in Erieville outside Cazenovia and later served as New York State Commissioner of Agriculture under Gov. Eliot Spitzer.

Although the elder Huxtable and his sons had dabbled in making maple syrup, his son-in-law introduced him to more efficient techniques.

Hooker still works for the state as an agriculture consultant and lobbyist in Albany. He and Karen live a stone’s throw from Huxtable and his wife, Carole; Huxtable’s sons, Jeff and Mark; and Huxtable’s half-brother, James — all on Huxtable Road.

The maple syrup business, too, has changed dramatically since Huxtable’s childhood. Though it is considerably less taxing physically, there is still a steep commitment in terms of time and equipment.

This year, Mother Nature decided to bless the farmers with warm weather in February, so the sap in the maple trees started running early. That set Huxtable and his family in motion, too, and they answered the call around the clock for a few days before the fickle winter resumed its normal coldness.

Then the lions of March arrived in the form of Storm Stella, dumping 40 inches of snow on the trees and the maple syrup equipment. So while most in the region were grudgingly clearing off their cars, sidewalks and porches, Huxtable had to deal with removing heavy snow and downed trees on his own 15 acres, plus several hundred acres on the Hookers’ property.

“We had to wait four days for the snow to settle, then we were able to get out on snowshoes,” said Huxtable. First, they had to break trail and wade through hip-deep snow before bringing in small plows to dig out the long lines of tubing.

In late winter, the farmers hammer small metal taps into the trees and connect them to long lines of plastic tubing, or stiles. When the sap begins running, vacuum pumps get turned on and the raw syrup in the tubes is extracted, drip-by-drip, into metal bins.

Huxtable has a modest hut a few yards from his home where he boils the sap in large evaporators.

“Our season normally runs for a month, from about the 20th of February to the 7th of April,” he pointed out, and he and the family will bottle about 400 gallons.

Huxtable has survived all sorts of physical challenges through the years. Seven years ago, he had his right hip replaced. He was planning to have his left hip done this spring, but when he went through cardiology screening recently, the doctors came back with stunning news.

He needs to undergo double-bypass heart surgery first. He will miss about two months’ worth of work, but his son, Jeff, will take over his duties.

Huxtable fully expects to be back on the job by fall. “The doctors told me to keep on doing what I’m doing,” he said. “Thanks to modern medicine, my heart will be good for another 30 years.”