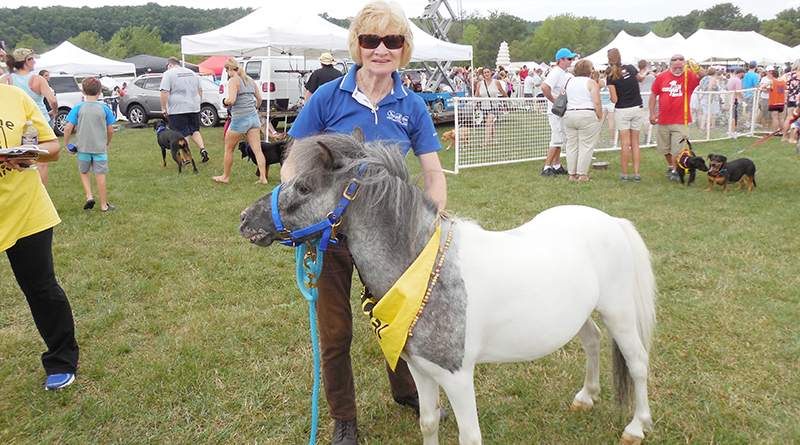 By embracing social media and working non-stop, TV personality remains relevant after more than four decades on the air

It’s about 10:30 a.m. on a frigid Sunday December morning. Inside the CNY Central television news studio on James Street in Syracuse, Laura Hand finished her work for the weekend edition of Today in Central New York, which she anchors and produces. She’s been on the job since about 3 a.m. with no plans to rest until it well after it gets dark outside again. After work, she heads home for an afternoon of horseback riding in the snow.

“It’s more fun,” she says, to stay busy. That’s been the key to this legendary local newswoman’s longevity. While many others her age in the broadcast journalism industry have been slow to accept technological and social changes in their field, Hand has continually embraced those changes. She would not disclose her age but was proud to note her career at the WSTM station is going on 45 years.

Hand took some time recently to talk about her upbringing as an “Army brat,” the events that brought her to Syracuse, her career success, and her continuing quest to make Central New York a better place.

Hand was born in Virginia. Her father, Clifton Hand, was a soldier. The family lived in England, Germany, Thailand and Italy, changing schools almost every year. Hand spent ample time in her mother’s home town of Trieste, Italy, and still visits there regularly. She calls it “a very Italian city with a very Austrian flavor.” She speaks Italian, French, German and Spanish.

While watching television news coverage of political party conventions during presidential election years, Hand became fascinated with both politics and journalism. That inspired her to apply to Syracuse University, which was one of the few schools at the time that offered political science and journalism as majors. Hand signed up for both.

“I thought it was interesting, and I thought I could do it,” she recalled. “Many schools did not accept women.”

Hand enjoyed a great deal of success at SU, becoming the first woman to direct the campus radio station, WAER, and graduating a semester early. There was a great deal of political unrest and student protests during that era, so Hand elected to get her coursework done as soon as possible and get started on a career, as opposed to remaining on campus and getting caught up in the times.

“It was during the Vietnam War,” she said. “Those were interesting times on campus, but I just wanted to get out and work.”

Hand was hired as a reporter for the WFBL station in Syracuse. She learned the art of broadcasting there but quickly decided that she would prefer to do television news. Eighteen months later, she began working at WSTM. She was assigned to provide stories for the 6 p.m. and 11 p.m. newscasts, typically working the 3 p.m. until midnight shift. Usually, she came up with her own story ideas.

Early in her career, Hand interviewed New York Gov. Rockefeller. The governor was attending an event in which he had no intention of addressing the media. But Hand and her cameraman stretched a microphone cable in front of Rockefeller, causing him to pause long enough for them to initiate an interview.

“His people told us he’s not going to do any interviews,” Hand recalled. “But we found a way. Sometimes, you have to push a little bit.”

Hand also interviewed former First Lady Nancy Reagan in the Syracuse airport. The coverage was not planned ahead of time. Hand simply approached her, and Reagan was happy to talk.

Another memorable story for Hand was covering the Tully mud slide in the early 1990s. She arrived at the scene quickly enough to provide an eyewitness account of the state police transporting the victims off of their roofs by helicopter.

“You can have a pleasant interview or cover a pretty sad story,” she said. “There’s no cookie cutter approach here.”

Hand has worn many hats at WSTM, and found a way to spend time with her family while advancing her career. While her two children were growing up, Hand took on the role of morning anchor, going into work early and getting home in time to have dinner with the family. “There are long hours in this business,” she said, “but you can make it work.”

In Syracuse, the television news market was very competitive and unpredictable. Hand survived layoffs by making herself more valuable. She was her own producer, even in an era where TV news stations had much larger staffs. She also took on additional tasks as the station’s community relations director, which involved giving tours and organizing outreach programs with schools. In addition, Hand is responsible for updating CNY Central’s daily events calendar, and making sure the station is compliant with FCC regulations.

“I just keep doing my job,” she says, “and my job is more than just the news.”

As a producer, Hand has a say on which national or international stories her station will run. Hand also writes stories that appear on the CNY Central website, and creates her own graphics. She is also expected to engage with viewers via social media. Hand did not sign up for these tasks when she went to journalism school in a much different era of television news, but she has never resisted any of the changes.

“Social media is part of the job,” she said. “If you want to reach people, you’ve got to go where they are. These are different tools than we used 30 years ago, but it’s still a process that involves critical thinking. And the best part about broadcasting still hasn’t changed: It’s never the same two days in a row.”

Hand has taught journalism courses at Onondaga Community College, Le Moyne College and Syracuse University, and has also found time over the years to take on charity work, including the Toys for Tots program and a local Tour de Cure event to benefit the American Diabetes Association.

In her spare time, Hand enjoys gardening during the warmer months and horseback riding year round. She is also a fan of Pomeranian dogs, a breed that was once large enough to pull coal carts but, during the Victorian era, was cross-bred with smaller dogs.

“Within four generations,” she said, “they were made smaller. I just find that stuff fascinating. I just want to learn how things happen. I tell kids, if you want to be in this business, you need to learn how to play ‘Jeopardy.’”

Cooking is another passion. Hand is especially proud of her grandmother’s Italian cookbook, written in 1931. Over the years she has modified some of the recipes to cut down on the calories or accommodate her children’s tastes. When her son became a vegetarian, for example, she came up with a broccoli lasagna. Hand also did cooking demonstrations at the Great New York State Fair, showing audiences how to make quick meals.

While Hand loves Italian recipes, she eats her favorite foods in moderation and enjoys healthy energy snacks, like trail mix, when working. To stay fit, Hand, rides her horse just about every day and works in her garden. She enjoys traveling, especially to Italy, but has no plans to retire any time soon and settle down in a warmer climate.

“There is still a lot going on here, like the buy local movement. It may not be the hot bed it was in the early 1900s, but there’s still a lot of creativity here,” Hand said of Central New York. “I’ve enjoyed what I do here and I’ll keep at it. Yes, I will retire someday, but it won’t be tomorrow.”