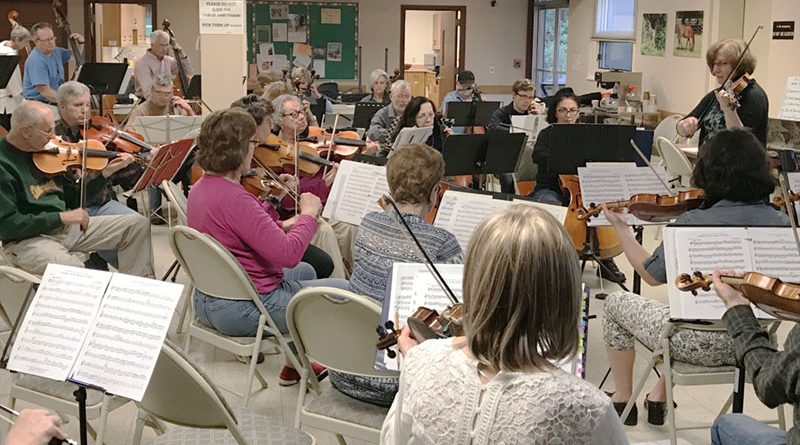 For adults, learning music has its benefits. “Many studies have concluded that learning a musical instrument uses the brain in a very unique way,” Edie Shillitoe said. “It keeps us intellectually stimulated, and the constant fine motor skills needed are fabulous to stave off aging.”

Knowing this, along with a desire to have an impact on the community, the decision to retire in 2014 was both easy and exciting for Shillitoe.

The year before, while attending a conference, she had learned about the New Horizons International Music Association, a nonprofit organization that provides adults with the opportunity to take music lessons. Knowing there was a lack of opportunities in the Syracuse area for adults to learn and practice string instruments as a group, she wasted no time after retiring to start a local branch of New Horizons — the Salt City New Horizons Orchestra.

With this group, Shillitoe, 62, is able to pass her love of music on to adults who range in age and ability.

“I have a 75-year-old former engineer sitting next to a 32-year-old teacher, and an active local veterinarian playing cello next to a retired chef,” she said in an email. “This makes for a very dynamic group, and one that is unique and different from other New Horizon groups.”

As a child, Shillitoe said she wanted to play the clarinet. However, growing up in a family of seven, she said she didn’t have much of a choice.

“When the time came to choose an instrument in the fifth-grade, a neighbor had an old violin in a closet, which was offered to my parents, so that was that.”

She started playing and never stopped.

Shillitoe has a bachelor’s and a master’s degree in music education and spent her career teaching coast to coast. She is skilled in violin, viola, cello and bass. From San Francisco, to Houston to New York, she taught students from kindergarten to high school, and has also “been lucky enough to teach string methods to music education students at Syracuse University.”

Salt City New Horizons Orchestra is a group made up of adults who maybe once played a string instrument but fell out of practice for one reason or another. There are also beginners, the people who were just interested in picking up a new hobby, or always wanted to learn. Everyone is welcome.

“And more importantly,” Shillitoe said, “there is a huge social benefit to meeting weekly with a group of friends to make music.”

For adults, Shillitoe knows how important this can be. She knows that as you get older, it’s hard to find places to meet new people and socialize. So, as much as the weekly Salt City New Horizons Orchestra is a learning environment, it is also kept light-hearted and serves as a social gathering of sorts.

Every rehearsal includes a 15-minute break that Shillitoe called “sacred.” This is the time she said members get to know each other and become friends.

“I want this to be a fun night out for the members, and I think I achieve this,” she said. “Many say it is their favorite night of the week.”

At a recent rehearsal, Shillitoe stood at the front of the room in the United Methodist Church, in Fayetteville, with the class seated in a half circle, grouped by instrument and skill level. She commanded attention, but also gave her own attention to those in attendance.

Members of the group play what Shillitoe knows: violin, viola, cello or bass. As the class progressed through the first hour, it played a variety of musical pieces. Some, Shillitoe told the class, they might recognize, others, she said, she found and thought were pretty. She also wrote the music for some in the group who are at lower skill levels.

During rehearsal, she counted and snapped to keep the group on tempo, constantly offering encouragement. When she introduced a piece of music titled “Country Wedding,” the class struggled through a difficult section. Shillitoe coached them until they hit all the notes.

“Ah!” She was excited. “Now that we are all so much better than we were — let’s go a little faster.”

The class laughed, but trusting her, followed as Shillitoe picked up her violin and led the students in the faster pace.

Occasionally, she would stop and direct someone where to place their fingers or have just one section of the orchestra play a part it was stumbling over.

As she led them into the “Great Gate of Kiev,” Shillitoe told the class that it “seems nice and easy until you hit that middle section … You’ll know it when you hear it.”

She said she wanted to get a feel during this five-week mini summer session for the pieces she plans to do with the orchestra in the fall. During the summer, there are roughly 25 to 30 participants. In the fall, the group typically grows to about 60, she said.

As the class came upon the difficult middle section of the piece, Shillitoe stopped them. “It’s going to start getting ugly,” she said, and showed each section — first, second and third violins, and the violas, cellos and bass — one at a time how to do the next notes.

“And, if you weren’t delighted by that,” implying that each section doesn’t sound all that great alone, she said, “let’s put it all together!”

The orchestra played as one, and upon finishing, a member of the group commented, “That doesn’t sound bad all together.”

To which another member replied, “it doesn’t sound that bad.” And everyone laughed.

The Salt City New Horizons Orchestra performs locally for community members who could use some happiness. In the past year it has performed at the VA hospital, the Nottingham, Francis House, Center Court Senior Living and Upstate Medical Center. The group has also joined the Onondaga Civic Symphony, the Plymouth Congregational Church, and combined with the LeMoyne College Orchestra for its 10th anniversary celebration.

“I love the community service that a music group can provide, and my musicians all enjoy performing in public,” said coordinator Edie Shillitoe.

Despite some nervousness, Shillitoe said there is safety in numbers. “The weaker musicians are encouraged by the stronger musicians. … Also, no one is forced to perform if they are uncomfortable.”

Although, every member participated last year.

Interested adults who have never played a stringed instrument are offered private lessons and group class lessons. Salt City New Horizons Orchestra also offers information about instrument rental. The goal of the beginner classes is to get students playing with the orchestra group as soon as possible.

“The past year I have been blessed to have another retired teacher and great personal friend join me,” Shillitoe said.

Becky Dodd, who conducts the younger string youth orchestra associated with Symphoria in Syracuse, works with the beginning musicians.

“Both Becky and I write music appropriate for their skill level, and we adapt and simplify the music so they can join in the performances quickly,” Shillitoe said.

New members will be accepted in September. Anyone interested in joining the Salt City New Horizons Orchestra should contact Edie Shillitoe at saltcitynho@gmail.com. For more information, visit saltcitynho.weebly.com.

Photo: Members of the Salt City New Horizons Orchestra at a recent rehearsal in the United Methodist Church in Fayetteville. During the summer, there are roughly 25 to 30 participants. In the fall, the group typically grows to about 60.