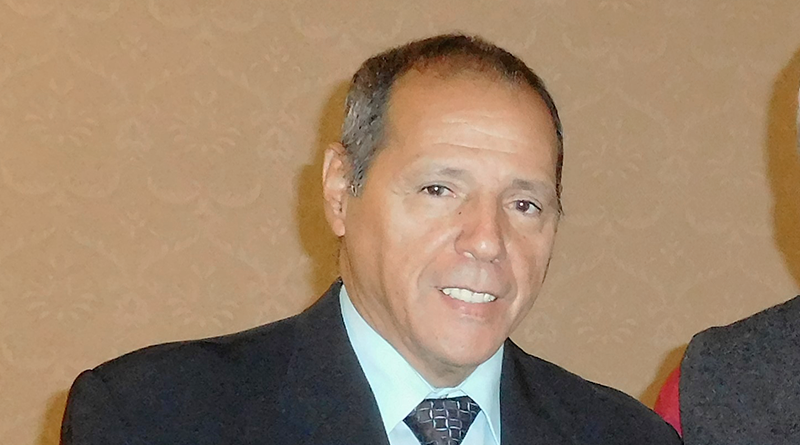 Q. You moved to Syracuse from Colombia. How old were you?

A. Seventeen. I walked through those doors at Bishop Ludden High School knowing two words of English — hello and goodbye —and scared as heck.

Q. What prompted the move to Syracuse?

A. My mom was a victim of a hit-and-run. I was just 16. It was something difficult for me to deal with. So I took the wrong turn and started doing the things I wasn’t supposed to. I dropped out of school. I quit playing soccer, which is my passion, my life. And one Wednesday evening, I was standing at the corner with the guys, feeling really cool. Here come my coach. He approached me. He said, ‘Just got a question, tell me, do you think for a second that your mom would be proud of you right now?’ That Saturday, I went to find the coach. He became my mentor. About six months later, he went to my dad, and said, “he’s doing much better, but we have to get him out of here. We have to find him a place away from peer pressure and drugs.” So I came to America.

Q. Did you have family here?

A. My sisters went to see Monsignor Costello [now Auxiliary Bishop Costello]. I was given a scholarship to come to Bishop Ludden. My first day, I didn’t like it at all because I fell three times. I’ve never seen snow, never walked on it before. But here I am 40-some-odd years later, made Syracuse my home. I have my wife — and my four girls went to Ludden.

Q. You’ve been at Ludden for decades as a coach. What keeps you coming back year and year?

A. If it wasn’t because of Bishop Ludden High School, I could be either a very rich man the wrong way or I could be buried six feet under. So I will forever and ever be grateful to Bishop Ludden.

A. Our team won the Onondaga league. I was voted the coach of the year for the league. Then I was also recently named the New York State Private/Parochial High School Coach of the Year.

Q. To what do you attribute your success?

A. Part of it had to with the fact that I’m one of 14 coaches that has over 400 wins. Don’t ask me how many exactly. I don’t keep track. I know it’s in the neighborhood of 470. It’s nice when you’re around for this long, you have continuity; people know your system. Parents know what they’re going to get from me. And what they’re going to get from me is someone who is going to give their kids a little bit of knowledge; someone who will treat them with respect; someone who will not ever use foul language. And I have surrounded myself with a good coaching staff.

Q. You’ve been involved with the Big Brother Big Sister. What’s your title there?

Q. What are some of the other programs that you do?

A. I run a project called Project Smiles. Several years ago, I was going to go back to my hometown to visit. And my wife, Elba, said, ‘Why don’t you take Andrea [their daughter] with you?’ On Dec. 25 that year, I was going to church that morning. I went through the park, and I saw a group of little girls and one was crying non-stop. I said to the Sister, ‘What is wrong ?’ She said, ‘We belong to this particular orphanage. We bring the kids out, so they can spend the money they got for Christmas.’ They each got 2000 pesos — about 87 cents. And this little girl wanted to buy a bracelet that represented the local soccer team that she loves.  That Saturday, I brought my daughter, we went to visit the home, we brought two bags of lollipops and I brought a jersey for the little girl. And she asked me ‘why are you doing this for me?’ She was 8 years old. And I said, ‘Because you remind me so much of my daughter.” She said, ‘No, she’s a beautiful girl. I’m an ugly child.’ No child should talk about herself or himself that way. We started giving out the lollipops — the grins on their faces, the smiles. My daughter said, ‘Pops, I don’t know how you’re going to do it, but you’ve got to help all these kids.’ Looks at the smiles on the faces. Thus Project Smiles. It grew from that one home to four. My soccer team every year they adopt one of the schools, and they do care packages for the kids. I try to get them all involved in community service.