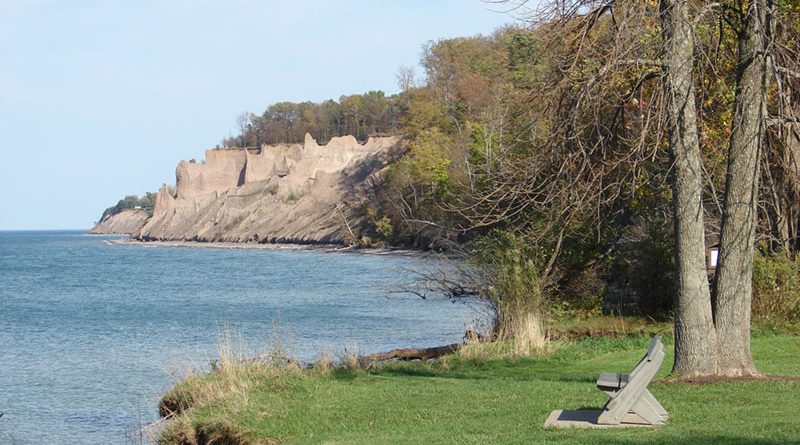 Wayne County hugs the south shore of Lake Ontario and is where visitors can enjoy fun on the lake and along the Erie Canal. The county has many interesting sites, including unique formations along the shore, the homestead of the founder of the Church of Latter-day Saints and a general store frozen in time. The Great Lakes Seaway Trail was one of the first roads in America to be designated as a National Scenic Byway. Part of the scenic drive follows the shore of Lake Ontario in Wayne County.

1. Parks: Marvel at the massive earthen spires on the bluffs of Lake Ontario at Chimney Bluffs State Park. The chimney-like spires were formed from eroded drumlins left at the end of the ice age. Wind, rain, waves and other forces of nature created sharp pinnacles some of which rise 150 feet above the shoreline. The spires have existed for thousands of year, but are constantly changing. The park has approximately four miles of hiking trails, including a mile-long trail along the bluff. The county is also home to Beechwood State Park, home of a former Girl Scout camp, and several town parks including the historic three-acre Palmyra Aqueduct Park.

2. Sodus Point: Located on Sodus Bay, Sodus Point is surrounded by water on three sides. Summertime is the best time to visit Sodus Point Beach Park to enjoy the wide sandy beach with a playground, snack bar, and changing rooms. There is a smaller beach on the bayside. Both beaches have lifeguards. Lighthouse aficionados will want to walk out on the pier to the old lighthouse and watch the boats come through the channel.

3. Sodus Point Lighthouse Museum: Situated on a bluff overlooking Lake Ontario is the Sodus Point Lighthouse Museum. The Sodus Bay Historical Society operates the museum and gift shop. Exhibit rooms depict different eras when coal and lumber were king and when commercial fishing and shipbuilding were ways of life. Visitors can climb up the spiral staircase to the lens room at the top of the lighthouse tower. From this vantage point, about 70 feet above the waters of the lake, the view is spectacular. The museum offers many events open to the public including summer concerts.

4. The Historic Erie Canal: Travel in the slow lane. The historic Erie Canal traverses through Wayne County and offers visitors a wide range of activities. Mid-Lakes Erie Macedon Landing in the town of Macedon offers a comfortable stop or convenient base for the canal traveler. Lockmaster canal boats are available for week-long charters as well as canoes, kayaks and paddleboats for rent.

5. The Montezuma Audubon Center: The center is situated in the middle of one of the most active flight lanes in the Atlantic Flyway. It is the resting, feeding and nesting habitat for waterfowl and other migratory birds.  The center offers year-round environmental education programs, exhibits and presentations. A wall of windows offers a panoramic view of restored grassland and marshes. Two freshwater marshes have been restored, 50 acres of native grasses have been planted, a one-mile hiking trail has been constructed, and an all-access observation platform has been built. They offer a variety of “hands-on” activities for the entire family.

7. Cobblestone: Architecture of Wayne County is as varied as the people who live there but one type of architecture represents Wayne County better than any other and that is cobblestone masonry. Cobblestones are small rocks that can fit in the palm of your hand. Pioneers to Western New York state found the cobblestones, which had been brought by glaciers, along the shores of Lake Ontario or in the fields they tried to plow and used them to build their homes and other buildings. The majority of the cobblestone buildings can be found in the towns that border Lake Ontario especially along Ridge Road and Lake Road.

8. William Phelps General Store: Step back one hundred years into the William Phelps General Store. It is only one of two totally original, authentic general stores anywhere with products that date back to 1860. It is an original Erie Canal General Store built in 1826 specifically to serve the Erie Canal. In 1940 the store closed and nothing has changed. The family occupied the upper two levels until it was taken over by the historical society. Nearby are the Palmyra Historical Museum and Erie Canal Depot.

9. Joseph Smith Homestead: Joseph Smith was the founder of the Church of Latter-Day Saints. Visit the reconstructed log cabin that was the boyhood home of Joseph Smith and his restored frame home. Walk to the Sacred Grove where Smith had his first vision in 1820. There are free guided tours. The Grandin Building in Palmyra is where The Book of Mormon was first printed and sold.

10. Unique: The Alling Coverlet Museum in Palmyra has the largest collection of hand-woven coverlets in America. The Hoffman Clock Museum, located in the Newark library, displays over 300 timepieces with a special emphasis on the history of New York state clockmakers. There are murals throughout the county that preserve local history through community artwork.

Photo: Bluffs of Lake Ontario at Chimney Bluffs State Park. The chimney-like spires were formed from eroded drumlins left at the end of the ice age. Wind, rain, waves and other forces of nature created sharp pinnacles some of which rise 150 feet above the shoreline.