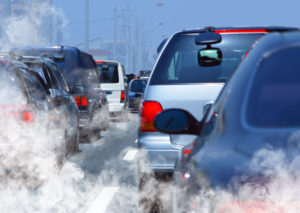 What I didn’t realize, and learned recently, is that air pollution is strongly linked to Alzheimer’s disease. Of specific concern are small airborne substances about 1/30 the diameter of a human hair, called fine particulate matter (PM 2.5) because their size is less than 2.5 microns.  (1 inch = 25,000 microns.) They are too small to see, although at high atmospheric levels, they produce haze, smog, and decreased visibility.

Their exact substances leading to Alzheimer’s risk are not known. PM 2.5 may contain various metals, chemicals and organic compounds. PM 2.5 particles often consist of many different substances clumped together, making it difficult to tease out which ones are harmful.

Studies show a link between high levels of air pollution and the risk of developing Alzheimer’s disease. This surprised scientists, who once thought that the brain was protected by a network of cells that line brain blood vessels to form a barrier between the blood and the brain. New evidence shows that there are several ways PM 2.5 can enter the brain. First, these particles can change the blood-brain barrier to make it more permeable, allowing substances to pass through. Second, particles entering nose are taken up by the olfactory (smell) nerves, and travel directly in these nerves to a part of the brain called the olfactory bulb. From there PM 2.5 spreads into other parts of the brain.

Another possibility is that PM 2.5 triggers microglia cells to release cytokines. Microglia cells are a special kind of cells found in the brain and spinal cord that form an immune defense to protect neurons (nerve cells). Cytokines are molecules that help regulate immunity and inflammation. Normally this can protect the brain against outside invaders. But chronic production of cytokines leads to chronic inflammation and ultimately nerve cell death.

A recent study showed that exposure to fine particle pollution caused structural changes in the brain and memory loss in older women. These changes were detectable before actual symptoms of Alzheimer’s developed.

Physical exercise is a lifestyle change to reduce the risk of developing Alzheimer’s disease. It increases blood flow to the brain and increases levels of proteins that promote the growth and maintenance of brain cells.