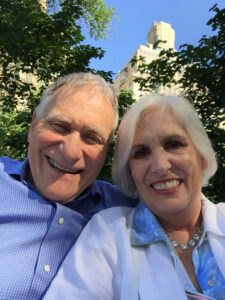 You may have read my article “On Meeting a New Companion” in the October-November 2020 issue of 55 Plus magazine. Wagner Dotto, editor and publisher of 55 Plus magazine liked this article and he wrote to me, “Fun to read it Marvin. Loved reading your latest article. Victoria should have gone on to explain more. She stops right there at the end of the second date. We want to find out more…” Also, “It would be great to have a follow-up article. I enjoyed reading the first installment.”

So, Victoria and I decided to write another article that describes our relationship since we first met at Wegman’s in Dewitt about six years ago. Hopefully, this article will cause you to reflect on your own relationships and life experiences.

In the past six years, Victoria and I have traveled together and shared many adventures. We have enjoyed trips to a dude ranch out west; the Grand Canyon; river cruises in France, Italy and Germany; Quebec City; Montreal; Canadian Rockies; and have explored local destinations such as Ithaca; Niagara Falls; Albany; New York City; Cooperstown; and Lima (the foundation for Syracuse University).

I’ll mention one of our memorable disputes. We were traveling on a ferry in Venice. I insisted that we had to get off at a particular stop. Victoria disagreed and became annoyed at my self-righteousness. She stormed out of the cabin into a raging storm outside and sat there in the fierce wind and rain. I went outside to try to calm her down. She remarked, “I like it better out here!” It turned out that I was right about the stop that we should get off at.

Victoria and I have different perspectives, and she recalls things that I barely remember. Here are some of her thoughts about our six years of our relationship.

At the conclusion of our last article I wrote, “what am I going to do with this guy?”

I found Marv to be smart, funny, good looking and kind — but quirky. What kind of a person, in a grocery line at Wegman’s, raises his arms high and announces that he is a famous professor?

After I had confirmation that he was a famous professor and had had lunch with him, I was still intrigued, and wanted to get to know him a little better … but slowly. You see, I had a committee of three family members who had appointed themselves to oversee my major decisions. Left to my own devices I could jump into things out of curiosity or a sense of adventure, only to regret my decision later and have to crawl out of it. I met with the committee and they allowed me to continue to date Marv, but no more than once a week. Period. End of discussion.

Our next date was having lunch at Wegman’s food court in DeWitt, the place of our first meeting. Marv had arrived early and had purchased a plant for the table. I don’t remember any particular details about the lunch except that he was still funny, sparkling, smart and quirky.

I mentioned that I had a subscription to the Friends of Chamber Music and that I would be attending a concert on Saturday, but that he could not attend with me as we had used up our one date a week allotment. When I arrived for the concert, I took a seat near the end of the row, and wouldn’t you know Marv showed up and sat next to me. He sat like a stone, did not look at me or speak to me the entire time — his way of spending time with me without breaking the rules.

I was curious about how Marv was perceived by others. I had gathered information that he was well known on the SU campus and had earned a reputation for unique and innovative approaches to teaching. Examples included riding a donkey on the campus, throwing answer keys to exams out of a second floor window, conducting a televised “Bio Answer Show” following an exam to give the answers, and many more antics. (Just ask him, he’ll tell you).

The opportunity arrived for me to see him in action. He invited me to one of his tours of the SU campus. One and a half hours long, he has carefully researched buildings, murals, chancellors, sculptures, focusing on details that are interesting and important but not commonly known about. We arrived at the campus and he headed straight for the bookstore. Halfway down the stairs there was a life-sized image of Marv standing there with outstretched arms. He took a picture of me standing by the cardboard Marv. The statue had become the mascot of the bookstore. Occasionally it would be adorned with jewelry and other accessories. Marv proceeded to introduce me to his friend, Kathleen Bradley, a former manager at the SU Bookstore, and we went to her office where there was ANOTHER life-sized image of Marv.

Shortly, the tour began and I watched for clues as to how he comes off and is perceived. He began talking and as he conveyed information, sometimes in excruciating detail (like how many pipes are in the organ at Setnor Auditorium at SU). I noticed that his audience was captivated, listening, smiling, engaged. He would briskly walk from one point to another and continue with still another interesting, lesser known detail. This went on for almost two hours. I came away duly impressed — “this man is a fabulous teacher,” I thought.

In time I was invited to his lake house, and it was more spacious and beautiful than I had imagined, on an Owasco Lake beachfront with fabulous views, particularly at dusk. Marv got me a glass of wine and opened up his book of poetry and read EVERY one, without stopping, then went on to the other books, i.e., “The Misadventures of Marvin,” “Mr. Moocho and the Lucky Chicken,” “Mr. Money and the Lucky Chicken,” etc — without pausing. I must admit that I love his writing; He is clever, writes effortlessly, and delivers it well. But, the percentage of Marv talk time to Victoria talk time was 95%/5% ratio. I was forgetting how to talk.

I have observed that Marv’s mouth is activated as soon as he turns on the ignition of his car. He is able to talk non-stop while driving, telling stories, jokes, anecdotes, recalling previous trips along the same route, all without expecting any response or interaction. So, I turn on my ears as soon as he starts the car and settle into listening. I acknowledge that he is interesting and entertaining, but to help my ears I began to take a hand-sewing project along on our car trips. Thousands of stitches went into my quilt, now titled “Listening to Marvin.”

With Marv, I have had opportunities for experiences and meeting people I never would have had otherwise. Look who is in the chancellor’s box at an SU football game? And in the front row at the New York ballet at the Met with his NYC friends, Perry and Mitzi Pazer? I love the Met and frequently went with friends on bus trips to an opera from Philadelphia. I sat in nosebleed seats. Once I was seated at the highest row and unable to see the top of the stage for the finale of Turandot. But when Perry walked us down the aisle further, further and further to his season seats in the front row overlooking the orchestra, I was overwhelmed with joy and gratitude.

I am deeply grateful for all of the experiences Marv and I have enjoyed together, the places we have visited, meals shared, concerts, plays and musicals attended. Marv and I have traveled extensively. Canada has been one of our favorite destinations — highlights including the Insectarium, Signaling Museum and Prison Museum.

We have looked out for each other and kept each other in our hearts. No one can predict what the future might bring; a 20-year age difference means nothing when literally “anything can happen.” For now life is good, the relationship is sound, and we continue to give each other more than either of us would have had without the other. Maybe we are both “lucky chickens.”

If you are alone, I hope that the above commentaries may have encouraged you to seek a new relationship. Some of you may have lost a spouse and are reluctant to go out into the world and seek a new companion. After 60 years of a wonderful relationship with my wife, Pat, I was reluctant to do so. Marriage is not the goal. The goal is to have someone, other than family members, to share what remains of this complex, wonderful, amazing period of time called “life.”