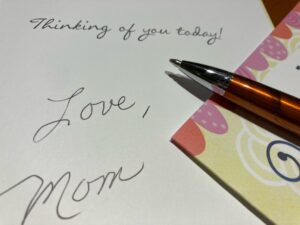 ‘Novelists aren’t the only ones saying writing with pen and paper is good for you. Scientific studies have suggested that writing by hand helps you remember things, process complex ideas, fight stress and even get better sleep.’

When I sat down to write this column, I grabbed a pen and notebook rather than fire up my laptop. Why? I was aiming to practice what I preach, and to hone my cursive chops in advance of National Handwriting Day, which we will celebrate on Jan. 23.

Each year, proponents of penmanship mark John Hancock’s birthday by celebrating their love of writing by hand. In 1977, the Writing Instrument Manufacturers Association chose the birthday of the first person to sign the Declaration of Independence as a fitting tribute to this important – and increasingly forgotten – life skill.

Of course, I doubt that any of us who grew up in the 1950s, ’60s and ’70s will ever forget the green border atop our classrooms’ chalkboards, with the letters of the cursive alphabet illustrated in white on a grid with three lines: a dotted one surrounded by two solid lines like some kind of magic highway to literacy. I remember being especially fascinated by the capital Q, looking for all the world like a giant numeral 2.

A quick survey of some of my boomer contemporaries gave mixed results. Some report their children and grandchildren were taught cursive in schools. Others reported a dying art — schools increasingly omitting cursive instruction in favor of other subjects.

Ironically, out in the modern world, people sometimes remark positively on my handwriting. But I bet the good sisters of St. Stanislaus School are spinning in their graves to see the mishmash of letters their former student calls “penmanship.” Still, I keep trying.

As a professional writer, I see quality writing instruments as a tool of my trade, and much the way a master woodworker will value a precision plane or a chef respects his finely sharpened knives, I collect, use and admire the ballpoints, rollerballs and especially fountain pens that make up my arsenal.

Many were gifts from my late husband, Bill, and several are souvenirs from our travels. Others are antiques from flea markets and estate sales. A jewel of my collection is a matched Parker Vacuumatic fountain pen and pencil set that belonged to my dad. I only have a couple of his World War II letters, but they were written in perfect cursive using that very pen after a day of driving ambulances for the Army in the European theatre. In one, he describes arriving on the scene of a liberated concentration camp, making the letter and pen true historical artifacts.

Many beloved authors found writing in longhand an inducement to creativity. Mark Twain loved his Conklin fountain pen so much, he became a spokesman for the company, which made a special Mark Twain edition, a version of which is still available today. Novelists who wrote their first drafts in longhand range from Ernest Hemingway to J. K. Rowling, who is said to have begun the Harry Potter series on the back of a napkin at her favorite coffee shop. I think they were onto something there. While I routinely type non-fiction articles and essays, I often begin fiction projects with pen and paper to help ideas flow.

But novelists aren’t the only ones saying writing with pen and paper is good for you. Scientific studies have suggested that writing by hand helps you remember things, process complex ideas, fight stress and even get better sleep.

Limiting screen time is always a good goal, and writing on paper is more restful for the eyes. Paper can be recycled, and a good pen need never be retired — it can be refilled again and again, limiting the waste that goes to our landfills. And writing in longhand exercises different muscles than typing or texting. 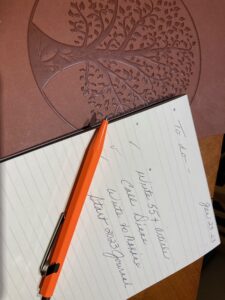 Anyone who’s had a computer crash or written something on an obsolete operating system or hardware (remember floppy discs?) knows that your information can be irretrievably lost. Your thoughts written in a notebook or journal, on the other hand, can stand the test of time. Just witness the famous 17th-century English diarist Samuel Pepys, or Anne Frank, who gave us a moving first-person account of World War II.

And while daily texts and emails between loved ones are the norm now, how sweet it will be for the recipient in years to come if you’ve recorded some words of love with paper and pen. I cherish the letters my father wrote me while I was away at college, and those my husband penned on school vacations when he was my college sweetheart.

So I challenge you, dear reader. Grab a pen this January 23, and celebrate National Handwriting Day by putting words to paper. Whether it’s a love note, the next great American novel or even the week’s shopping list, you’ll be keeping alive an important skill for the future.