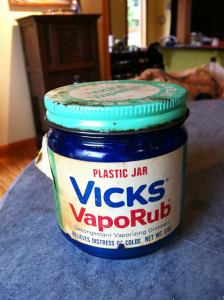 While visiting my 85-year-old brother recently, we began reminiscing about some of the bizarre medical “cures” my mother used when we were sick.

I swear she had stock in the Vicks company, now owned by Procter & Gamble. Her favorite was VapoRub. You know, the foul-smelling menthol stuff you’re supposed to rub on your chest and throat when you have a cold.

Oh, mom would rub it on all right, but then she insisted that I swallow a gob of it, too, for good measure.

Many years later, a doctor friend, unnerved by my revelation, said VapoRub is not intended to be taken internally and could have caused serious internal damage. “Look,” he said, showing me the little blue jar. “Warning,” the label sternly proclaimed, “for external use only; do not take by mouth or place in nostrils.”

Oh, yeah, I forgot to mention: She stuck some of it up my nose, too, usually when I had a head cold.

About a year before she died in 1997, when I recounted my encounter with my doctor friend, my then 91-year-old mother poohed this medical no-no. “How many days of work have you missed in your adult life?” she asked. I thought about it and could remember only two. “See what I mean: Two days in 35 years of work — you’re as healthy as a horse,” mom observed in vindication.

“And you mean I owe it all to eating gobs of VapoRub when I had a cold?” I asked with more than a little skepticism. She smiled that motherly smile and changed the subject.

My brothers and I had to wear camphor squares around our necks, too. Mom believed it kept the germs away — maybe vampires, too.

When I had a cold, my mother’s objective was to have me “sweat it out.” To that end, she would lather me in VapoRub, put on the camphor squares, have me wear two layers of clothing over my pajamas and drink a shot of whiskey. In the morning, I awoke in a pool of sweat, and, remarkably, my cold would seem so much better.

When I was born, I was really small. Back in the day, if babies weren’t two-ton-Tony Galentos, they were deemed sickly. When I was in first grade, my family doctor decreed that I needed to be “built up,” so he prescribed that when I came home from school each day my mother would see to it that I would drink two raw eggs into which a shot of Four Roses whiskey was poured. I was also instructed to eat two pieces of toast with “lots of butter.” I swear I am not making this up. I put on about 50 pounds in a one-year period between first and second grades. Dr. James Forrest, my family doc, said he was not surprised, because he believed that the egg/whiskey concoction stimulated my appetite. He must have been right, because by the time I was a senior I weighed more than anyone in my class at 204 pounds.

When my brothers or I complained about having a headache, my mom would wrap our head with a bandage that included a potato. I don’t know if it was just coincidence or whether the potato had some curative powers, but the headache would be gone within minutes. 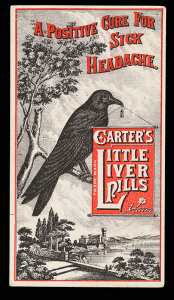 I was cursed with frequent earaches. Mom would heat some olive oil and put it into my ear, along with a plug of cotton. It worked wonders.

When we had constipation, mom would feed us two Carter’s Little Liver pills. The first time I had them I liked the sweet taste of the coating, so instead of swallowing them when mom put them into my mouth, I started sucking on them. When I had sucked off the coating, the vile taste of the pills made me throw up in the bathroom sink. Mom was not pleased.

From time to time, most kids would fake illness to get a day off from school. We never did that, because if we admitted to being sick, mom would bring out the castor oil.

We weren’t aware of it years ago, but castor oil and its derivatives are used in the manufacture of soaps, lubricants, hydraulic and brake fluids, paints, dyes, inks, polishes and some plastics. Despite this, the Federal Drug Administration still lists castor oil as an acceptable product for medicinal purposes.

Mom would generally mix the castor oil in orange juice to mask its unpleasant taste. I rarely tolerated castor oil well and usually threw up shortly after ingesting it.

So, unless I was unable to walk, I made it to school, because I knew the dreaded castor oil would be on the menu, and school was a much more palatable alternative.

Mom was a firm believer that carrots would improve our eyesight. She insisted that along with an apple a day (to keep the doctor away), I also should have a daily carrot. When I started chomping on it, I would go, “Eh, what’s up, Doc?” in a poor Bugs Bunny imitation. My mother was not amused.

My mom constantly reminded me not to sit too close to the TV for fear of ruining my eyes. Because I was an avid reader, my mother also warned me not to read in a dim light because I might go blind.

I had a bad habit of cracking my knuckles, but each time I did this my mother scolded me, warning me that this would lead to arthritis in my later years. So far, so good.

Although my mother did not use this remedy, my friend’s mother did. She would hang a clove of garlic around his neck, not to ward off vampires, but to ward off colds. Most gave my friend wide berth because of the pungent odor, which no doubt caused him to have fewer colds because of less human contact.