Roads can be a dangerous place, thanks to weavers, huggers, slowpokes and other types 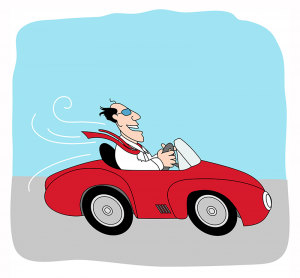 Most adults in the U.S. routinely drive a car. My first car was a 1951 Chevrolet sedan. It had amazing durability and I wouldn’t be surprised if someone was still driving it today.

I went through a progression of ownerships, including a Honda Civic and my current car, a 2015 Subaru Legacy sedan. Driving my Subaru is like driving a computer. I start the car by simply pressing on the brake and pushing a button on the dashboard. I push the same button to turn off the engine.

This feature sometimes posed a problem when I went into a store and forgot to turn the engine off. There is a light on the outside mirrors that goes on when a car is in the blind spot. There is a back-up camera and I can see where I’m going when I back up. A little cross on the backup picture screen indicates how close I am to an object when I back up (but I don’t trust it). Also, the car makes a beeping noise if there is some moving object behind me, like another car or a pedestrian. A sun roof adds luxury and air. The CD player and radio are deluxe. Playing the radio involves a touch screen. I can even heat up the rear ends of myself and a passenger next to me at the touch of a button. If the tires are low, a warning light on the dashboard goes on. There are many other modern features that I haven’t bothered to learn how to use. In short, cars have come a long way since 1951.

While driving my computerized car one day, I began to think about the phenomenon of driving. Everyone is supposed to follow rules of the road and, because such a diversity of people drive, and there are so many different vehicles, I’m surprised that there are not more accidents. I also began to think about the many close calls I’ve had and how such a great diversity of drivers manage to survive on the road.

First, I’ll mention the condition of many cars on the road. There is a tremendous variety of car types and ages in varying condition. Every day, I drive by at least two cars that have no taillight or headlight. In most cars, there is no indicator for this defect, except another driver. I wrote to the American Automobile Association (AAA) and suggested that blinking headlights twice could tell an oncoming driver that one of the car’s headlights is out. They rejected this suggestion and said, “We are more concerned about seatbelts. People should regularly inspect the lights on their car,” (which rarely happens). I sometimes follow cars into a gas station or other stopping place to inform the driver that a headlight or taillight is defective. This is a bit difficult to do when the cars are on the move.

One of the main menaces on the road is the “Weaver.” This individual recklessly weaves in and out of traffic lanes, often without signaling, to get ahead of the crowd. I have a satisfying feeling when the “Weaver” is eventually stuck in the left lane behind some cars, and I slowly cruise by in the right lane.

Another road menace is the “Hugger.” Even though I am driving at a reasonable speed, the “Hugger” stays close behind me — too close. The “Hugger” refuses to pass me, but remains glued to my rear end, whether I speed up or slow down. There’s not much I can do, except to watch the “Hugger” through my rear-view mirror — and pray that I don’t have to make a sudden stop.

The “Slowpoke” is also a potential road hazard. Driving 40 mph in a 65 mph zone is not safe. The “Slowpoke” drives too slowly, often holding up a line of cars with impatient drivers. To pass or not to pass becomes a life-threatening decision. Many factors have to be considered, such as the speed of both cars, whether there is another car in front of the “Slowpoke”, whether there is a hill ahead, the distance and speed of an oncoming car and whether or not there is a double line on the road restricting passing. Considering how all of the factors require an instantaneous evaluation, I wonder why we would even try to pass a “Slowpoke” on the road.

Then there is the “Challenger” who refuses to wear a seat belt. “I dare you to restrict my freedom in this way. Catch me, if you can. I’d rather be dead than wear a seat belt” — and the Challenger often gets this wish granted.

When driving, we have to trust our car to do what it’s supposed to do. For example, I am fearful whenever I drive down Seeley Road to Erie Boulevard in Syracuse. The hill is extremely steep, and I always envision myself not being able to stop and crashing into a car at the base of the hill. So far, so good.

I find that driving at night is disorienting. I rely on my GPS (named Carla) for directions anywhere. The “Headlighter” is a major menace at night. Many oncoming cars do not turn down their bright headlights, and this causes momentary blindness, especially if the oncoming car is coming toward you over a hill. At night, I try not to be the lead driver on a country road. Usually, I like to be a leader. When it comes to driving at night, I want to be a follower. The drawback is that, if the lead car went off the road over a cliff, I’d probably follow it.

When road conditions are icy or perilous, most drivers slow down to a reasonable speed. But, there is always the ”Suicider” who doesn’t slow down, but surges ahead at high speed, passing all cars in sight, regardless of road conditions. I’ve noticed that older drivers tend to drive more slowly and cautiously. The “Suicider” is often a younger man who drives with a grim expression on his face. When such a driver zooms by me on the road, I often wonder, ”Where the hell is he going? What’s the rush? Doesn’t he know that speed kills?”

My highest speed was 94 miles per hour. I was in a hurry to get my late wife home after a visit to Dana Farber Cancer Institute in Massachusetts. She didn’t feel well, and I wanted to get her home as soon as possible. As I approached Albany on I-90, I saw the dreaded flashing lights in the car behind me. The state trooper and I had a nice conversation while he wrote out the ticket. I was actually pleased to see that the officer was doing his job and preventing me from having a potentially serious accident. I vowed never to speed again, but it was too late.

My family branded me with the nickname “Old Leadfoot.”