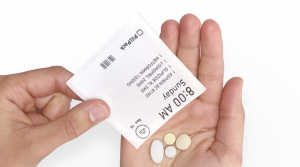 As people age, various chronic disease states become more common. More diseases, more medicines. According to the CDC, in the past 30 days 49 percent of Americans took one prescription medicine, 23 percent took three prescriptions and 12 percent took five or more medicines. That’s among the general population, I couldn’t find statistics by age.  But once a person reaches five prescriptions, plus vitamins and supplements, that’s a lot of potential for error. Add perhaps some memory loss or poor vision — a patient living alone, and the problem is compounded.

That’s what Elliot Cohen, MBA, observed while visiting his parents during a college break. He accidently startled his father who was hunched over neatly sorted piles of his multiple medications. His father turned around suddenly, accidently knocking down and scattering the pills, much to his dismay. Cohen knew there had to be a better way.

Just a few weeks earlier, Cohen and pharmacist T.J. Parker collaborated to win the Hacking Medicine competition to develop innovations in healthcare. Their idea was a solution to the problem of keeping track of many different medications. They developed the idea into the company Pillpack. This online pharmacy sorts medications into packets stamped with the date and time they are to be taken. The packets are connected by tear off strips into one big roll that can be placed into a special dispenser. The patient easily tears off the package at the correct date and time. This can reduce missed doses and spilled pills.

Another problem with the current system used by most people is that all those assorted prescriptions often run out at different times. So someone taking five medicines might wind up making two, three, four or even five trips to the pharmacy every month. Pillpack resolves that hassle by obtaining short-term refills as needed to ensure that the patient’s prescriptions come due at the same time every month. Medications such as inhalers or test strips are mailed out at the same time as the monthly strips of packets.

I for one would hate to see local pharmacies go out of business. But the Pillpack model seems to have a lot going for it. The patient, as with a traditional pharmacy, is responsible for his or her copays. The Pillpack system makes it easy to refill and take multiple medicines. Their software can generate a reminder and alerts when a patient fails to refill a prescription, or adds a new drug that might interact with current medications. Patients can still call and speak to a pharmacist or pharmacy technician.  Their system also includes several mechanisms to verify that the correct medicines have been packaged to reduce pharmacy error.

As a physician, this system could be a real boon to older patients living alone who have trouble remembering their medicines, but have no close family or friends to monitor them.