For many of us, the most annoying aspects of watching TV are the commercials.

Many of them seem insulting to our intelligence.

Just when the ball game or the news program reaches a critical point, there is a time out for commercials. The commercials often seem designed to wake up the audience and the commercial sometimes has little to do with the product being advertised. 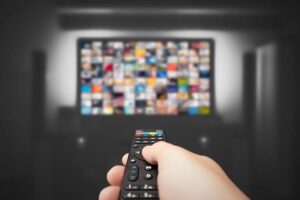 I won’t mention any specific commercials, for fear of being sued in our litigious society. Oftentimes, the commercial has some stupid scenario, many involving children, and then the product being advertised is mentioned briefly at the end.

TV commercials seem to be a nursery for child actors and actresses. Commercials come in clusters. Just when we are enjoying a TV program most, we are bombarded by a conglomerate of unrelated commercials.

We lose sight of any one commercial’s message, since our vision and minds are directed in so many different directions in a brief span of time.

The hodge-podge of entirely different commercials only serves to encourage people not to think seriously about anything for any length of time.

Sometimes, diseases are mentioned that I never even heard of, and I start wondering whether or not I have that disease.

To be fair, we could not have the TV programming that we have without support from commercial advertising. I love when a program is shown in its entirety, without interruption by commercials, but that is not frequent enough.

I don’t know the evidence for the effectiveness of any particular commercial, but I suspect that many do not cause the viewer to rush out to buy the product advertised. I’d like to see solid evidence that silly commercials are effective. If they are effective, what does this tell us about the maturity of the viewers?

Can anything be done to improve the situation?

I have some suggestions.

First, make sure that the designers of commercials have extensive training in psychology. Secondly, a commercial should be thoroughly tested on a targeted sample of individuals to assure its effectiveness. Third, commercials should be short and to the point. I don’t want to be startled by some irrelevant scene whose purpose I can’t figure out until the end.
Just tell it as it is.
Fourth, do commercials have to be so silly? Is the audience so immature that they can’t be talked to like adults? Fifth, the effectiveness of a commercial in selling the product should be thoroughly researched. Does the commercial really help sell the product? Sixth, do we need so many commercials? Perhaps TV can survive with fewer of them.

Maybe, my ignorance about the TV commercial industry is showing, but I’ll bet that many people grumble and groan when there is a commercial interruption to their favorite program.

Some commercial messages on TV do actually stick in your mind. When I was a teenager (many years ago), black-and-white TV was just making its debut. The TV set had a huge box and a tiny screen. My then girlfriend, Iris, had a wealthy family that could afford to buy a TV set. I recall sitting in front of the tiny TV screen, holding hands with Iris and watching the Milton Berle Show.

The commercial still rings in my mind, “We are the men of Texaco, we work from Maine to Mexico, there’s nothing like this Texaco of ours.”

Listening to the radio fixed other slogans in my mind. I’m sure that many readers recall, “Look, up in the sky. It’s a bird, it’s a plane, it’s Superman;” or “Who knows what evil lurks in the hearts of men. The Shadow knows;” or “From out of the west come the thundering hoofbeats of the great horse, Silver. The Lone Ranger rides again. Hi ho Silver, away;” or “Wheaties, the breakfast of champions.”

Maybe, modern TV commercials can accomplish the same long-term effect by providing a simple, meaningful slogan? Some commercials do this, and I think that makes them more effective.

Whenever I am driving my car, the slogan that comes into my mind when I‘m tempted to step on the gas is, “Speed kills.” That’s enough to slow me down.

Great things can be accomplished by brevity. Abraham Lincoln’s Gettysburg Address that set the stage for civil rights was only 267 words. The article by James Watson and Francis Crick in the journal Nature that described the structure of DNA, the genetic material, was only 953 words. The article that described the Hardy-Weinberg Law which is the foundation for population genetics was a one-page letter by Hardy to the editor of the journal Science. There are countless other examples demonstrating that length of presentation is not necessary for an important contribution to humanity. Why can’t TV commercials follow the same pattern and eliminate extraneous content?

I do not mean to insult anyone, but I believe this article may reflect the thinking of many TV viewers and I hope that the corporations that pay for commercials will take heed and try to make improvements in the future.