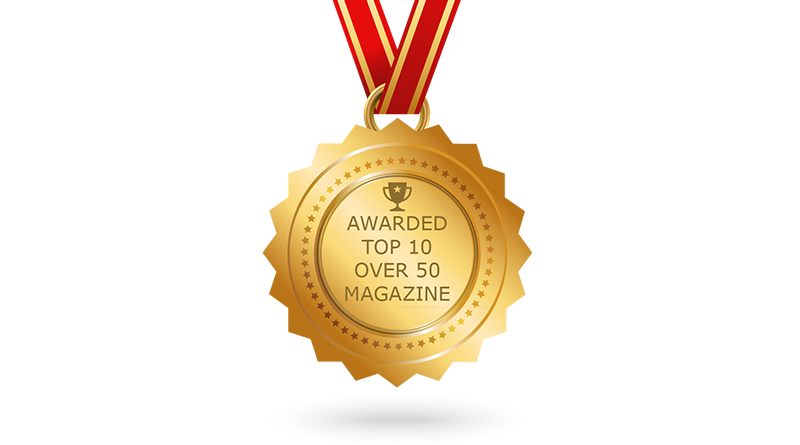 You hold in your hands (or on your screen) a top magazine. It’s not just the staff who think so. Anuj Agarwal, founder of Feedspot (www.feedspot.com) recently recognized 55 Plus as one of its Top 10 Over-50 Magazines.

Agarwal said that his editorial team selected the best Over-50 Magazines on the web and ranked them based on several factors such as content quality, average number of shares on social sites and website traffic.

“I personally give you a high-five and want to thank you for your contribution to this world,” stated Agarwal in an email message. “This is the most comprehensive list of Top 10 Over-50 Magazines on the internet and I’m honored to have you as part of this!”

“It’s always great to receive this type of recognition,” said Wagner Dotto, editor and publisher of 55 Plus. “Our team of writers, salespeople and designers work very hard to produce an interesting, informative publication.

“I was very excited when I read the email from Feedspot with the news we had been selected as one of the top magazines for Top 10 Over-50 Magazines on the web. It’s pretty cool.”

Dotto began publishing 55 Plus in 2005 as a quarterly periodical, all in black and white. After a few issues, it became and has remained bimonthly. The magazine also went color on all glossy stock.

“The commitment to produce a publication that’s interesting and relevant has remained,” he said.

About 70,000 people read each print issue, in addition to several thousand online. The print issue is available at grocery stores such as Wegmans, Price Chopper and Tops locations and in many high traffic venues throughout the region.

The online edition, also launched in 2005 and revamped in 2017, has grown in readership as the convenience of electronic reading has made this format attractive.

“We have had more than 6,000 unique visits to the site,” Dotto said.“The number of unique visits is growing  recently, especially after we revamped the site, which can be viewed at cny55.com.”

Despite the growth in technology use, there’s still plenty of appeal in the spontaneity of grabbing the latest glossy issue from the rack. Dotto strives to place eye-catching photos and intriguing headlines on each cover.

“This is a unique publication,” Dotto said. “There is no other magazine for active adults in Central New York. Besides, this group of the population — baby boomers — is growing very rapidly. It’s the fastest growing part of the CNY population.”

He thinks that the original and hyper-local aspect of the magazine has helped it achieve success in developing a strong readership.

“No one else is addressing the topics and the people we feature in the magazine,” Dotto said.

Instead of fleshing it out with stories seen elsewhere, such as Associated Press stories, for example, 55 Plus’ stories feature local interviews, local writers and local issues.

As for 2019, Dotto said he hopes to “maintain and improve the quality of the publication.”

The complete list of Top 10 Over -50 Magazines is available at https://blog.feedspot.com/over_50_magazines.