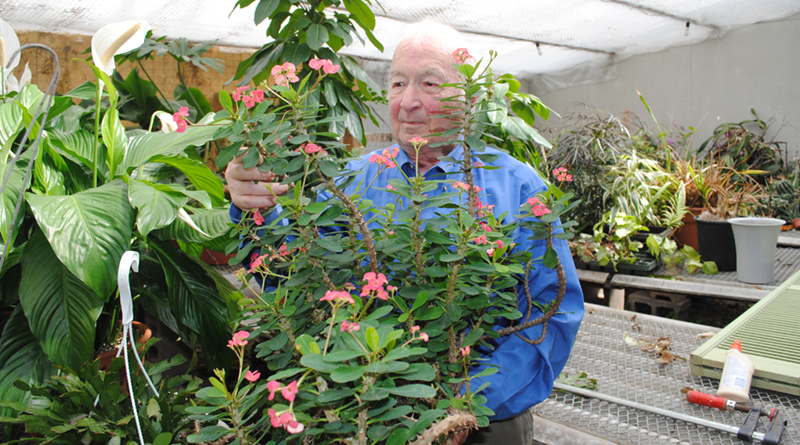 Carmen Cosentino has literally grown up in the floral business.

Over the decades, he has taken the family’s flower shop, Cosentino’s Florist in Auburn, and made it blossom even more, achieving both national and international fame.

“I’ve been working here since age 2, I think,” he said with a chuckle.

His work has taken him all over the world, lecturing and conducting seminars for other florists. He has been honored with numerous awards from colleagues in the industry, and he has served on the teams that handled the floral arrangements for four presidential inaugurations.

His parents, Carmine and Phyllis, had opened the shop at 141 Dunning Ave. one year before Carmen was born.

They also owned the house next door. It’s the same house that Cosentino, who turns 87 in June, grew up in with his two younger brothers, Robert and Ronald; the same house where he and his wife, Anne Marie, raised their family, and the same house he still lives in today.

The couple has four children, Guy, Russell, Julie Anne, and Jessica. Julie Anne died in 1981 at the age of 11 of brain cancer.

Jessica works side-by-side with her dad, preparing to take the family shop into the next generation.

Cosentino always knew he wanted to be a florist. However, before he entered the business world, his mother was adamant about having her children become college-educated.

He went to college at Cornell University, majoring in horticulture with a minor in agriculture journalism.

Upon graduation, most florists were working long hours, competing for business and replicating one another, he said.

Shortly after he and Anne Marie married in 1962, his mother sold them the business.

“In the early ‘60s, we remodeled the store, and it caught the eye of the FTD [Florists’ Transworld Delivery] rep in this area,” he recalled.

So much so, that the FTD magazine at that time did a story about the shop. His association with FTD would set him on a course that would alter his career.

He was hired to do seminars for the floral company and did that for about a decade. In the mid-1980s, his associate at FTD had moved over to Teleflora and offered him a job conducting similar programs.

He would go on to do about 300 seminars over the next 10 years, meeting other florists and traveling extensively.

Although he was the teacher at the seminars, he picked up many ideas from others in the industry.

“A teacher always learns,” he said.

And what he learned enabled him and the business to adapt to and keep current with changes in the floral business.

Carmen Cosentino’s experience has earned him invitations to help with the floral arrangements for the inauguration of George H.W. Bush, one for Bill Clinton and two for George W. Bush.

“I came up with ideas constantly that we could talk over. My wife was very, very good at going along with suggestions, as is this one,” he said, with a nod to daughter Jessica, who has been running the shop with her father for about 10 years. Anne Marie died seven years ago.

Originally, the family had started the business as a garden center, with two-thirds of an acre of greenhouse space, and they grew a lot of their own flowers and bedding plants.

Over time, he explained, they have transformed and are handling more and more cut flowers; expanded the inventory to include small gift items, plush animals, balloons, and fudge, which is made at the shop’s kitchen; and several years ago, at Jessica’s urging, they renovated to include a wedding room, where they can meet with brides and plan arrangements and bouquets.

His experience also earned him and his wife invitations to help with the floral arrangements for the inauguration of George H.W. Bush, one for Bill Clinton and two for George W. Bush.

The Society of American Florists teamed up with the presidential inaugural committees, and the Cosentinos were selected out of 100 floral businesses to do the work.

There is one florist selected who does the original designs, he explained, and the others follow his creation.

Not only did they have the honor of doing the flowers, but the Cosentinos were also invited to the White House for tea after the ceremonies, and they were able to meet the first ladies.

The Cosentinos have received numerous accolades from those in the industry.

In 1998, Cosentino was named to the Society of American Florists’ Floriculture Hall of Fame. Ten years later, he received the “Tommy Bright Honors” award for his work and dedication in educating florists in the United States and Canada.

The award is named for Ethel “Tommy” Bright, who, in the late 1930s, began what is now known as the American Floral Art School.

In 2016, the shop was named “Teleflora Company of the Year” and Cosentino received the Tom Butler Award, Florist of the Year.

Butler had been president of Teleflora and a long-time friend of Cosentino.

“To be honored amongst those peers is huge, especially when you’re a small business,” Jessica remarked.

In addition to his work at the shop and his travels, Cosentino has also been a writer, putting his college studies in agricultural journalism to work.  He began writing columns about the care and handling of flowers in Floral Management and Professional Floral Designer magazines.

For the past 10 years, he has been writing a column for the Auburn Citizen, titled “Flowers, Plants and Things,” on a wide array of topics, anywhere from how a flowerpot is made to how to cook cabbage.

Cosentino knows something about cooking. It’s one of his favorite hobbies, and he picked up a taste of some exotic dishes during his world travels.

“When he came home, we didn’t just eat Italian food. We hardly ever ate Italian. We ate Indian, Lebanese, and African foods. Curry was always in the household. For me, growing up, it was always very cultured,” his daughter noted.

Although he’s been a leader in the floral industry for years, Cosentino still sees himself as what he calls “an old-fashioned florist.”