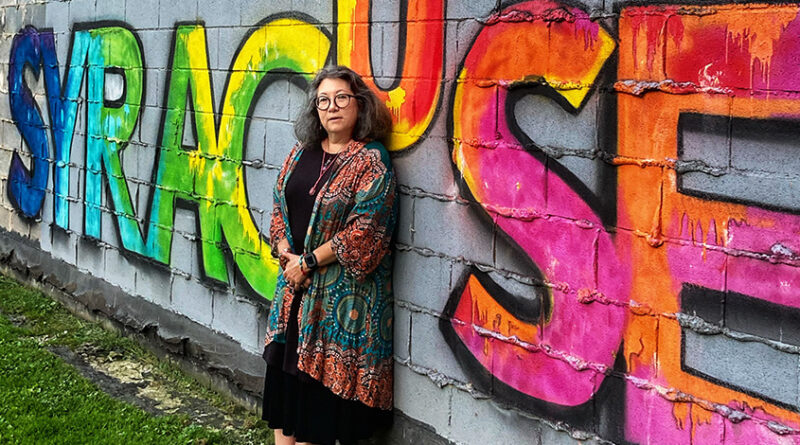 Author of ‘100 Things to Do in Syracuse Before You Die,’ discusses her unlikely journey through CNY and how the idea of writing a book about Syracuse came to be

Where else can you toast the nights of “Ni?” Baum around Oz-Stravaganza? Flock to the mall to view bald eagles. Or see green at an upside-down traffic light?

That place, of course, is Greater Syracuse. 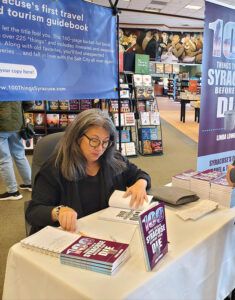 Local author and broadcast personality Linda Lowen testifies that the Salt City and its surrounding communities is the only place that gave her endless opportunities. Highlighting some of the most interesting features here is her way of giving back.

“Large enough to be interesting, small enough that there hasn’t been a tourist/travel guidebook for our city until now,” wrote Lowen. “Let’s get you acquainted.”

Lowen’s new book, “100 Things to Do in Syracuse Before You Die,” is available throughout the Central New York region at local bookstores. The 61-year-old author says this book is the closest she has come so far to a novel more than 40 years after her father promised her that if she attended college in these parts she would write professionally. She took some time recently to discuss her upbringing, her career, the events leading up to the book, and plans to include some day writing that novel as promised.

Lowen was born to a Jewish father and Japanese mother in Queens, New York City. That unique combination shaped her sharp sense of humor. The family moved around some, temporarily settling in Lewiston, near Niagara Falls, before Lowen attended college in the Finger Lakes area and later made her way to Syracuse. She loved reading and writing from the start, and by the age of 15 she was published in various publications, including 17 Magazine. It paid $25.

Lowen had her heart set on Brown University, but attended Wells College in Aurora on an academic scholarship. While completing her bachelor’s degree, Lowen moved to nearby Ithaca and got a job at WVBR radio station at Cornell University. She was soon promoted to the position of program director, which she only worked one day before senior managers determined that they must be staffed by matriculated Cornell students.

She produced commercials for the station and then took a position at the Q104 station in Ithaca, enjoying on-air opportunities. This is where Lowen developed her “syrupy” radio voice that she still jokes about decades later. She loved the station’s album-oriented rock format with the likes of Led Zeppelin and Rolling Stones. But when Q104 changed its format to easy listening (Sergio Mendes and Barbara Streisand), the only benefit to Lowen was that the seven-minute song, “True,” by Spandau Ballet, gave her enough time to run downstairs to the bathroom.

So back to Wells College Lowen went, this time to work as a public relations representative. The job was not so bad and Lowen spent two years there, but “I felt like I hadn’t grown up at all.”

By the time she was in her mid-20s, Lowen felt like she was too far removed from broadcasting and took a decent-paying job as the director of community relations at Tompkins Community Hospital in Ithaca.

That job wasn’t what she thought it would be. Instead of writing press releases or pitching stories about the hospital, Lowen spent her time fielding complaints and interviewing doctors, nurses and patients to complete negligence investigations.

“Every day I would go into my car and cry,” she said.

So Lowen made her way to Syracuse and enrolled in a master’s degree program in visual and performing arts. It turned out that the program lacked the concentration in graphic design Lowen was looking for, and she didn’t want to take on more student loans, so she left SU without completing the degree.

This is where Lowen was on the brink of leaving Central New York forever. She never imagined penning something someday about how the region was so abounding in opportunities. She was working at Pier One Imports and was about to buy a one-way plane ticket to Hawaii. Then she met the guy upstairs, Jim, whom she initially referred to as “Mr. Green.” They became friends, dated, and were later married. In the book dedication, Lowen wrote: “For Mr. Green, who shows me every day why happily-ever-after isn’t Hawaii.”

Lowen landed a job in Syracuse as assistant communications director for the National Office of Literacy Volunteers, a cause near and dear to her as she recalled how volunteers had helped her mother develop English language skills. Lowen and Jim had two children (Joanna, now 27, and Mia, now 30). The balance between family and career went quite well for Lowen for a few years, but her world was temporarily turned upside down with an ovarian cancer diagnosis at the age of 33.

During her treatment Lowen took a great interest in women’s health and women’s issues. She met a like-minded individual in Lorraine Rapp, who worked for 95X radio station. A local National Public Radio affiliate was interested in their perspectives and, in 1996, the weekly live “Women’s Voices,” show premiered.

It took off quickly. The duo had no problem lining up big name guests, including Hillary Clinton. Even though they did the show on an unpaid volunteer basis, they continued to grow their audience and hoped for eventual syndication. Lowen and Rapp won a Syracuse Press Club award and found their work on the show deeply gratifying, but they ended the radio program in order to do a paid television show with Time Warner Cable’s channel 13. The TV show was also a success, but it was discontinued after one year along with all other local programs on the station when News10 Now set up shop in Central New York in 2003.

“Looking back,” Lowen recalled, “the whole experience was insane—in a good way. Sure, we didn’t get paid for the radio show, but we also didn’t have to pay for the airtime. When the [television] show ended, we didn’t come close to running out of ideas. For one episode we tried to do fly fishing. We looked like idiots, but it was a lot of fun. Only in Syracuse would you get these kinds of opportunities.”

Lowen later got a job with the Syracuse PBS television affiliate, WCNY. The station offered her a one-hour live weekly shot. Lowen had done live radio, but the show she did for Time Warner was always pre-recorded. She was terrified and lost 10 pounds during her first week on the job worried that she’d be a flop. But she proved to be up to the challenge.

“You had to learn not to get distracted if there was a humming sound in the background, or if a ceiling light went out. I had to improvise and stay focused on the goal: To take everyday Central New Yorkers and put them in the seat next to you. You can never forget that small-town feel.”

Lowen eventually returned to her first love: writing. Decades after getting that first check from 17 Magazine, she was getting published again nationally. She produced about 2,500 pieces of original content about women’s issues for About.com. If it happened to a woman, she wrote about it. Then Lowen took another long break from writing again to do another show with Rapp, this time for the WRVO NPR affiliate. The “Take Care” show ran for five years.

Between the back and forth between publications and broadcasting, Lowen set her sights on a simultaneous second career: teaching. She got involved with the Downtown Writers Club at the age of 50. Her initial interest in the organization was to get some direction for finally writing that novel, but instead she found opportunities to share her knowledge of writing nonfiction with others. At the age of 56 she started teaching “micro memoirs,” where participants are challenged to write their life stories in 200 words or less. Moreover, writers were encouraged to write about the most difficult moments in their life. Lowen led by example, of course, and her piece “Letting Go of Signs,” appeared in the New York Times Sunday Styles section in June 2019.

Lowen’s ability to write so tight and bright prompted a call from Reedy Press. The publisher had already published more than 100 books about the hot spots in different cities. They wanted a book that was witty and colorful, and not something with too much fluff or padding that looked like it was written by a visitor’s bureau or a tourism office. Lowen took to the task as if she was working on her Ph.D.

Larry West, who was Lowen’s editor at About.com, said Reedy Press found the best person possible to write this type of book. He described her ability to connect with readers as remarkable.

Reedy gave Lowen the creative freedom to pick the places and apply her own writing style, but the publisher still required the entries to be categorized — food and drink, sports and recreation, music and entertainment, culture and history, and shopping and fashion.

“If I have to have a first book at age 61,” Lowen said, “this is really nice, because people want to read it.”

When she is not writing, Lowen enjoys walking and fitness. Before COVID-19, she used to vacation in Myrtle Beach, South Carolina, renting a big house where she hosted workshops for her writing friends. The trips were halted due to COVID-19, but Lowen took advantage of the down time, worked out harder, explored new diets and lost 70 pounds. She looks forward to walking pain free on the beach again with her dogs.

Lowen cut out sugar and alcohol. She is not big on fruit, but eats tons of vegetables.

Lowen and her husband live in Jamesville. Although they enjoy trips to southern beaches, they have no plans to leave Central New York.

She is brainstorming a few short pieces about Central New York, but still can’t get away from the idea of someday publishing fiction. Lowen loves the idea of writing the story type of her choice, but she can’t promise that it won’t be about Syracuse. Meanwhile, she challenges others to get out and explore what the area has to offer.

“This is a place where people are willing to trust each other,” Lowen said. “Get out of ruts. Walk to a new park. Watch a sports team you haven’t seen before. Try a new restaurant. The hope is that everyone in Central New York is going to cross each other’s path.”

Linda Lowen’s book “100 Things to Do in Syracuse Before You Die” has been so well-received that the publisher quickly gave her a contract for a second one: “Secret Syracuse: A Guide to the Weird, Wonderful and Obscure.”

And this time, the entire Central New York Community can get involved. Lowen is collecting ideas and story submissions. They can be sent to
SecretSyracuseBook.com. Once she selects ideas or submissions, Lowen would interview the contributor and then verify the events through the Onondaga Historical Association’s collections of records or newspapers. Her manuscript is due March 1, 2023. A fall 2023 release date is planned.

“[55-Plus] readers are the target audience,” Lowen said.