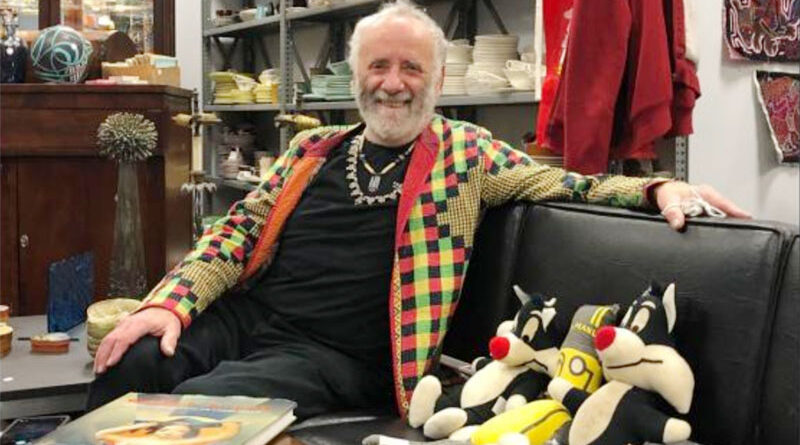 Bruce Block ran Antique Underground from 1986 until it closed in 2002. In November, he re-opened the store in a new downtown Syracuse location

Everything old is new again for Bruce Block — and for his business, Antique Underground.

If you’ve lived in Central New York for a while and you appreciate antiques, it’s like the return of an old friend: Block owned and operated the original Antique Underground, in the sprawling basement of the historic Hogan Block Building in Syracuse’s Armory Square, from 1986 to 2002. He closed it to pursue other passions.

He opened the new Antique Underground in November. It’s not underground, but instead occupies a multi-room space on the ground floor at 124 E. Jefferson St., in downtown Syracuse. It’s a co-op, in a sense: Block leases space to about seven other dealers. “But you know me,’’ he says with a smile. “I’m still the boss.’’

Starting a business at any time is challenging, let alone during a pandemic. But for Block, 75, it made sense. The coronavirus put the brakes on any travel plans for 2020 and he was getting restless at home. He also had a stash of antiques — plus jewelry and other wares he has collected in his travels.

He considers the store an extension of City Market, the seasonal outdoor arts, crafts, vintage and antiques marketplace he launched in Syracuse in 2014.

On a recent weekday, Block tended to business matters from a long black mid-century modern sofa and chair set at the front of the store, fielded phone calls (“Do you still buy diamonds?”) and moved about the place, tidying up and rearranging displays. A young man came in to inquire if Block had any silver (“Do I have silver! I have tons of it!’’) and Block proceeded to show him a case full of silver statement pieces from around the world.

The store’s emphasis is on mid-century modern furniture, furnishings and décor — which remains very popular at this time — but there’s also furniture that dates to the 1800s. You’ll also find Pyrex, pottery, china, glassware, linens and vintage clothing, as well as paintings by local artists, colorful textiles and clothing from Block’s travels, pottery from some of Block’s favorite contemporary pottery makers and hand-crafted wood and industrial-style furniture made by local artisans.

“Mid-century modern is really important now, especially with furniture,’’ Block says. “But we have things from many eras, really.’’

Block grew up in New York City, studied theater at City College of New York and remembers when it cost $77 a month to rent a five-room apartment in the city with friends. His work life has included stints as a ballet dancer (though he found he liked folk dance and the freedom of modern dance better), social worker and teacher.

One summer, Block recalls, he came to the Skaneateles area to work with a friend who had an antiques business. He liked the customer-focused and ever-changing nature of the business enough to want his own piece of it. “It just kind of snowballed from there,’’ he says. He opened Antique Underground, which became a retail anchor of Armory Square.

This past fall, he looked at a couple spaces in Armory Square before calling his old landlord, developer Bob Doucette, and asking him what spaces he might have available.

“I was surprised that Bruce was going to open his retail store once again and totally delighted,’’ Doucette said via email. “I loved the Antique Underground when it was in the Hogan Block. It was such an interesting store and drew tons of visitors from the region and beyond.

“Bruce was one of the people that made Armory Square unique and a fun place,’’ Doucette adds.  “I love the fact that he’s back and I hope he inspires other retail entrepreneurs to bring their ideas to life. Retail has been hit hard lately but it’s one of the activities that makes a city a city.’’

Over the years he didn’t have a brick-and-mortar business, Block taught adult education courses on antiques for Syracuse University and escorted groups to antiques shows and sales in New York, Pennsylvania and Virginia. He eventually took his clients up on their suggestion to offer small group tours to exotic places. “We know you travel elsewhere in the world, why don’t you take us?” one of them said.

Block has traveled to Thailand, Morocco, Zimbabwe, Afghanistan, Tibet, South Africa, Spain, France, Argentina and many other places. He lives in a Spanish-style house on the east side of Syracuse with his partner, Patrick Dwyer. He looks forward to getting a vaccine for COVID-19 and plans to lead small group adventures to Vietnam and Cambodia in 2022.

“The nature of what I can do has changed because of the pandemic,’’ Block says. “It’s not always going to be like this.’’