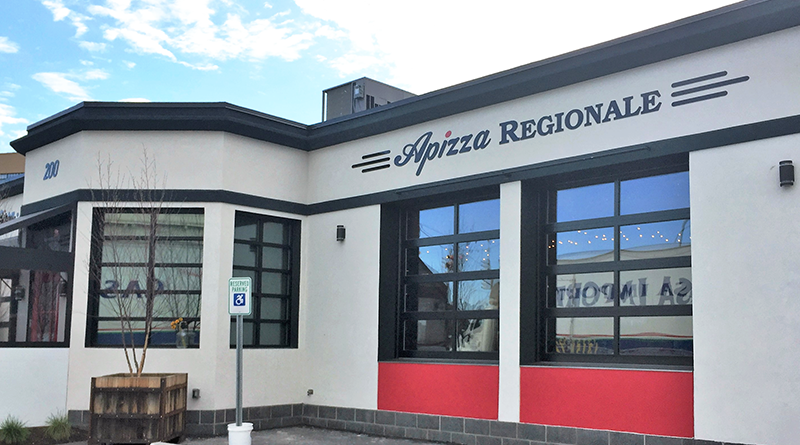 The specialty is wood-fired pizza —all made with local ingredients

To open an Italian restaurant in a city where old-school red sauce joints are held in reverence is a daunting task.

But in 1988, the idea of opening a barbecue restaurant in an area where at the time, people’s idea of barbecue started with slathering grilled meat with thick, syrupy sauce and ended with disappointment and confusion, was also a daunting task.

But it worked out for John Stage and company and their latest venture, Apizza Regionale, should work out just fine too.

Stage, the brain behind Dinosaur Bar-B-Que, and Paul Messina, former bar manager at Dinosaur, opened the Neapolitan pizza joint — across the street from Dinosaur — in March.

The dark wood walls and honky-tonk vibe across the street are absent at Apizza Regionale, replaced with bright windows, exposed brick walls and a large terrace open during the warmer months.

There’s no pulled pork pizza, beef brisket bruschetta or any other Italian barbecue hybrids on the menu at Apizza Regionale. The only thing Stage and Messina brought with them from across the street was decades of experience and the knowledge that everything tastes better when cooked with wood.

The restaurant was mostly full when we arrived for dinner around 6:30 p.m. on a recent Wednesday evening, but we were able to immediately snag a table. Of course, the best seat in the house is at the counter overlooking the open kitchen and wood-fired oven. The chef’s table, if you will.

The bare-bulb lights, brick walls and large windows that retract like a garage door create a distinct industrial vibe. The bar, which was full and vibrant despite an early hour on a weekday, is finished with period metal details for a modern feel.

Dinner started with an order of wood-roasted Brussels sprouts ($9). Two diners at an adjacent table started their meal the same way, presumably drawn in by the house-made pancetta, toasted hazelnuts and zippy vinaigrette that caught our eyes. In between bites of Brussels sprout — deeply browned but still firm — we heard one of our fellow diners mention to the other that she was a vegetarian and did not know what pancetta was. I watched in horror as the waiter took away the plate, still filled with porky goodness.

The bulk of the entrées at Apizza Regionale are — you guessed it — pizza, but they do offer a couple pasta specials each day. We opted for their take on the classic pasta con le sarde ($14), or pasta with sardines.

The bowl of radiatori pasta was perfectly al dente; cooked so that each piece of pasta can stand on its own. The dish has both anchovies and sardines and the fish flavor is deep, but not overpowering. The sweetness of the soft golden raisins, crunch of the toasted almonds and breadcrumbs and the acidic punch from the white wine and capers provided the right contrasting textures and complementary flavors to create a delightful dish.

Apizza Regionale has eight pizzas on the menu. Four have a tomato sauce base, while the other half are “white pizzas,” topped with anything from wood-roasted cauliflower to shaved asparagus and Brussels sprouts.

We went for The Calabrian ($15), topped with tomato sauce, soppressata, house-made mozzarella, caciocavallo cheese, fresh oregano, Calabrian chili and a drizzle of honey.

The crust, made from flour milled in Trumansburg and fermented for 48 hours, was perfectly chewy, but still thin and not too airy. The raw honey, sourced from Angry Bee Acres in Hannibal, along with the oregano, provided a bright floral flavor, a great pairing with the salty, rich soppressata and funky caciocavallo.

Many of the other ingredients are sourced locally, a feat they’re proud to boast on a chalkboard map of New York hanging on a wall, labeled with each provider. Among the many Upstate New York products include Café Kubal coffee and Gianelli sausage from Syracuse, the soft Lorenzo cheese from Meadowood Farms in Cazenovia, the gin for the negronis from Prohibition Distillery in Sullivan County and the pork comes from Lucki 7 farms in Jefferson County.

Even the wood used to fuel the oven comes from Baldwinsville.

A sign of a pig, with a diagram showing the different types of charcuterie made from each part of the animal, hung on the wall near the wood oven. Underneath the diagram are the words “in lode del maiale,” or “in praise of the pig.”

John Stage has been praising pork for nearly 30 years. Why should he stop now?