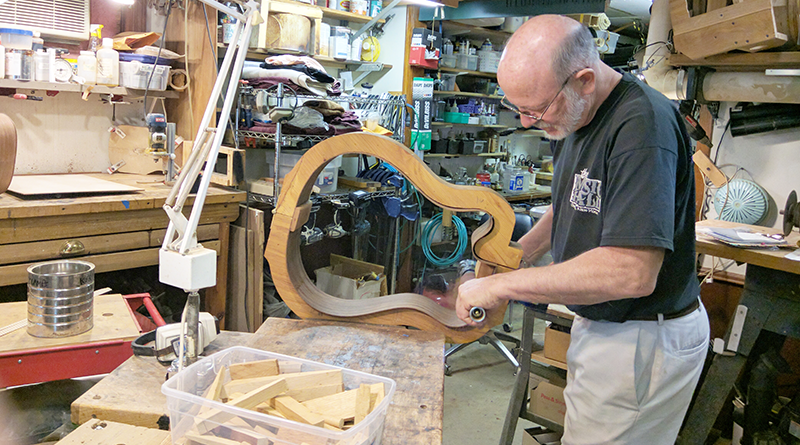 To say that Oswegonian Mark Wahl has a passion for stringed instruments would be an understatement.
Wahl is a singer-songwriter, guitarist and luthier. He has been around the local acoustic scene for decades and is known by many as the president of the Ontario Center for Performing Arts.

Wahl is a graduate of SUNY Oswego and spent his career as a general contractor where he built houses, designed, and was hired to oversee light commercial and residential work.

Wahl had the opportunity to work in a lutherie shop while he was still in contracting. Since then, Wahl has directed his energy into his music, the Oswego Music Hall, and his home lutherie workshop. Wahl hand makes guitars, and repairs and restores acoustic instruments. Wahl describes his business as more of an art than a hobby.

An artist is just what Wahl is. His second degree from SUNY Oswego was in stage design and lighting. He plays on a semi-regular basis, and in 2013 released a CD entitled “Everything Returns” with his trio Canvas Moon.

Wahl plays and sings original songs and uses his baritone ukulele as a composing instrument. He describes his own sound as Americana, a cross between folk and indie. “I find things worth singing about, and write vignettes, thematic stuff,” said Wahl. “I have a sound, it’s punchy.”

“I’ve been writing songs and playing the guitar since I was a squirt,” said Wahl. His mother was a classic pianist — he remembers camping out and listening to tremendous music. Wahl took guitar lessons as a kid, but claims he wasn’t much of a student. “I was undisciplined,” he said.

Wahl built his first guitar in high school. With years of experimentation, he now makes a top- end instrument that he says performs against the top players — the Taylors, Martins and Gibsons.

“I don’t build anything I don’t design myself,” said Wahl. “That’s not to say I don’t like to see what is out there. I enjoy a fine guitar no matter where it comes from.”

Wahl has a half-dozen of his own designs. He uses computer-assisted design technology to draft a design, which he says to a fine degree eliminates surprises and gives consistency. Wahl understands the types of wood, whether exotic or sustainable, and can therefore predict what an instrument he’s working on will sound like. “The hardest thing to hit is great tone,” he said.

A lot goes into making a custom guitar. Wahl tries to build his guitars to suit the player. He involves the customer in the process, and they discuss tone and aesthetic components. “Because I write music and I play, I have a connection with a guitar, and insight from that helps a great deal,” said Wahl.

Wahl’s custom guitars sell themselves. “People will ask, ‘What brand is that?’” said Wahl. He doesn’t seek orders, noting he isn’t fast enough for that. However, he works on several guitars in his shop at once. Wahl has a waiting list about a year out. He also makes smaller-bodied, parlor guitars, which Wahl says are popular right now.

He is also in high demand for repairing acoustic instruments. “Once people know you make guitars, they want you to fix them,” Wahl quipped. He doesn’t mind though — Wahl enjoys solving problems and talking music around his workbench. He particularly looks forward to revisiting and servicing guitars he’s made.

“Some interesting people play my guitars,” Wahl said. “When you have your own custom guitar, you take ownership. The people who buy my guitars are inseparable with theirs.”

“No one makes it big from making guitars. To me, it ties me to the music world; it’s about supporting artists,” said Wahl.

As director of the Oswego Music Hall, Wahl goes to area festivals to seek out talent for its stage. The Music Hall has 17 national level performances and 40 events per season, which runs from September to June.

The Music Hall gives Wahl an opportunity to give back and it anchors him to his community. “Everywhere in our community there are musicians,” said Wahl.