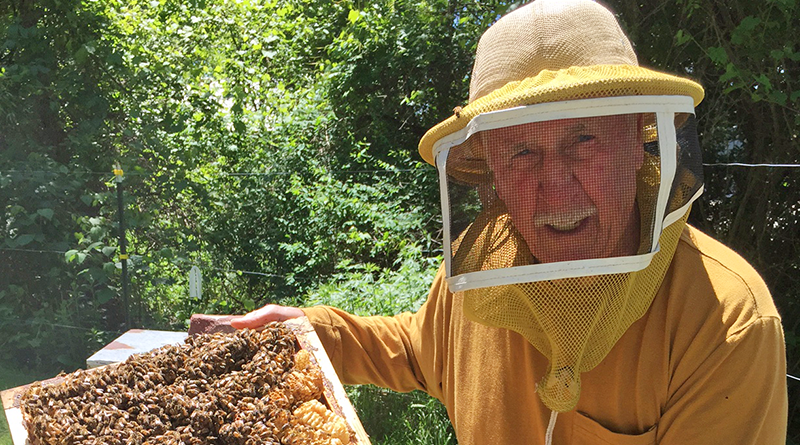 At 84, Jim Howard nurtures a honey of a hobby

We don’t do it unless it’s fun!That’s the motto of Jim Howard, owner of Hives of Howard in Oswego.

“I came from nowhere to somewhere, really,” said Howard, noting “good mentors” have offered encouragement along the way.

A former high school and college wrestling coach, Howard finished his last 10 years at SUNY Oswego as the director of conferences. Now at 84, he continues his legacy as the multifaceted proprietor and manager of Hives of Howard.

Beginning with two back yard hives, his grassroots organization has reached the heights of a 30-hive empire, procuring at peak up to 200 pounds of locally produced honey per hive.

Whether genetic or modeled through the generations, this octogenarian wrestling coach turned beekeeper seems to drink from the fountain of youth, waking each day with vim and vigor. When not totally immersed in his bees, mentoring, teaching or advising, Howard may be found golfing, riding his mountain bike or with a gun or bow in hand during hunting season.

“I think that’s why my higher power keeps me alive at 84,” Howard says, “because I’m active, very active.”

With that, it should come as no surprise that his wife Barbara would be equipped with the same zeal found in her spouse. Armed with knowledge gleaned from her sister-in-law’s four California beehives, Barbara returned home from a short visit once and was determined to start her own bee colony.

Like any startup, the learning curve can pack a wallop or in this particular case, sting like heck, 50 stings to be precise.

“One day, I lost a hive over the winter to whatever reasons,” Howard recalls. “Before we could buy new bees and get them in, what they call a feral hive took up residence.”

Feral bees are aggressive, and Howard could not mow the lawn or till the garden without being under threat of attack. ”They’d go right after the tiller!” he exclaimed.

Honeybees, in contrast, are traditionally passive and docile in nature. “You can walk right through them. They’re just happy that the sun is out and there’s no clouds in the sky,” Howard said.

He decided the best plan was to let the aggressive hive thrive and start a new one in the spring.

“I’m down on the lawn one day and here Barbara comes. She’s got all her bee garb on, smoker in hand, and I said, ‘Don’t do it, Barbara, don’t go near the damn hive!’ Well, she didn’t listen to the old coach, and in she went.”

Barbara was stung at least 50 times, rushed to the hospital for a shot of adrenaline and as the old coach mused, “We weren’t living happily ever after for a while.”

Lesson learned, the hive was eventually destroyed and order restored. 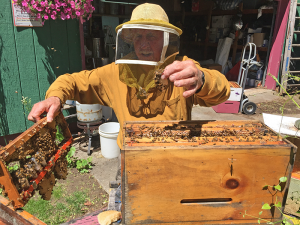 “So that’s how it started,” Howard said. “We went from one or two hives, with the grandchildren helping me, to 30 and then the kids all left. I’m left with 30 hives to take care of.”

Grandkids, as they do, grew up, went to work, got married or went to college. “They went on with their lives,” Howard said.

Meanwhile, the entomology program at SUNY Oswego, which focuses on the scientific study of insects, was a blessing for Howard. The program afforded him the opportunity to once again share his wealth of knowledge and tap into his love of teaching.

“The college kids come to my apiary and we spend an afternoon in the Hives of Howard,” he said.

He was back teaching and he loved it. “That’s what life is all about, in my opinion, the people you touch along the way,” he added.

Transitioning from a masterful wrestling coach to master beekeeper took effort and time. Now as an authority in the business of bees, Howard said, “There’s probably 101 ways to keep honey bees and all of them are correct. I’m just one of the many that does it my way.”

Honeybees are needed for the pollination of a plethora of fruits and vegetables. Although wind and other insects have the capacity to pollinate, Howard says these methods aren’t as thorough as the honeybee. 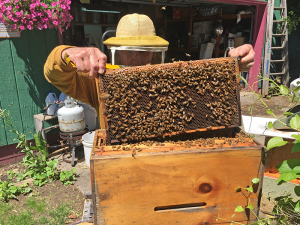 A great example is the Bartlett pear. These pears must be pollinated near the trunk of the tree. The only insect that will go inside and pollinate by — you guessed it — bees or other insects..

“You can’t raise pumpkins without bees,” Howard said. “Only bees will pollinate that flower.”

Almonds, pumpkins, blueberries and the like all rely on the honeybee. “Every single one of the pumpkin growers on the east end of Oswego County have beehives,” Howard noted.

However, honeybees in recent years have met their challenges, whether caused by climate fluctuations, parasites like Varroa mites, disease or the most recent predator in this area, the black bear.

Having little defense against bears, the bees ultimately swarm, abandon the hive and take their queen with them. “I had a black bear and her 80-pound cub wipe me out. Probably $2,000 worth of honey and equipment,” Howard said.

As a consequence, Howard and his crew spend most of their spring consolidating hives and erecting electric fencing, both costly and time consuming.

“There’s a madness for my meanness,” Howard said. “I’m directing myself to do certain things to help honeybees live longer.”

Facing his own challenges, Howard had open-heart surgery in July of 2016.

“OK, so they did a good job. I’m living happily ever after and having fun along the way,” he said.

It seems, however, being the honey man has unforeseen advantages. Had he not bribed the entire medical-surgical team with a two-pound jar of honey, “I probably would not be here today!” he said.

Editor’s Note: For more information about Hives of Howard or if you would like to start your own apiary, email Howard at jhoward1@aol.com.