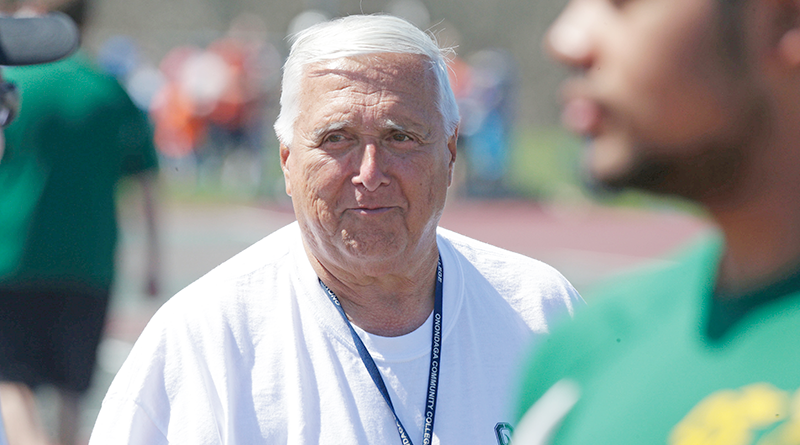 The walls in his office on the Onondaga Community College campus are covered with trophies, plaques and mementos from floor to ceiling — awards the OCC Men’s Tennis Coach John LaRose has garnered over the past few decades.

His favorite hangs over his desk — a framed jersey signed by members of his 2008 OCC tennis team that brought home a National Junior College Athletic Association (NJCAA) National Tennis Tournament Championship — the only one the college has won.

Coach LaRose has revived the tennis program at OCC over the 20-plus years he has been there, and last spring he celebrated his 500th career win, as his team beat SUNY Adirondack, 8 to 1.

LaRose has been named NJCAA National Coach of the Year, and in the past was honored as the NJCAA Region III Coach of the Year Award four consecutive years. He has been inducted into the National Tennis Coaches Hall of Fame, and during his tenure as teacher and coach at Onondaga Central School, his teams won 10 league champions.

Coach LaRose estimates about 1,500 to 2,000 adults and juniors go through the camps, clinics, leagues, tournaments and lessons he, his coaches, and team members organize every year.

Not bad for a guy who had never played tennis prior to becoming a coach.

But his accomplishments are not just wins and losses and the number of awards hanging on the walls. The success is all borne out of his passion for teaching and for his students.

“I love teaching. I love working with kids. I think God just put me here to teach and coach,” he said.

During his 30-plus-year career with the Onondaga Central School district, he taught elementary school, middle school and high school. In his last few years with the district, he was also chairman of the science department, supervisor of science for grades K-12, and he spent 20 years overseeing the high school’s drama department.

“Anything that the kids needed, I was there for them,” he said. “I had classes on Saturdays for kids that couldn’t get their work done during the week.”

And then one day, while teaching at the Wheeler Middle School in the OCS district, he learned that the high school kids needed a tennis coach. The former coach had quit, and the school board was planning to drop the tennis program. The team members, many of them seniors, were devastated. So, he said, the kids banded together and talked him into coaching them for the rest of the season.

LaRose told the students he’d never played before. “I don’t know anything about the sport, but if you’re looking for a teacher to be a supervisor, to be with you at practice because it’s required, and to go with you on bus trips for matches, I will help you out. That’s basically how I started that first year.”

LaRose found he really liked the sport. And although he was inexperienced as a coach, he believed his teaching skills could transfer from the classroom to the court. One of the junior students on the team, he said, would go out after practice and would help him.

“HE was feeding balls to ME,” he joked.

That following summer, Coach LaRose became a student himself, taking lessons to not only learn the game, but to study coaching technique, and followed by an intensive one-week tennis camp at Amherst College.

Then the kids needed a teacher to help them with the senior play. Because he had some experience in theater, the school administration approached him to help with the senior play. In true LaRose style, he not only directed that play, but got into it so much, he said, that he would go on to do the annual variety show for years. Because the shows were also in January, he also helped the students to build sets during Christmas vacations.

One of his favorite shows, he said, was when he got the senior athletes — both girls and boys — into outrageous costumes and had them dance to Cyndi Lauper’s “Girls Just Want to Have Fun.” Some of his female students have since told him, that every time they hear that song now, they think of LaRose, he said, laughing.

His final production at OCS was the musical, “Fame.” He was also coaching tennis at OCC at the time, and one of his tennis students had danced ballet in San Francisco. He asked her if she would be interested in helping him out on the show, she readily agreed, and she helped to choreograph a lot of the scenes for the production.

For some time, his work with the theater program overlapped with his OCC coaching job, and he would shuttle between the OCS rehearsals and the OCC tennis courts.

Some of his former students have gone on to find success on larger stages. One student who has distinguished herself is Dena Tyler. LaRose had her in science and in his theater productions. She graduated from high school and went on to study neuroscience. After becoming a neurologist, she returned to Central New York from New York City for a visit and stopped in to see LaRose.

Whether on the stage or on the tennis court, LaRose has made a significant impression on his students and his colleagues, according to several sources.

“His many years of classroom teaching experience are clear when you watch him on the tennis court and working with his students in his office. He has the ability to connect with students to teach them tennis and life skills and help and push them to improve,” said Michael Borsz, OCC athletic director. “His biggest and best trait, though, is his ability to care for each student he interacts with. He has truly made a difference in students’ lives. He is a master teacher and coach.”

Always an educator, LaRose spends time coaching students not only in the game of tennis but in their studies as well, encouraging them and tutoring them when needed. If a student is not eligible academically, he or she cannot play, LaRose said. He proudly pointed out that the men’s tennis team had the highest GPA last semester compared to other teams at OCC.

One of his current students, Eric Day, just finished his freshman year playing for LaRose.

“He was always on my case,” Day said, referring to his academic performance. “I did well my first semester,” Day said, “and he wanted to make sure I continued.”

Day is helping LaRose with OCC’s College of Kids summer tennis camp, and enjoys relaying what he’s learned from his coach onto the younger kids.

A former player who currently helps LaRose with his camp is Brandon Fernandes, who has known the coach for years.

While the players have to keep up on their grades in order to play, it’s important to LaRose that they do well for their own good, Fernandes said. “It’s good to know that there are people out there who want to see others do well. He has such a big heart,” he said.