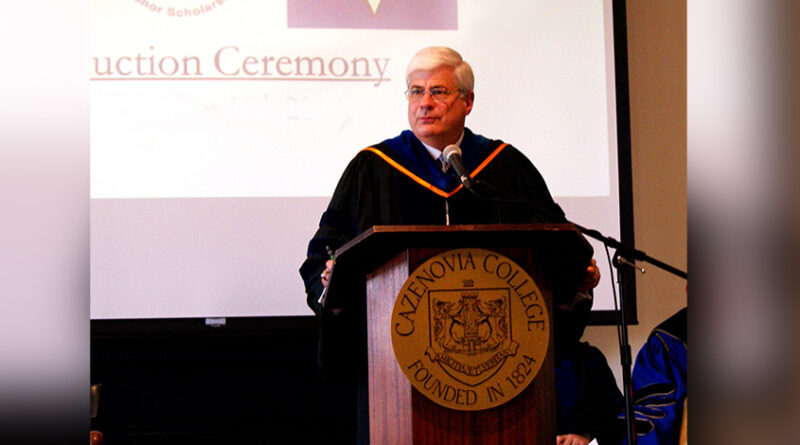 Longest-serving faculty member at Cazenovia College writes about the presidency of George W. Bush, reflects on 40-plus years teaching at Cazenovia

In the four decades that followed, Cazenovia College expanded from a women’s junior college to a four-year coeducational institution. Academic programs were added, new facilities were built and the school was attracting students from across the country. The black boards made way for the white boards, which later made way for power point presentations and online learning.

And yet, professor Bob Greene, who was named the college’s first endowed program chairman 21 years after he answered that ad for a radio station adviser, never wavered in his approach to teaching.

“Teaching has not changed at all,” Greene, 67, said in a recent interview. “It’s a human being that knows things that the audience doesn’t know. That hasn’t changed since Plato was standing under a tree and teaching.”

Greene loves writing as much as he does teaching. His 20th book, “The Presidency of George W. Bush,” was published recently. His previous books include works on Dwight D. Eisenhower, Richard Nixon, Gerald Ford and George H. Bush. He’s considered a scholar on the American presidency and is a sought-after subject matter expert on that topic. He has also been a regular panelist on WCNY TV’s “The Ivory Tower” political talk show for 17 years.

Since COVID-19, the Chittenango resident has taught remotely. He’s self-proclaimed “trapped at home” because of his vulnerability to the virus. While reflecting on his past, Greene noted he never strayed too far from home, anyway.

The Syracuse native grew up in the Valley neighborhood. He spent much of his free time at the Betts Branch Library on South Salina Street, reading each of the Hardy Boys books and as many autobiographies as he could get his hands on. He dreamed of writing for a living someday. Upon graduating from Christian Brothers Academy in 1973, Greene was ready to consider enrolling at LeMoyne College or Syracuse University like so many of his classmates, but he figured it couldn’t hurt to look at a smaller Catholic college in the rural corner of southwest New York.

“I made the decision on the scenery, or call it a gut feeling, but it really looked like something out of the Sound of Music,” Greene said of the Allegany countryside and the St. Bonaventure University campus.

He began as a history major and briefly considered a career in law before gravitating toward teaching. He got jobs subbing in Allegany County and in neighboring communities in northern Pennsylvania.

He enjoyed the classroom setting immediately, but eventually becoming disheartened with the curriculum and objective.

“What discouraged me was the regimen of having to teach to the [New York State Regents] exam,” he said. “That’s not what I thought it would be.”

Greene returned home to work on advanced degrees at Syracuse University, earning master’s and doctorate degrees. He was still a student there when he applied for the job at Cazenovia College 42 years ago. The radio station adviser job, much like the high school teaching job, was not what Greene imagined. But this time, he did not get discouraged and made the most of the creative freedom the undergraduate institution allowed him.

“I loved it,” Greene recalled of his early days on the small, scenic Madison County campus. “But I didn’t realize how much of a rookie I really was. With teaching, I’d say it takes five to seven years to learn the craft.”

Greene had to polish his public speaking skills in order to lead amateur disc jockeys and news readers by example. That hands-on experience in the station motivated him to design more effective classes. He went on to write books about public speaking and the college and its students benefited immensely from the synergy between the professor’s writing and teaching styles.

“Writing books became the groundwork for teaching an audience,” he said.

Greene has an affinity for teaching public speaking, a skill that is all too often underappreciated in this digital age. He said it’s a joy to watch a student’s confidence grow with a few pointers and plenty of practice: If your hands feel jittery, rest your finger tips on something before you begin talking. If your voice is shaky, drink a few sips of water. If you tend to talk too fast, record yourself and realize how silly it sounds, a sure corrective measure before your next live appearance.

“Every single person who speaks is nervous,” Greene said. “But the difference is, with the accomplished public speaker, you can’t see that they’re nervous.”

He also helps students develop critical thinking skills. He has no interest in teaching a course where the students just memorize the history or events or text book definitions.

“We want debates in the room,” he said. “What is your political ideology? You are teaching them how to think and they don’t know it. It’s less about substance and more about how that thinking process works.”

Greene was awarded his Ph.D. in American history from the Maxwell School of Citizenship and Public Affairs at Syracuse University in 1983. Cazenovia College hired him on full time a year later and in 1987 he received tenure. He was awarded the college’s distinguished faculty award five years after that.

In 2000, he was named the Paul C. Schupf Professor of History and Humanities. Today, Greene is the longest-serving faculty member at Cazenovia College, where he chairs the social and behavioral science division, serves as program director for the history program and co-directs the dual major program for history and social sciences.

And, he still he finds time to write. In addition to 20 books, Greene has penned more than 100 articles and more speeches than he cares to admit.

“I could teach, write, design courses; the college allowed me to do it all,” he said. “It’s the best of both worlds. I’ve always been very grateful for that.”

Greene’s favorite topic is the American presidency. He has always been intrigued by the amount of power our presidents had, yet, “most did not ever learn how to push the buttons of power to make life better for the citizens.”

In “The Presidency of George W. Bush,” Greene makes the argument that George W. Bush was not the complete failure that most academic historians contend. The ideas that Bush brought to the table, stem cell research, tax cuts, Middle East policy, “showed an awful lot of what could have been.”

But Bush’s presidency is mostly remembered by Sept. 11, 2001 and its aftermath. After 9/11, Greene said, the president wanted to be judged by the fact that there was never a second attack. “And there wasn’t,” the professor said.

When researching his books, he utilizes the Presidential Libraries, which is a collection of archives, museums and public programs. He prefers such documents as the main source of his information instead of just interviews with people who considers themselves political insiders. There are 15 designated Presidential Libraries dating back to Herbert Hoover, but documents for Obama and Trump are not yet available. Records are exempt for five years after the end of a presidential administration. After that, if the archives have even been established at that point, documents can be obtained through the Freedom of Information Act. The George W. Bush Presidential Library was dedicated in 2013, which was within five years after his administration ended.

Richard Nixon’s was not dedicated until 2007.

“Everyone wants to know if I’ll write about Trump,” Greene said. “I’m gonna be dead before any documents about Trump that are worth the paper they are written on are available. It will be a while before the right materials are there.”

When he is not teaching or writing, Greene enjoys spending time with his family. He is married with three grown children and one grandchild. He loves to read, of course, and follows St. Bonaventure University basketball and the Atlanta Braves with a passion. His fandom with the Braves dates back to when his children were infants. He would stay up late at night trying to get them back to sleep, and often, reruns of the games from the day before were on.

Beyond the books, articles and speeches, Greene spends time on one more medium, handwritten letters. He has stayed in touch with many students over the years, some dating back to the early 1980s. “A stamp,” he said, “is still the best way to get a point across.”

As COVID-19 runs its course, Greene still has plenty to think about and write about. He’s tinkered with the idea of writing a book about teaching or a guide to teaching. But, “maybe that’s just my age talking.” Still, he can’t imagine a day without teaching or writing.

“Retirement is not on the horizon,” he said, “as long as they keep letting me in.”

Featured image: Bob Greene is robed for an induction ceremony for Alpha Chi, the national student honor society, which he advises.

In his new book, “The Presidency of George W. Bush,” Cazenovia College professor John Robert (Bob) Greene presents a perspective that differs markedly from the negative judgment most of his colleagues have passed regarding the presidency of George W. Bush. Working through Freedom of Information Act requests to the George W. Bush Presidential Library and the National Archives, the author unearthed a trove of newly released information and documents that include some previously classified materials. These provide evidence that despite its shortcomings and defining response to 9/11 and the War on Terror, the Bush administration produced many positive achievements in social, domestic, economic, and national security policy matters, Greene says. 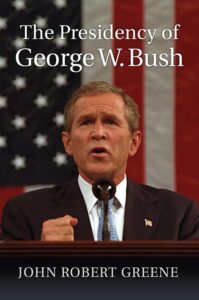 The assessment is documented in his book, The Presidency of George W. Bush, which has just been published by University Press of Kansas. Its publisher says it is the first scholarly work to make wide use of documents accessed from the George W. Bush Presidential Library and the National Archives through extensive Freedom of Information Act requests.

“I’ve been surprised at how wrong historians and journalists were in their assessments of the Bush administration in writing it off as a complete failure,” Greene says in a press release issued by Cazenovia College. “While there was much to criticize, there was much accomplished to its favor.”

As he writes, “When one looks at the ‘whole ground’ of the presidency of George W. Bush—domestic, economic, administrative, national security, and foreign policies in total—the need to revise the completely dark assessments comes into sharp relief. The evidence also makes it eminently clear that the Bush administration was responsible for many positive achievements, successes that have been largely ignored by contemporary observers. What Bush cared about most after 9/11 was keeping his promise to the American people to not let the country be attacked again. That was the most important thing. It came at many costs, but that was the measuring stick for him, although to some people, it was not enough.”

Greene’s book uses unprecedented access to a huge cache of documents and historical evidence to present a balanced assessment and nuanced conclusions of the Bush administration’s actions.

University Press of Kansas Senior Editor David Congdon elaborates on how Greene’s book uniquely takes a divergent look at a presidency that was defined predominantly by one issue. “As an editor, it’s always a pleasure when I see an experienced historian uncover new sources and shed fresh light on our history. Bob Greene’s book adds an important volume to the American presidency series, one of our most esteemed series at the University Press of Kansas. He already wrote the book on the elder Bush, so it was fitting that he tackled the younger as well. His book will set the standard for years to come.”