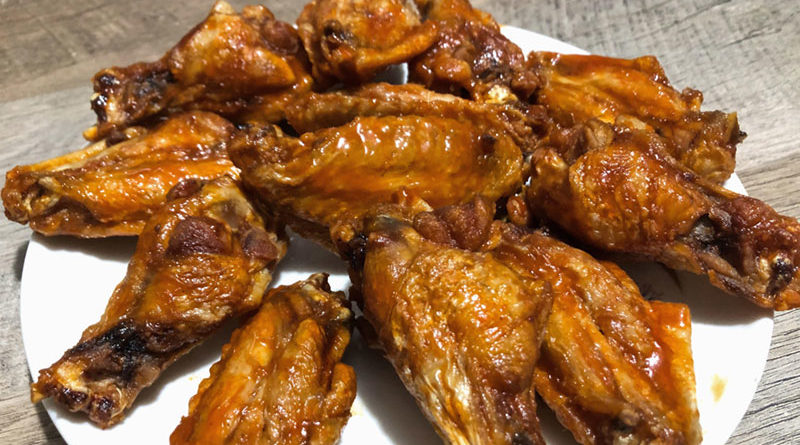 Let’s begin this review with a joke, a Steven Wright one-liner: “Everywhere is walking distance if you have the time.”

As I am soon to be a resident of the city of Syracuse Eastwood neighborhood, it’s time to explore all there is to enjoy: The Palace Theatre, two used book stores, close proximity to Downtown, and a plethora of food within walking distance. (See what I did there?)

Instead of a typical review, I visited places within (rational) walking distances and ordered one item. Since I can’t review a restaurant experience, I tried several and supported as many places as I could. All places are open for takeaway but temporary hours will vary.

Chicken wings were the food of choice. While on a run, I saw a piece of paper on Chadwick’s door offering 10 wings for $8. Below that read 10 wings and a can of beer for $10 — quite a deal. I ordered the medium hot wings and actually got a dozen. (Had I known this, the tip would have been more.)

The medium sauce wasn’t as spicy but the wings were no-nonsense. There was a good amount of meat on those bones and Chadwick’s skipped over battering the chicken. Not bad for a Steelers bar. 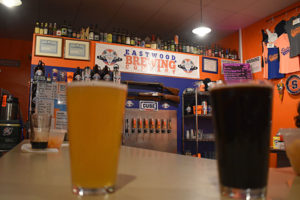 Eastwood is of my favorite local breweries. It’s a see-what-you-get establishment with very good beer. The C-4 IPA is a staple but I’m a fan of the New England style IPAs, including the latest N.E. SNEEZ. There are usually eight varieties on tap and something for all tastes. Now, you may not be able to stick around and play pinball but take beer away in a pint-sized can ($5-$8), a 32 oz. growler ($7-$8), or a 64 oz. growler ($14-16). Prices may vary based on style of beer. 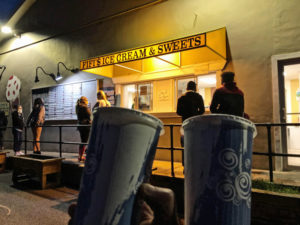 For hard ice cream milkshakes, they’re $5.50 each; take off a buck for soft serve ice cream shakes. My fiancé and I opted for two to share: Peanut Butter S’mores (everything about a s’more but with peanut butter and no chocolate) and Let’s Dough Buffalo! (cookie dough ice cream with cookie swirls).

The s’mores shake was on the lighter side and not as thick as expected. The flavor was still oh-so-good. Since the cookie dough ice cream has more goodies, the cookie swirls and bits of cookie dough, it was much thicker and delicious. 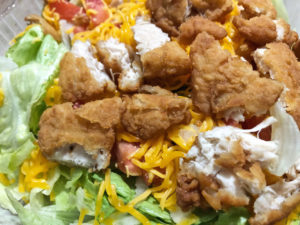 The small little eatery on James Street is a unique place. A clear conversation can be had with even standing at opposite doors. Goal Tenders has a convenient grab-and-go pickup window for their American fare — tenders to burgers and soda to milkshakes — comfort food. I opted for a chicken tender salad ($7). It’s not on the menu but they made it happen.

The salad is basic: iceberg lettuce, cherry tomatoes, chunky onion pieces, and cheddar cheese.  It’s wimpy so some spinach was added at home. The chicken tenders, however, are great! The pieces of chicken were lightly breaded, not overly fried or greasy. The chicken was far from dry.  For something quick and easy, it’s perfect. Knowing the number of restaurants that have vacated that location, I hope this stays. 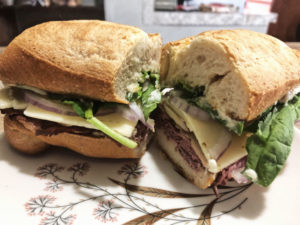 Not to be confused with the notable tyrants of the Sicilian city Syracuse, this sandwich and craft beer shop on James Street is making a statement. The roast beef and apple cheddar sandwich ($9.25) is served with those ingredients, fresh spinach, red onion, and a horseradish spread between the halves of a thick, toasted Italian baguette. It really is a mean sammy and all the flavors work so well together. The horseradish spread is mild but noticeable — it’s horseradish after all. This newer establishment lets their food do the talking, no lectern needed. 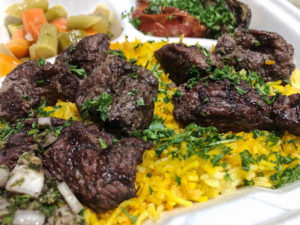 Last year, the Middle Eastern restaurant opened with much excitement. For those unfamiliar with ethnic food, this place should be tried. The item I chose was the lamb shish kebab ($19.99). Have it cooked medium or well-done (if you want to destroy the quality and flavor of the meat). It comes served on yellow rice, grilled tomato and onion, and pickled vegetables.

Sinbad’s lamb was super tender and cooking it over charcoal added a noticeable but not overwhelming smokiness. The same smokiness attached itself to the rice.

I also opted for the one slice of stretchy ice cream ($3.99). This refreshing dessert is light, airy, isn’t overly sweet like ice cream. It’s covered with pistachios, too, which significantly adds to the enjoyment.

So, yes, I opted for more than one item. I didn’t break my rule but stretched it. 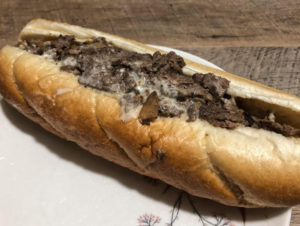 A Taste of Philadelphia

Philly cheesesteaks in Syracuse? Yes, they exist and they taste so good. The classic cheesesteak with mushrooms (two for $21.63), are worth it. They’re filling but light at the same time. I could eat two in one sitting but did not. The second was saved for the following evening and it was equally as good. The wonderfully shaved steak, cheese, and diced mushrooms were stupendous. My taste buds were at ease because there was no trace of bright yellow-orange fake machine cheese.

The roll was also notable. It was moist and not heavy (hence my desire to eat two in one sitting).

That concludes the tour! There is so much more to enjoy, including The Foul Ball bar, Fish Cove in Shop City (which is also the best in my humble opinion), and Ponchito’s. Unfortunately, I have only so much space to work with. Happy eating, folks. Please stay safe and healthy.