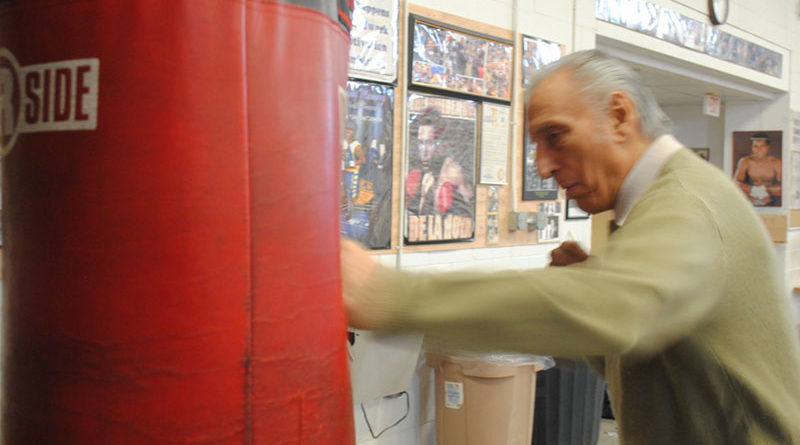 As I began my conversation with local boxing legend Ray Rinaldi, I asked him his age.

“That’s true,” said Chris Burns, a nephew of Rinaldi’s, the program director of the West Area Athletic and Education Center on South Geddes Street in Syracuse and its head boxing coach.

But what’s his secret to reaching 90 years young?

“He always says it’s the pasta fagioli and the wine, but as long as you feel the duty that’s left and something to be served, I feel that’s what keeps you young,” Burns said.

And that “something” for Rinaldi is the boxing gyms he’s run for 60 years and the thousands of kids, most of them at-risk, who have come through those doors.

Rinaldi opened the WAA-EC in 2005, a sister gym to the one he opened on Syracuse’s North Side in 1994.  Prior to those, he had managed gyms in other locales throughout the area.

He still comes to the WAA-EC for about six hours daily, and it’s something to see him holding the mitts for the athletes, or getting down and doing 30 push-ups when someone starts complaining, Burns noted.

He can still punch a bag pretty good, strike a pose in his gym, cheer on his “kids” in and outside the ring, and provide guidance when needed.

Rinaldi was born in Solvay and raised in Syracuse, one of eight boys and four girls, and it was one of his brothers that introduced him to the sport.

“You could say I was a wild kid. I got in a lot of fights,” he said. As Rinaldi tells the story, his brother, Tony, said to him one day, “Ray, I want to take you for a ride.” They went to a gym on the North Side, and he saw all these kids boxing. “Geez, I like that,” he recalled.

It turned out to be an afternoon that would alter his life as well as the lives of thousands of people for generations to come.

His days as a boxer, himself, were cut short, though. A car struck him in his younger years, and it would force him to give up any thoughts he might have had as continuing in a career in boxing.

A few years later, he entered the military, and after a stint at Fort Dix in New Jersey, he was sent to Frankfort, Germany. Because of that earlier injury, he wasn’t able to fight, so he became a coach and trainer.

He said that after he returned to the States, he thought he was done with coaching. However, a nephew encouraged him to help a buddy of his, so Rinaldi took them to his basement, where he had a speed bag set up.

After a few months, Rinaldi said, his wife, Florence, got tired of the house shaking, so he found a gym near downtown Syracuse.

The WAA-EC was an old McDonald’s Restaurant that friend Dominick Tassone donated to him. To get the building renovated and to keep it running hasn’t always been easy, Rinaldi said. He credited his friends and the community for their help.

But much of that success comes from Rinaldi’s tenacity and his belief in his coaches and the more than 6,000 kids, also known as “Ray’s Kidz,” that have come through the program.

“I’ve always managed to stay in there,” he said.

Since many of his boxers come to the gym as at-risk kids, he knows that some will be lured back to a gang, but if they stay with the training they receive at the facility, Rinaldi promises that most will see a change, especially if they enter the program while they’re young.

“These kids come off the street. Once in a while we lose one,” he said, meaning that they’ll go back to the gangs. “We tell the parents, ‘Look, you bring them here. I guarantee you in three weeks, they’ll change their attitude.’”

There are probably several reasons for that change.  One is that Rinaldi has three rules — no do-rags, no pants down to the knees, and no swearing. If the kids violate any one of those rules, they will be sent home that day.

In boxing you can’t do drugs, Rinaldi said. They “examine you before the fight, they examine you after the fight. [If you are not clean] you’re suspended automatically, professional or amateur.”

According to the website rayrinaldifoundation.com, Rinaldi and his team have “combined athletics, education and counseling programs, in collaboration with the Syracuse City School District and the Onondaga County Probation Department,” enabling them to develop a “structured after-school program for youth at risk.”

The facility, Burns pointed out, is “a hook to attract at-risk youth in the city of Syracuse into our facilities, where we then offer structured workouts, computer labs, and educational tutoring, all free of cost.”

Through boxing, the kids learn physical endurance, but beyond that, they develop greater concentration skills and self-esteem.

That Rinaldi’s interest in these kids goes beyond boxing is obvious in the stories he tells.

“I could talk about these kids all day,” he said.

He can tell of a number of guys who went through his program and onto professional careers in the ring. Upon retiring from boxing, they have often found success in the business world. He has helped and encouraged many to go onto college, where they get not only their bachelor’s but their master’s degrees as well.

But Rinaldi does more than just talk about them. He shows them off. The walls surrounding the boxing ring boast of collages with some featuring Rinaldi and friends, but mostly of the youth that have gone through the program.

One of those framed pictures on the wall of the arena is of Rinaldi with boxing great, Muhammad Ali, just one of the many boxing greats Rinaldi has met over the course of his career. He admitted to three favorites — Floyd Patterson, Gene Fullmer, and of course, Carmen Basilio, who hailed from Canastota.

Another copy of the Ali picture is in the corner of his office, situated in the front of the facility. The shelves, file cabinet tops and walls are covered with plaques, proclamations, trophies, and awards for all that he has done for the sport.

He’s an elite coach and trainer with the Golden Gloves Association of America, and among his honors are those from the North Syracuse and Canastota Lions Club; the Liverpool Optimist Club; the Knights of Columbus; and an appreciation award from the International Boxing Hall of Fame.

In 1997, he received the Syracuse Post-Standard Achievement Award for contributions to the community, and in 2001, he was inducted into the Greater Syracuse Sports Hall of Fame.

Despite these awards, Rinaldi is not ready to hang up the gloves just yet.

To that end, Rinaldi has plans to acquire the property next to the gym and turn it into a training facility, where one can learn a trade. He also wants to build another structure and use it as a family activity center.

As Burns said, “He knows that his job isn’t done here yet. He wants to keep seeing the center grow. He wants to see it achieve more and to make sure it’s left in good hands. That’s what’s keeping him young.”

Photo: Ray Rinaldi at West Area Athletic and Education Center in Syracuse. At age 90, he still comes to the gym for about six hours daily.