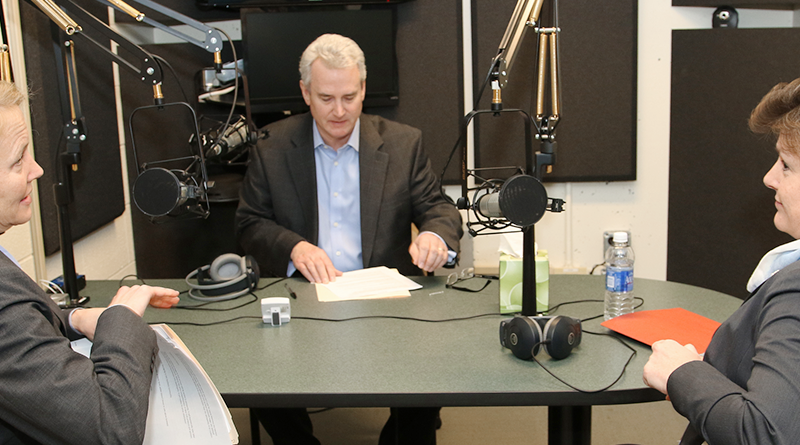 Grant Reeher developed an interest in government and democracy at the age of 8 while going door-to-door during an election season in Northern Virginia.

Nearly a half-century later, he’s rediscovered the thrill of why he got involved with politics in the first place.

Reeher, 57, is a political science professor at Syracuse University and the director of SU’s Campbell Affairs Institute. As part of that job, Reeher took it upon himself to create, produce and host “The Campbell Conversations.” The program, broadcast by National Public Radio affiliate WRVO, has been a huge success so far, and has re-invigorated Reeher.

He enjoys balancing the roles of political scientist, educator and journalist. The professor took some time out of his hectic schedule to explain how taking a chance on an unfamiliar environment paid off for him.

Reeher, the younger of two children, grew up in Springfield, Va., on the very outer edge of the Capital Beltway. Prior to working for a nonprofit research organization, his father, David Reeher, served as a B-24 co-pilot in World War II, flying combat missions in 1944 and 1945. He was shot down on what would have been his final mission, and was a POW for several months. The elder Reeher later became the first person in his family to go to college, taking advantage of the GI Bill.

“He was an avid reader, and pushed for the value of education, and of the life of the mind,” Reeher said.

Reeher’s mother, Betty Reeher, was politically active in the Republican Party. She organized campaign efforts at the local, state and national level. At that time, civil rights were at the heart of politics, and the push for better treatment for African Americans in the state of Virginia was coming from the Republican side.

Betty Reeher enlisted her son to help with campaigns, first for candidate Nelson Rockefeller and then for candidate Richard Nixon. Reeher still has his mother’s invitation to attend Nixon’s 1969 inauguration.

Reeher was a very strong student, graduating as high school valedictorian. Outside of the classroom, he competed on debate teams and worked part-time as a tutor. As a teenager, he was interested in studying public policy, but did not envision himself teaching. He chose Dartmouth College because of its strong academic reputation as an Ivy League school, and also because its proximity to mountains and outdoor activities.

Reeher loved being a student, continually earned high marks, and enjoyed the college campus atmosphere. It struck him that he should make a living at something he knew he was good at, so he set his sights on becoming a college professor and furthered his education at Yale University, earning a master’s degree and a Ph.D.

Despite a very tight job market for college professors, Reeher landed a job at Union College, where he taught for a short time before getting hired at Syracuse University’s Maxwell School of Citizenship and Public Affairs. While SU certainly had a great reputation and offered long-term career opportunities, Reeher admits that he was still a little unsure about the place when he first set foot in Central New York.

It was much bigger than the small liberal arts schools where he had envisioned working.

Within a short time, however, Reeher found that SU was a very supportive environment. He was pleasantly surprised to see how easy it was settling into such a big school.

“For a university of its size,” he said, “it took its teaching very seriously. The students get a lot of attention from the faculty.”

In teaching political science, the base of knowledge is always growing, but Reeher was also entrenched in a technological revolution that provided professors and students new tools and enhanced learning environments. While the digital age has afforded those on both sides of the lectern more conveniences for completing their work, it also presented new challenges.

“You still have distractions,” Reeher said. “Before it was just daydreaming, sleeping or side conversations. Now, phones in the classrooms complicate things.”

Another change Reeher has witnessed is the mindset of students. They seem to be more career-oriented and are eager to apply what they learn outside of a college campus. “It changes the nature of a conversation to what job they are going to get as opposed to what this material is about,” he said.

The Campbell Public Affairs Institute at Syracuse University’s Maxwell School was established in 1996. It promotes civic involvement in the areas of citizenship, public leadership and governance. It is heralded for hosting numerous lectures that are of interest to the university and regional communities.

Reeher, who has written books and contributed opinion pieces and columns to newspapers across the United States, served as a senior research associate for the institute and became its executive director in 2009.

Reeher really enjoyed his new career. One of the highlights was last year, when he moderated a debate between the campus Democrats and Republicans. The forum was jam-packed and the environment was lively, heated, and loud. It was a far cry from the energy, or lack of it, he had witnessed back in 2000 during the presidential election.

“It was standing-room only,” he said. “I was seriously worried about the fire marshal coming in. You wouldn’t have been able to get it going like this 15 years earlier. There had never been a debate like this publicly. It touched my soul to see that level of interest. There were a couple times I got civically verklempt!”

As a writer, Reeher went against the academic grain to some degree by gravitating toward personal interviews with sources over the more standard practice of researching journals, books and other types of publications. “The knock on my work,” he said, “was that it was too much like journalism.”

Still, Reeher’s columns for the Syracuse Post-Standard’s “Rethinking Albany” series were very well received. Over time, he thought he could contribute more in his area of expertise by way of newspaper pieces and broadcast news interviews as opposed to scholarly journal articles.

His heart was in civic engagement. He approached WRVO, which he has always considered a true talk radio station, with his idea for a program that serves an attentive public.

The station and SU loved the idea, and “The Campbell Conversations” was born.

For the program, Reeher has interviewed a fair share of local and regional leaders, but he also strives for variety, and tries to make the program eclectic. Recent guests have also included a woman who survived the atomic bombing of Hiroshima in 1945, and a local author who published a book about his teenage battle with alcohol and drug abuse.

Around the time of this interview, Reeher was planning an upcoming conversation with a Medicare expert in New York City.

During the program’s infancy, every guest was asked to identify their worst trait, and then note what accomplishment or achievement has most surprised them. As luck would have it, Reeher’s very first guest was Elliot Spitzer, who had only recently resigned as New York state governor under scandalous circumstances.

“He was authentic and engaging to the questions,” Reeher said. “He was really game with this.”

Reeher aims to present conversations that are topical and related to the issues of the day, but not necessarily driven by what’s happening at the moment. As a political scientist, he does not approach this role as someone who has more insight. Instead, he just sees himself as someone who can approach a topic from a different light.

“It’s not an advantage,” he cautioned. “It’s just a different perspective.” Reeher added that producing

“The Campbell Conversations” is much more difficult than his academic colleagues think. The order of how the questions are asked matters, and forecasting the length of a conversation is not something that can be done by scribbling some notes on a matchbook a few minutes before the taping starts.

Reeher and his wife, Kathy Sowards, have one son, David Reeher. They live in Manlius. David is a college student and Sowards works as a psychotherapist who specializes in EMDR, a therapy that focuses on talking and eye movement.

An avid outdoorsman, Reeher’s favorite hobby is fishing with his son. David Reeher is advanced in the art of flyfishing, while Grant Reeher prefers traditional angling techniques on Limestone Creek or Otisco Lake.

Reeher used to play squash and run long distances to stay in shape, but two major back surgeries have sidelined him from those activities. As part of his recovery, Reeher rides a stationary recumbent bicycle. So far, he’s gained enough strength and mobility to return to one of his other long-time hobbies, hiking. This past summer, he made it to the top of Mount Moosilauke in New Hampshire, which is 4,802 feet high. It’s the same mountain Reeher climbed on his first day of orientation back when he was a freshman at Dartmouth.

“The main challenge so many years later was just having the wind to do it,” he said. “Getting to the top, looking around and thinking about how much has changed since I first came here, it’s pretty special.”