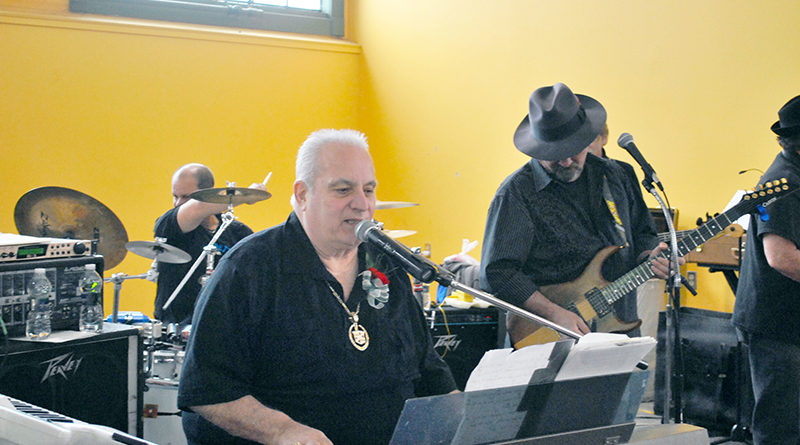 For Syracuse bandleader, keyboardist and singer Mickey Vendetti, it’s all about music, family, and making his audiences happy.

With his career that has spanned six decades, he’s been able to bring all that together in harmony.

The band features Vendetti on lead vocals and keyboards and occasionally the accordion; Mick Jr. on drums, and Josh backs up his father on vocals and does a lot of the pre-show setup.

Rounding out the band are Tom Crosier (aka “Commander”), Dick Guyer, Marc Cassele, and Frank “Otis” Vincent.
At the age of 75, Vendetti has been in the local music business for 60 years.

He started at the age of 15 at the Seneca Grill, which had been located on Syracuse’s near west side. With the mix of people the bar attracted, it was a great learning experience, he recalled.

“I’m the oldest fart in the whole band,” he said, with a hint of pride. Music “gives you life. It makes people happy,” he added emphatically.

Family figures into his audience too, as was evidenced at a recent gig at the International Pavilion at the New York State Fairgrounds, with members of the Vendetti family occupying tables along the front section of the venue.

His family was also with him recently when the musician, then 74, went through open-heart surgery, the first operation he’s ever had.

”My whole family was right there with me,” he said. “I never would have pulled through without them, no way.”

And pull through, he most definitely did. Three months later, he was back on stage.

“As soon as I got on stage, it was like it never happened,” he remarked.

His family has also inspired one of his more successful recordings. Dedicated to his mother, Mary Vito, “Sentimental Journey Unplugged” features tunes that were some of his mother’s favorites, including classics done by legends Dean Martin and Frank Sinatra.

That CD, Vendetti said, sold more than 3,000 copies in Syracuse.

Apparently, the recording was emotional for him to produce.

“An album that should have taken 20 minutes to do, because we know the songs so well, took me two hours to get them out,” he said.

Those were the greatest songs ever written, he claimed.

“That’s why I start the band out with music of your life, pointing right at that era,” he said.

Have a good time

The group’s name — Goodtime Band — tells audiences what kind of music they can expect, such as tunes from the 1930s to the 1970s and into the ‘80s, Vendetti said.

The band’s website — www.mickeyvendetti.com — describes its music as “a bit of Sinatra, a dash of Elvis, a touch of The Temptations, and now sprinkle in some Bob Seger and a little bit of country, and frost it with golden oldies topped off with some classic Louis Prima swing tunes and you have the Mickey Vendetti formula for a good time.”

According to the bandleader himself, “It makes people happy. Good time fun music. You can’t help but tap your fingers, move your feet.”

He may even begin finding a new audience among the younger generation. People of all ages can connect with it, he noted.

“The kids are relating to it because the music is coming back in films as key songs  — “Lean on Me” and “My Girl.” They’re all coming back as classics,” he said.

Making people happy is keeping him quite busy these days.

He estimated that he does about 100 gigs a year, and a recent ad for the band in a local Pennysaver that ran for two weeks generated 25 calls and at least 12 bookings.

Part of their popularity, he believes, is not only the wide range of music they can play, but the band’s ability to be flexible with people’s schedules and budgets. Although the group is often seven pieces, he can tailor it to be two- three- or four-piece combos.

This is all on top of owning two restaurant/taverns in Syracuse — Mickey’s Goodtime Saloon, near Shop City, and Gilligan’s Pub on James Street in Eastwood.

Over the years, Vendetti has owned or leased other similar locations that have provided venues for local musicians to perform.

“Wherever we have a place where we can use them, of course, we’re going to,” he said. “Local talent is where it’s at for me.”

His biggest musical inspiration is also homegrown — Jimmy Cavallo, a legend in the industry.

Cavallo is well known to Syracuse audiences of a certain age, having played extensively in clubs in and around the Syracuse area.

Some of Vendetti’s fondest memories of his musical career have been sitting in with Cavallo.

Another inspiration, Vendetti said, is Prima.  Although not a local musician, Prima is well known for his tune, “Jump, Jive an’ Wail,” which is, appropriately enough, a standard on the band’s playlist.