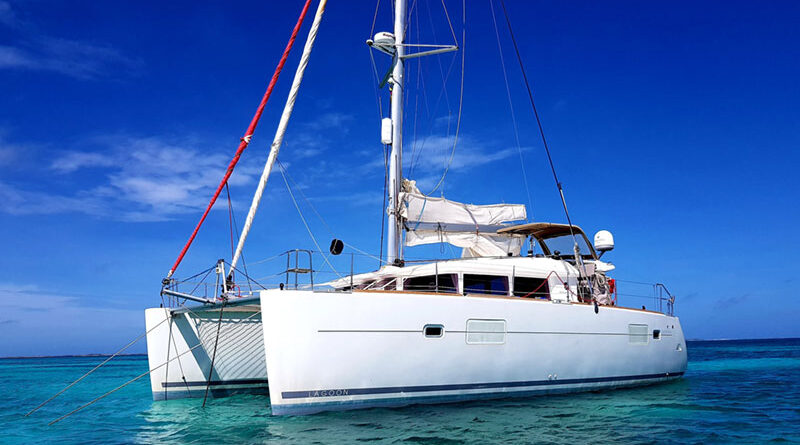 Newlywed couple drops everything to sail the world 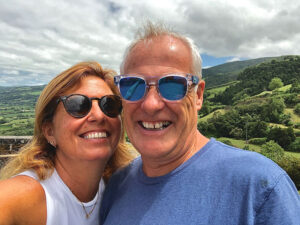 You get to this time of your life — the kids are out of the house and on their own, the job has matured, and you’re really, really settled down‚ and you ask, “What’s next?”

Simon and Carla Fowler got to that point five years ago — two days after they were married in Barbados with their four grown children as witnesses.

“Carla suggested to me that we should sell everything, buy a boat and sail the world,” Simon said. “I thought about it for all of a few seconds and replied, ‘Yes.’

“Just 14 months later we stepped onboard our boat, Ocean Fox, in Croatia for the first time and began to make the dream a reality.”

Simon, 61, and Carla, 55, are British. He was the managing director of a Live Events Agency in the UK. “I’ve staged corporate, sport and government events in 44 countries, including the G8 Summit in London,” he said. Carla owned a real estate agency in Portugal, then came to London and worked as a personal assistant.

“I always say we met at High Wycombe Railway Station for the first time, which we did,” Simon said, “but we met online while living in London. Initially, the relationship did not progress any further — until the summer of 2015 that is. It was then when I sent Carla a text asking if she would like to meet up again.

“At that moment, Carla was on a layover in New York with her two girls and fortunately set her phone to roaming. She agreed to meet up with me the following weekend after her return to London.

“Over a glass of red wine, we agreed to give the relationship a go for a few weeks and see how we would get on. We never missed a weekend and slowly but surely, our relationship blossomed and 18 months later we tied the knot — just after Christmas.”

Simon had been a sailor since the age of 10. “I’ve owned four monohull yachts before and sailed around the south coast of the UK and over to France and the Channel Islands,” he said, “but I’d never sailed anything as large or as powerful as Ocean Fox.

“I had never sailed before, when we decided to make this a way of life,” Carla said. “As a child I grew up first in Angola and then in Brazil. My parents always had motorboats for fishing. When we moved on to Ocean Fox, my sailing experience was one weekend in the Solent and a five-day sailing course in Spain: this was a huge step up, to go from there to crossing the Atlantic.”

Could someone who owned a large sailboat on Lake Ontario translate those skills to a craft and a lifestyle like Ocean Fox?

Simon had some advice: “The smaller the boat you have, the more you have to hone your sailing skills; on a larger vessel, things tend to happen a little slower. For example, going from a sailing dinghy to a small yacht is quite simple as you have the sailing skills. You may have to expand your knowledge of navigation, pilotage, tides, those kinds of things.

“A good idea is to go on a week’s ‘Live-aboard Experience,’ this is different from a charter. The idea is, you give people the real experience of living on a boat, the good and the bad; for example: checking in and out of countries, how to make fresh water, how to change and refill the gas, the ongoing toilet issues, provisioning and cooking on a boat. It is a great way to see if this lifestyle is for you.”

Ocean Fox was built by Lagoon of France in 2012. She has three cabins, two heads with showers, two Yanmar 30HP engines, three sails, and can carry 400 liters of fuel and 600 liters of fresh water. She was purchased in Croatia, and the Fowlers weighed anchor and headed south to Montenegro, Greece, Crete, Corfu, Italy, Sicily, Ustica and Sardinia.

They went past Gibraltar and Spain, then crossed the Atlantic by way of the Canary Island, Cape Verde to Barbados. They weaved through Caribbean islands, went on to Columbia and Panama and Mexico, then came back across the Atlantic via Bermuda, Barbados and the Azores, back to Carla’s home town of Viana do Castelo in northern Portugal.

Along the way, the Fowlers became YouTube stars, regularly recording their adventures and places they visited. Watching Carla climb the mast and unfurl a sail in episode 129 is noteworthy.

They learned a great deal about themselves on the way.

“We have discovered that we can do whatever we want with our lives. Before we set off, Carla had not really sailed and I had not for 15 years, nor had I crossed an ocean. We had never run a YouTube channel or edited a video. I knew nothing of social media. But we learned together, and slowly we have realized, probably for the first time in our lives, that anything you want to do is possible. You just have to have a passion, a desire and learn quickly. Now we feel if the will is there, we could take on far greater challenges.”

There have been some moments.

“Coming back across the Atlantic was a hard passage for the two of us,” Simon said. They had a crew on the way west, but came back to Portugal alone. “The journey from the Bahamas to Europe by the way of Bermuda and the Azores was a long way: the lack of sleep, the constant movement of the boat and the ever-changing weather. It felt a long way and we were both exhausted for a month afterwards.”

On a trip from Portugal to Lanzarote in the Canary Islands, the Fowlers ran into the tail end of a hurricane. “We had 63 knots of wind in the original blow, and over 40 knots for the rest of the passage. The seas were like office blocks and just kept coming one after another,” Simon said. “We stayed hunkered down inside for the total time. Carla was seasick for the whole passage and after the third night, I was delusional and hearing things. But it came to an end as we neared the island. It was soon forgotten after our first meal in four days…and a cold beer.”

Alone on the ocean, the best time of day is 1200 hours (noon). “We plot our position and calculate how far we have traveled and how far to go. We can travel anywhere from 140 to 185 nautical miles in a day,” Simon explained. That distance translates into 161 to 212 miles.

“The daylight is spent resting, catching a nap, eating or reading. Starting at 7 p.m. in the evening, we split the night into three-hour watches: Carla normally does the 1900-2200 [7-10 p.m.] and the 0100-0400 [1-4 a.m.] watches and I cover the other two. We tend to listen to Podcasts at night to help the time pass away. We are monitoring the boat and watching out for ships or boats on the AIS system [Automatic Identification System] or lights out at sea. We limit the sail changes at night, but if we have to make some, we both go on deck with our life jackets and harness on — we don’t want to go over the side at night.”

Carla prepares most of the meals before they leave dockage to cut down on the cooking time during the passage. “We follow a low-carb Mediterranean diet and make little changes when we are at sea. We do fish a lot and we both enjoy having fresh fish to eat, including mahi mahi, tuna, barracuda, yellow jack and snapper,” Simon said.

Their best day in the boat?

“I think the time we spent in Los Roques, a group of islands off the coast of Venezuela,” Simon answered. “There are about 135 islands and all except three are deserted, the waters are blue, beaches are white and totally empty. We were in heaven for a week with island after island to ourselves.”

Do they miss anything, being on the water alone for so long?

“This life is very fulfilling. I did think we would miss our friends, as we were very sociable back in the UK, but it is so easy to meet like-minded boaters — you just pick a boat, knock on the hull and invite them over for Sundowners. Material things we just don’t miss, but when we were in the Caribbean we did miss good supermarkets, bananas, and the chance to buy clothes from the brands in Europe.

“Carla and I feel very close, closer than we would have if we had not entered on this journey. We rely on each other for everything, including our lives at times. It is a small space and a long time with just the two of us.

“ I would not recommend this lifestyle if the two of you did not get along well.”

Photo: The Fowlers sold their home and just about everything they owned to fund their adventure. They bought Ocean Fox, a 6-year-old 40-foot catamaran for more than $300,000. The Ocean Fox was built in 2012 and carries two motors, three sails, and has three cabins.

Carla and Simon Fowler started their voyage in April, 2018, 15 months after getting married. Their ship, Ocean Fox, is their home. Carla has family in Portugal, so they have tended to do a lot of sailing there — but they have been to many, many countries — 29 and counting. They may stay in a location for a week or more, or go from port to port, in a short clip, or travel a large expanse of ocean — they’ve crossed the Atlantic twice. In essence, they’re still traveling and will continue to sail as long as they can.

To write this story about their adventures on the seven seas, I contacted them by email while they were off the coast of Portugal. For the next week or so we exchanged emails. I asked questions and they responded in detail. Then I asked a fresh set of questions until I had enough for the story.

I now enjoy keeping track of them through their YouTube site, “Sailing Ocean Fox,” their Facebook page of the same name, and their website, sailingoceanfox.com (where you also help sponsor them and check out a lot of photos). Some of the content is travelogue, some is wisdom and humor, and some is do-it-yourself yacht repair.