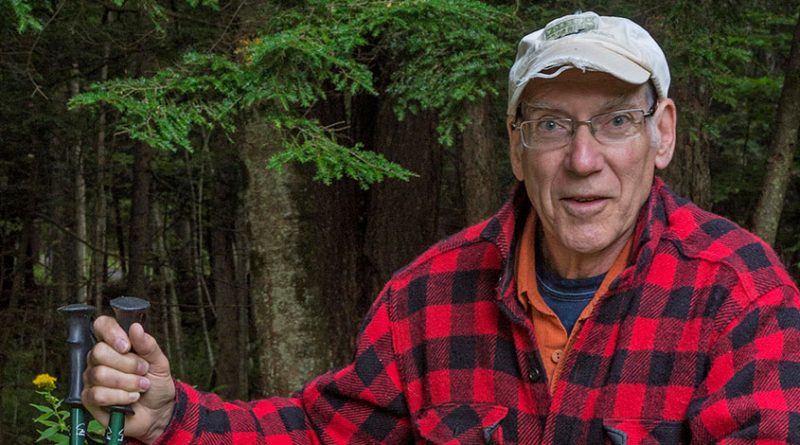 William ‘Jay’ O’Hern has published 17 books about the Adirondacks, a place he knows like no one else. He has 10 more planned

William “Jay” O’Hern spends most of his free time in the Adirondacks. He prefers to bushwhack his way into the deepest woods possible and camp in solitude.

With every trip, the first thing packed is a pen. For every day spent exploring, canoeing or fishing, at least three more days are spent researching and writing.

“It’s a wonder how I did it,” said O’Hern, 77, who lives in the town of Vienna in Oneida County, near the north shore of Oneida Lake. “I didn’t sleep a lot because I didn’t want to stop.”

He uses his own publishing company, In the Adirondacks Outdoor Books. They can be bought on his website, Adirondackbooksonline.

Much of the research for his latest book dates back to 1967.

“Father Time,” he said in a recent interview, “really does pick one’s pocket.”

O’Hern, a retired middle school teacher, grew up in the Fairmount section of Camillus, before it became a sprawling suburb. His father was a truck driver and his mother taught school. As a child, O’Hern explored the woods and farmlands near his home, packing a lunch, peddling off on his bike and not returning home until dinner time. Weekends were spent at his grandparents’ summer place on the Seneca River or camping with his family on Eighth Lake.

While completing a bachelor’s degree from SUNY Oswego, working as a teacher in the Camden school district and raising a family, O’Hern still got to the mountains. Every weekend for a period of about 25 years, he explored new spots. Over the years he became friends with Richard Smith, an Adirondack enthusiast and historian. Smith, who was 30 years older than O’Hern, asked his friend to preserve the tales of interesting places, people, and the vanished way of life there.

“I still remember that day. It was our last paddle on the Chub River. He dropped a bombshell on me and said it has to be written,” O’Hern recalled. “I wasn’t trained as a writer, but I also know as a sixth-grade teacher, you don’t tell someone they cannot do something.”

O’Hern was particularly intrigued by the area’s rich history of logging and hunting camps. He also took an interest in the man who was known as the last Adirondack hermit and the mayor of Cold River, Noah John Rondeau, who had also been a close friend of Richard Smith. His first book, “Life with Noah,” was published in 1997.

In addition to writing, O’Hern’s work on this title also gave him a taste of archeology and social anthropology. When he went off the beaten path, he found artifacts from settlements that no longer exist, and met people who could help him piece together the history of those forgotten places. Town historians, museum curators, local publications and the descendants of the area’s early settlers lent him plenty of old photographs to supplement the pictures he took along the way.

Moose River Plains is located east of Old Forge, south of Blue Mountain Lake and northwest of Speculator. From the road, it appears to be very secluded. The area is about 40 miles long by 25 miles wide, dotted with lakes, ponds, streams and rivers. Much of it is heavily forested and without clearings. This country, O’Hern wrote, was once labeled “the land of deer” and was frequented by conservationists, rogue hunters and even a few vacationing millionaires.

One of his titles, “Spring Trout and Strawberry Pancakes,” is a cook book. All of the recipes were provided by Adirondack residents who only use local ingredients, like fresh-picked strawberries, venison or trout. Naturally, O’Hern had to try everything that was noted in the book.

Recipes can be found in many of his other books as well. “Moose River Plains” includes the ingredients and instructions for preparing one of O’Hern’s favorite family recipes, Fulton Chain beef stew and herb dumplings. He enjoyed this when camping with his parents at Eighth Lake Campground.

“This was another cast iron pan recipe,” he wrote. “Mom said it was a solid meal with feather-light dumplings. The ingredients cost $2 in 1953.”

In his author’s note, O’Hern pays tribute to the former Red & White grocery store in the hamlet of Inlet, which was owned by Gordy and Inez Rudd. The couple provided him several high quality black and white photos of the store and its stocked shelves dating back to the mid-1950s.

“Wide-eyed children peered through the glass display at a selection of hard candies, candy bars, chewing gum, and sparklers that added gaiety for children building their own campground memories spent during Fourth of July weekend. There are still a few old country stores surviving throughout the rural North Country, but now they are without the wood-burning stove and a few sturdy rocking chairs around which once the weather, politics, local news, and hunting and fishing tips were exchanged,” O’Hern wrote.

“Buying and selling habits changed as roads improved, railroads became widespread, and motor vehicles became common place. Farm products could be transported by rail and truck. The old-time Adirondack store may be for the most part a thing of the past, but nobody would deny how well it served its purpose and answered the needs of a growing mountain community.”

One of O’Hern’s earlier titles, “Adirondack Kaleidoscope & North Country Characters,” pays tribute to Glendon Cole, who published his own book in 1946 and wrote for North Country Life magazine for 37 years. O’Hern considered Cole to be the finest steward of Adirondack history.

“I read that magazine growing up,” O’Hern said. “I told him to put his best stories together in a book. He said, ‘good idea, but I’m too old.’ So I did it.”

O’Hern and his wife, Bette, have five children, 14 grandchildren and one great-grandchild. Bette also enjoys camping.

Beyond the Adirondacks, the couple has also visited Vermont and the White Mountains in the Adirondacks. O’Hern has also taken on a keen interest in exploring the Tug Hill Plateau.

O’Hern reads a lot to stay sharp. He also enjoys walking and snow shoeing. Although he does not get around as quickly as he used to, he still enjoys being in the mountains year-round, even in the dead of winter. “I run to it,” he said.

O’Hern has climbed all 46 of the Adirondack Mountains’ high peaks and has visited every area of the Adirondack State Park (the largest state park in the nation). He’s always preferred the southwest section of the park, which includes the Moose River Plains.

“It’s the least populated,” he said. “I’ve always been a loner. I always want to go to places where you won’t find people.”

O’Hern grew up in a family that raised their own meat and grew and canned their own vegetables.

He carried on that tradition when he and Bette raised their children. In fact, the others would be on the hook for maintaining their small farm when O’Hern made his weekend trips up north. That holistic life style allowed him to maintain a relatively healthy diet throughout his life and he has avoided fast food, though O’Hern admits that once their children were grown and out of the house, he and Bette enjoyed trying the many outstanding restaurants located throughout the Adirondack Park.

With 10 unpublished manuscripts on his desk and a whole host of ideas for future books, O’Hern feels like he has plenty of passion to continue writing into his 80s and beyond. Even if it gets to the point where he can’t hike or snowshoe quite as far into the brush has he once did, he will never lose his desire to continue learning and writing about his favorite place on earth.

“I’ll never be short on material — that’s for sure,” he said. “I just do it for the love of history.”