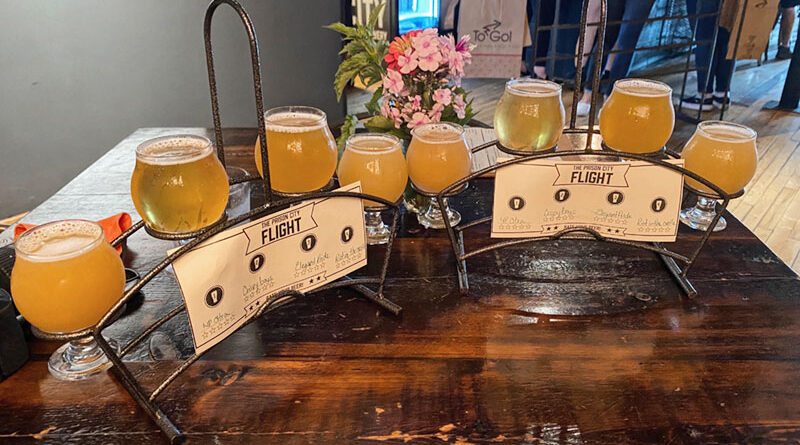 Auburn is notable for many reasons — a rich history, a city in the Finger Lakes region serving as gateway between the central and western parts of the state, a unique equal rights and heritage center and a notable maximum-security correctional facility, which hosted the first execution by electric chair.

For a small city, there is a lot offered, and this includes Prison City Pub & Brewery, which is located at 28 State St.

Since the brew pub opened its doors in 2014, up until last year, I lived in the fictitious local novel called “A Tale of Two Brew Pubs.” It’s an interesting story told from a first-person perspective. The narrator, who is comfortable frequenting his native city of Syracuse’s brew pub, has his integrity and loyalty tested with a new, intriguing establishment in Auburn. Things get heated in 2015, when said narrator works and writes in both cities. Since then, due to its hubris, the Empire has fallen.

Prison City is growing itself as well, hopefully taking things at a gradual pace. This year, the North Street farm brewery location is set to open. COVID-19 cannot keep progression down, nor in-pub service.

My now-wife and I began our meal with flights of the in-house beers. Typically, we’d order a couple flights of a wide variety of beer to share. Prison City only had four in-house brews available, so we got our own sets of 5 oz pours ($8/flight).

This installment of the Riot series is not only a well-balanced collaboration between local breweries but a hefty hazy. Crispy Boys is a wonderful gateway craft for people who normally enjoy light domestics. The Elegant Pride lives up to its name, brewed with Mosaic hops, lemon zest, and mango herbal tea. The mango tea really stands out but isn’t overwhelming.

Brussel sprouts ($12) was the appetizer of choice. Several ample-sized sprouts were joined by pieces of crisp pork belly, honey, house beer mustard, and crumbled goat cheese. The sprouts were charred on the outside and soft and green beneath that crunchy shell. With all the ingredients combined, it was a tug-o-war of flavor but not in the bad sense. With each bite, the components of the dish took their turn and the overall experience felt magical. Who knew with Brussel sprouts?

Next, we tried the shrimp lettuce wraps ($15). The wraps are served as a pair, enough for two people. Three large shrimp sit upon two thick strips of bib lettuce. They were accompanied by peppers, onion and scallion, thin strips of carrot, and were dressed in a sesame garlic oil. The flavor did not lack but the biggest challenge was trying to pick up the “wrap” and eat it. Approaches may differ but failure seemed inevitable when trying to sandwich loose ingredients between the strips of lettuce. For a side, we opted for a salad with balsamic dressing.

Next came the flank steak ($17) and the pork fried rice ($14) as our entrees or brewhouse plates. Bring on the pork belly! Prison City’s take on the rice dish featured sriracha-glazed pork belly, zucchini, peppers, onion, and (of course) rice. A vibrant sunny side egg sat atop, waiting to get mixed in. Not one part of this dish was bland or dry. It did come by itself, however, which felt more like a shareable small plate.

The flank steak, which came out medium rare as requested, was served on three CD-sized discs of homemade garlic naan. Chimichurri and the roasted red peppers piled on the flavorful meat was a great compliment. As a whole, the flavor of the naan, steak, and garnishes were well-balanced. It could have been cut up and eaten like open-faced sandwiches but the naan was strong enough to pick up with the toppings, especially when these were evenly distributed.

To accompany the steak, we asked for fries. The house-cut side dish was more of a mound of crispy, lightly salted strips. Prison City’s pub potatoes were a great compliment.

The total bill came to just over $82 before tip. Prison City boasts hearty food and a comfortable atmosphere — even during the days of COVID-19 restrictions — to sit, hang out and relax. Enjoy one of their craft beers or one of the many guest beers on tap to sip as you savor one of the many offerings on their menu. Plus, there is a kid’s menu!

Photo: A flight of in-house beers comes with sets of 5 oz pours.