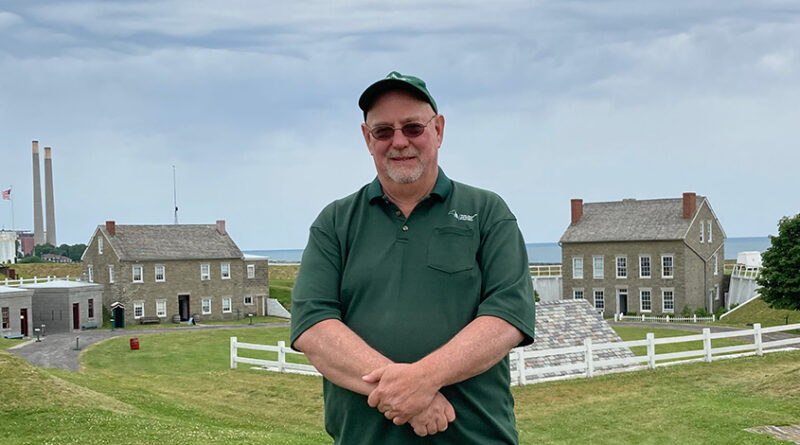 Fort Ontario was in every war in history from the French and Indian War to the global war on terror.

Q. How long have you been working at Fort Ontario?

A: I’ve been here twice. I worked here from 1986 to 1992 as interpretative programs assistant. I ran the Fort Ontario Guard, all the interpretive programming, special events, exhibits, all sorts of things. On Oct. 1, 1999, I came back as manager of the fort. I got the restoration plan program going again, I rebooted interpretation.

Q. What are your responsibilities?

A: Overall command of the Fort Ontario State Historic Site, responsible for all aspects of its operation.

Q. What is your favorite part of the job?

A: When the public walks through the door. That’s the best time.

Q. After so many years at Fort Ontario, what is it about the job that keeps you interested, keeps you engaged?

A: We discover something old about the fort every day. It’s a phenomenal time to be a historian because of all the resources that are online now. Fort Ontario is unique in its length and diversity of history. Most historic sites are a battle — very much one-dimensional. But Fort Ontario? There are more dimensions than you can imagine — you’ve got the French and Indian War; the Revolutionary War; the War of 1812; the Civil War; World War I as a hospital; then the New York National Guard, with the [present] Army. And the refugees. There’s no place like this. An Army Reserve company maintains a center here. They continue the military history of Fort Ontario Military Reservation that dates back to 1755.

Q. What about The Safe Haven?

Q. What are some of your accomplishments or programs that you’ve put in place during your tenure as the manager?

A: I have opened up more parts of the fort to public viewing enjoyment in my tenure, I think, than anyone. Every underground casement is now open. All the buildings are open; there are a few rooms that are closed. I restored the guardhouses and furnished them, modernized the exhibits; and restored the powder magazine. I developed special events that are pretty unique. I established the Fort Ontario Conference on History and Archaeology. That was a measure I took to try to advance the reputation of Fort Ontario on more of a national scale. Everything I’ve done is to try to elevate the prominence and awareness of Fort Ontario.

Q. What are three things about the fort that might pique people’s interest and encourage them to visit?

A: To learn that it’s the birthplace of United States refugee policy, it’s where the first group of refugees was allowed into the United States outside the immigration quota system. All refugee historians trace the beginning to Fort Ontario.

It’s literally where the Holocaust came to America. It’s where everyday Americans—Oswegonians first met the victims of Nazi persecution and learned their stories and became their advocates. Holocaust stories, because of Fort Ontario, were moved up to the front page of American newspapers. The fort and Oswego were very significant in the French and Indian War, as well.

In 1941, the Harlem Hellfighters were sent here. They were converted from infantry to aircraft artillery. That’s a real milestone in the civil rights movement — the Harlem Hellfighters being converted to a technical [United States Military] field here. It’s also where the first group of Buffalo Soldiers was assigned to duty east of the Mississippi in 1908. (The “Buffalo Soldiers” is a term which has become synonymous with all African-American regiments formed in 1866 and the nickname came from Native Americans.)

Q. Why do you think it’s important to have a museum like Fort Ontario?

A: It was preserved as a shrine to those who’d served and sacrificed for our country, for our freedom. Once people get here, part of our mission is to educate them, to share its history, to raise awareness and let them learn about history and things that happened here, [and] try to inspire them.