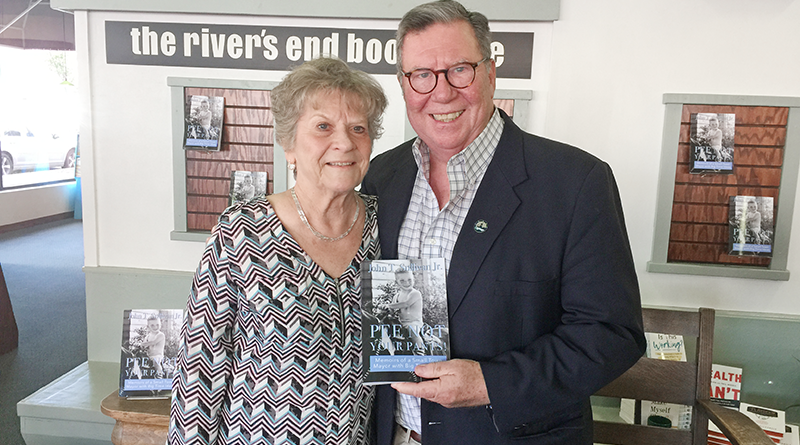 There’s no doubt about it: John T. Sullivan Jr.’s new book has an eye-opening, if incredulous title.

Secondly, if the nuns from his elementary school were alive today and thumbed through his childhood memoir, they would certainly administer a stern licking, enough to make a grown man do more than pee his pants.

The title of his 267-page book alone, “Pee Not Your Pants — Memoirs of a Small Town Mayor With Big Ideas,” with a cover photo of a toddler (Sullivan) riding a hobby horse, is enough to send any reader into rolling-in-the-aisles laughter.

However, when skimming his bio on the book jacket, one gets a totally different picture. He sounds like a man with a more serious demeanor than the lighthearted title his book suggests.

He is a former mayor of Oswego, a former aide to New York State Gov. Mario Cuomo, a high school teacher and an adjunct professor at one time, and a corporate lawyer for 40 years, among a range of careers.

In addition to his lessons learned in the classroom, Sullivan offers an inside look at small-town and state politics.

With the publication of his second book, Sullivan reveals himself as a full-blown, 71-year-old of Irish-Catholic background with a twinkle in his eye and lots of witty tales to tell.

Not since Robert Fulghum’s “All I Really Need to Know I Learned in Kindergarten” has there been a book filled with homespun recollections.

Sullivan, an Oswego native, contributed to the community in many ways during the 55 years he lived there. Despite his deep roots, he reveals in his book that he had an itch to get away from his hometown too.

It took a brief spell in the Midwest to appreciate the small-town values he grew up with and lured him back.

“Oswego will always be my home,” he said. “My first book, “Forks in the Road” (2015) explains why. I have never lost the self concept of being that paper boy in the neighborhood, and the ability to communicate with people from all walks of life, regardless of their economic or educational station.”

The book delves into his formative years. His father worked full time as a linotype operator at The Palladium-Times in Oswego in an era with strong union activity, and also ran a diner and a concession stand at sporting events.

His mother was a housewife who cared for three children and later worked in food service at SUNY Oswego.

“They were very proud, and encouraged me to follow my star wherever that led,” he said.

He endured 12 years of a Catholic education that though it seems spartan by today’s standards, placed a premium on ethics and selflishness.

His parents, shaped by the Depression and World War II, gravitated toward Franklin Roosevelt and Democrat Party policies. Raised on idealism, young Sullivan was destined for a career in public service.

“I even got to serve as an intern in the Washington office of Sen. Robert F. Kennedy for two weeks while I was in college,” he said. “That was a very formative and memorable experience in many ways.”

As a senior at Oswego Catholic High School in November 1963, while attending the CYO convention in New York City, he got a fleeting glimpse of President Kennedy’s motorcade. One week later, Kennedy was assassinated.

“Our lives forever changed that day, and I don’t think for the better,” he recounted.

Sullivan graduated from SUNY Oswego with a degree in political science before attending Syracuse University College of Law.

Closer to home, another role model was former Oswego mayor and Oswego County Democratic Chairman John Conway who was instumental in introducing his young protege to the political machinery in Albany.

With Conway’s backing, Sullivan became an Oswego County legislator at age 23, the youngest person in county history elected to the legislature.

A genuine interest in improving the community led to a decision to run for mayor. “We chose to remain here and practice law and raise our children here,” he recalled. “I didn’t see the city heading in the right direction.”

Sullivan squeaked by four opponents, capturing just 36 percent of the vote. He served one term, 1988-92, and admitted he wasn’t popular enough to win reelection.

Early on in his term, expanding on his campaign theme, “Set Sail With Sullivan,” he began focusing on waterfront development. With significant credit to his wife, Charlotte, the city developed Harborfest, the popular annual summer festival.

Following his term as mayor, Sullivan broadened his scope of activities to include all of New York state and worked on the fringe of national politics. He became co-chairman of the New York State Democratic Party (1995-98). He served as the state’s assistant attorney general in charge of the Watertown office (2003-2007) and retired as deputy Medicaid inspector general in 2009.

Sullivan, who supports term limits, admitted that the concept of pubic service has become tarnished and has lost its luster among young people.

“Public service, to me, is still a noble profession, but it has been sullied by the proliferation of office seekers and holders who put self above service, and are more concerned about what’s in it for them, than what good they can do for the commonwealth,” he said.

From 2010-2013, he was an adjunct teacher of political science at three different universities in the Midwest. “I enjoy the classroom, and love to regale students with my real life political stories, and to see the light bulbs go on in their head,” he said.

Sullivan grew up as the middle child between two sisters and from his mother on down, he has always been surrounded by confident, successful women. His older sister, Gail, became an executive secretary to a hospital administrator. His youngest sister Maureen worked as a personnel administrator for Oswego County.

It was fortuitous then that he and Charlotte, his high school sweetheart, raised four daughters who all have successful careers. “Charlotte and I were married for 27 years, from 1972 until her untimely death from cancer at age 54 in 1999. She was a remarkable woman who achieved much, and her candle burned so brightly that it did not last as long as it should have,” he said.

Oldest daughter Kathleen, 43, is an energy lawyer for Wells Fargo Bank in San Francisco. Julie, 41, is a woman’s empowerment coach and speaker who lives in Los Angeles.

Danielle, 39, is a teacher-educational consultant, part-time musician in Gulfport, Fla. Elizabeth, 38, lives in Brooklyn and works as a singer-songwriter and yoga instructor.

Oh, the reason for the book’s title? It dates back to 1952. Sullivan recalled that his kindergarten teacher at St. Mary’s School, Sister Stanislaus (nicknamed Sister Santa Claus), “allowed us to choose our own seats from the four colored tables in the room.”

Digging back in his memory, he sensed that the color tables were a code for dividing the students into four social classes. Young Sullivan relished his seat at the red table, which he considered the upper echelon.

“I do remember one time when I peed my pants, I had to go stand behind the piano for a time,” he writes in his book. “Then [I] was directed by Sister Stanislaus to sit at the [second-class] orange table. I was so devastated by that defrocking that I never peed my pants again.

“It’s 63 years later, and I still haven’t peed my pants again. Thank you, I think, Sister for that object lesson in life. Dry pants people rule the world.”

Ten years ago, he decided to move to Saratoga Springs, “closer to the political action in the state’s capital region,” he said. He still practices law and teaches college classes in government. He is also active as a political consultant and opinion-editorial writer.