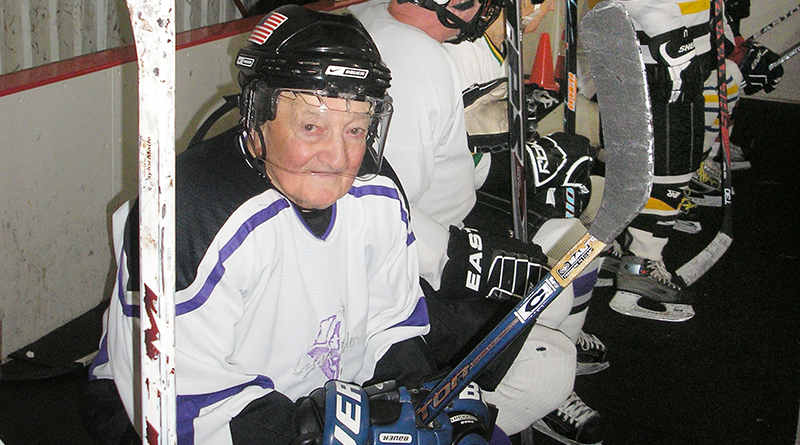 Members of the Gray Wolves Senior Hockey in Cicero — some in their 80s and 90s — play with passion, testing each other’s skills

Whack! A member of the Gray Wolves Senior Hockey club scores a goal as his compatriots soar around the ice at Cicero Twin Rinks. Not bad for a bunch of retirees.

“We’re just a group of guys that enjoy the game,” says Mike McFadden, the 68-year-old president of the Gray Wolves. “It’s a young man’s game, but we still keep trying to keep up with it.”

Formed in 1990, the club gives older ice hockey players the chance to skate past the advancing years and enjoy the sport they love. The average member is at least 65 years old, and one who is still taking slap shots was born in 1923, just five years after the end of World War I.

The Gray Wolves club even has its own “ringer.” Brian Elwell, a Greater Syracuse Sports Hall of Famer and former member of the Eastern Hockey League’s Syracuse Blazers, still takes to the ice for the club at the age of 73.

Despite all those years, the desire for competition has stayed sharp in the club. The Gray Wolves regularly takes on other hockey clubs for seniors with names like “Gerihatricks” and “Olde Crabs.”

Competitions pit teams head to head in three classes — those for players who are 50, 60 or 70 years old or older. In October, one of the club’s 50-and-older teams won their division at the Olde Crabs Senior Invitational Ice Hockey Tournament in Danbury, Conn.

In addition to heading out of town to tournaments, the club hosts its own. This past April, the Gray Wolves Senior Hockey Invitational drew 22 teams, some of them from as far away as Pennsylvania, New England and Montreal.

Club members gather to practice their moves and socialize at Cicero Twin Rinks on Tuesday and Thursday mornings. Players shout encouragement or lighthearted trash-talk to their compatriots from the benches while awaiting their chance to practice. The gate to the ice slams open and closed as they head out to play for a few minutes, come in for a break, and then charge onto the ice again.

Some in the club have long histories in the game. Marshall Webster, one of the original Gray Wolves, began skating at about the age of 10, in the midst of the Depression. In the depths of winter, he would head out onto what he calls “Onondaga Crick.”

“You skate about a half a mile up the crick, and it widened out at one point big enough so you could play a little game,” the 93-year-old Syracuse resident says.

After a stint in the Army during WWII, Webster returned to spend a year coaching ice hockey for a Syracuse high school. There, he met Dick “D.D.” Lynch.

“Marsh was my coach my senior year,” says Lynch, who calls Jack’s Reef, a hamlet in the town of Van Buren, home.

The pair went on to play for the Syracuse Rockets, a local amateur hockey club. In 1990, they joined other hockey-loving seniors to form the Gray Wolves. Though Lynch has had two knees and one hip replaced, the 89-year-old retired carpenter still picks up his hockey stick when others his age drop into their rocking chairs.

One Gray Wolf indirectly gained her love of the game. About 20 years ago, Stephanie Frost set out to help her son learn ice hockey. Though she knew little about it, she soon warmed to the sport.

“I started playing pickup with some younger guys — that allowed me to come in and make a fool of myself,” the 62-year-old Pennellville resident says. “I’d skate and I’d fall and skate and fall.”

Frost joined the Gray Wolves one year later. Though she seems at home on the ice, it took a lot of work to get that way.

“It’s a hard sport,” she explains. “You have to be able to play and skate and handle the puck, which can be rather difficult,” she says, laughing.

Moreover, the sport has the added benefit of being low-impact, unlike running and the other activities in which she used to participate. Even after undergoing a knee replacement, Frost has been able to continue playing defense on her team.

“It’s something that gets in your blood,” she says.

Frost and the other Gray Wolves play with passion, testing each others’ skills, but it’s all in the spirit of camaraderie.

“Some of these guys take it seriously,” Lynch says. “I used to, but not now.”

Though Bob Mieuttunen drives all the way to Cicero from Avon, 30 minutes south of Rochester, to practice, he doesn’t need to send one into the net to make the trip worthwhile.

“I like to make a good pass,” says the 75-year-old defenseman. “I don’t care whether I’m scoring or not.”

After practice is over, the Gray Wolves gather in the rink’s coffee shop for conversation and steaming cups of java. While the players — particularly the older ones — savor that time, they recognize that the years are taking their toll. When the weather turns cold, Webster heads to a little rink in the Valley.

“I’ll go down there just to put skates on — just to see how it feels to skate around,” he says. “If I feel right, then I’ll come out here and start playing.”

Lynch, who was born the year the Ziegfeld Theater opened in New York City — he is 89 — is asked when he plans to give up the sport. He jokes that he’s not in charge of such decisions.