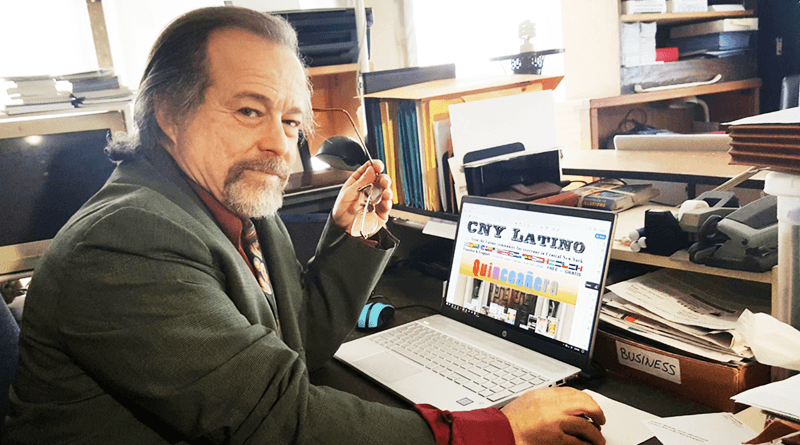 Fifteen years ago, when Hugo Acosta started the CNY Latino newspaper, part of his plan was to meet the
“who’s who” in the local Latino community.

Today, he is one of those movers and shakers himself.

Acosta, the founder, editor and publisher of the bilingual newspaper, is celebrating the newspaper’s 15th anniversary. His enterprise has evolved into the CNY Latino Media Consortium, providing an array of services and media outlets especially geared to assist the Latino population in the area.

Acosta, 59, a native of Venezuela, immigrated to the United States in the 1980s by way of a scholarship. He was studying architecture in Colorado, and it was through one of his classes in computer drafting that he developed a keen interest in computers.

He ended up changing his major and transferring to the New York Institute of Technology, where he graduated.

It was also during this same time frame that Acosta found himself mixing in with the wrong element, and he believed the only way for him to detach was to get away from the culture.

“In fact, I almost lost the language. I told myself I’m going to follow the American dream. I Americanized myself,” he said.

Eventually, he would marry, the couple would relocate to Central New York, and they would have two daughters, Alexandra and Rachel. He would also start a business called H.A. Technical Services, which specialized in computer consulting, with a focus on computer drafting and the internet.  But some personal matters, including his divorce, occurred.

He closed this business, and made some major life changes.

“I decided to go back to my original roots,” he said.

He also followed up on a suggestion from a former client and one-time Syracuse University basketball star, Ed Moss, who was, at that time, involved in an African-America publication. Moss had mentioned that the Latino community wanted a publication of its own.

He didn’t need to wonder for too long.

He refinanced his house, learned as much as he could, and set out to make friends with other editors and publishers in the area, including Art Zimmer, who was the then-publisher of The Syracuse New Times.

When Acosta produced the first two editions, some in the local Latino community were making fun of the paper, he said.

Admittedly, there were some errors in the paper. Also, he heard there was a girl that was also making fun of his Spanish.

Frustrated, he went to visit Zimmer, and told him that he didn’t think he could continue this venture.

Acosta shared his memories of that visit.  Zimmer showed him a number of awards that the weekly paper had won over the years, and then he showed him a couple of the first New Times early editions, in which there were a few mistakes.  This served to encourage Acosta to continue with CNY Latino, and that things would get better as time went on.

Acosta recalled saying to himself, “‘If I’m half of what [the New Times is] right now, I should give it a try.’”

As for that girl? He looked her up, and suggested that instead of criticizing his Spanish, she should help him. She agreed. Today, Marisol Hernandez is not only Acosta’s editor-in-chief, but his girlfriend.

The publication has a print run of 8,000 copies from September to April, and jumps to 10,000 in the summer, when he distributes them at the many festivals that CNY Latino takes part in.

Starting up the paper didn’t come about without its growing pains.

Evolution of a newspaper

Advertisement and content were two of his biggest challenges. “I was trying to get writers. I was trying to purchase content that I could use. I probably had that problem for a year or two,” he said.

Now with the internet, there’s a continual supply of online content providers, and he has four regular columnists.

As for advertisement, he said he learned the tricks of the trade. At the outset, some of the bigger companies told him that if his paper was alive in two years, he could call on them again.

“After a while, the paper started getting more notice,” he said with a slight chuckle.

His influence in the Latino community was beginning to spread beyond the newspaper. He strived to further promote the Latino culture through programs and services that he has included as part of the CNY Latino Media Consortium.

“The Latino image is sometimes misunderstood as poverty, as crime, other things that don’t have to do with success or with being a leader. That’s changed. Let’s not talk about the amount of Latinos that are coming to this country, but the ones that are doing something helpful, good in society, that are successful, that are leaders, that are involved in politics or are in media or are involved in entertainment,” he said.

Further, his company takes part in various cultural events throughout the Upstate New York area, including domino tournaments and Latino festivals in such areas as Syracuse, Geneva, Utica, and Albany. There are hopes that a festival will soon take place in Watertown. Dominos is a popular game, especially in the Hispanic Caribbean, and the tournaments are taken very seriously, he said.

Also, the consortium provides translation services, marketing and advertising services with a focus on the Latino market and produces a digital podcast.

“Just about anything that has to do with Latino, we try to get involved,” Acosta said.

Moving into a digital media mode appears to be a sign of the times.

An intern they once had made an analysis of the newspaper industry two years ago, and she told him that within a decade, the newspaper wasn’t going to be profitable. So, the push is on to go more electronic, he said.

The success he has found doesn’t really surprise him because, as he noted, he’s been prepared and is careful in his risk-taking.

“I’m one of those entrepreneurs that if you plan, and you get an idea of what you’re getting into it, then it will work,” he said. “If it’s going to fail and I fall flat on my face, I’m going to be able to get up and try something else. It’s one of the things you learn.”

One of the initiatives he’s hoping to try in the future is to create a nonprofit in order to apply and receive grants and opportunities for the community.

The nonprofit would be a division of CNY Latino, he said, and it would serve as a foundation that will provide cultural events and tournaments of Hispanic games.

Through this organization, he would also like to create, among several projects, a possible library of Spanish books and a Hispanic Chamber of Commerce. He also wishes to provide greater support to the annual WISE Latina event, a networking symposium of the Women Igniting Entrepreneurial Spirit for Latina females.

The program was created several years ago at the suggestion of Hernandez.