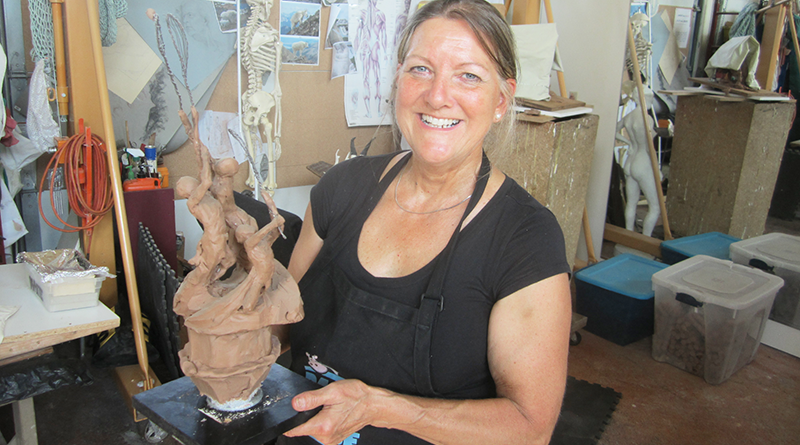 Sharon BuMann had many of her butter sculptures on display at the NYS Fair. She is now writing a book about her work with butter

Sharon BuMann’s work life is worthy of a sculpture itself.

The 63-year-old Pennellville resident has created iconic local sculptures like the bas-relief “Jerry Rescue” in Syracuse’s Clinton Square. She also took to the national stage when she did a butter sculpture of talk show host “Dr. Oz” for one of his programs. Last year, she was honored by WCNY, the public broadcasting station, with its “Women who Make America” award.

The prolific artist got her start with visual arts at a young age.

“At age 12, I announced to my parents that I wanted to be a professional artist,” she said. “They sort of patted me on the head and said ‘Oh, that’s nice honey.’ I told my paternal grandmother that’s what I wanted to do, and she said ‘Well, honey do you have a sketchbook and pencils?’ and I said ‘No.’ She said, ‘We’ll get you one. Come with me.’”

She went to her little private stash of cash. We walked up to the drug store. I came home with a sketchpad and a Mead eraser and two pencils. That’s the closest thing I can relate of a beginning.”

BuMann enjoyed sketching and painting, but she always felt like there was something missing. She wanted to see her creations from the other side. Then she discovered sculpture. It was like love at first sight, she said.

“I could pick it up and turn it around and look at it from the top and bottom and lay on the floor and all those wonderful things that you can’t do in two dimensions,” she said. “Three-dimension became my passion.”

She took a sculpture class run by Jill Webber at The Old School House in North Syracuse. Bumann said discovering sculpting was like finding her Mecca. Within a year, she was doing a one-man show of her own.

BuMann has sculpted professionally since 1976. She has preferred working large — either in bronze or butter. She likes bronze, she said, because of its longevity. And for the last two decades, before finally retiring from them, butter sculptures had kept her employed at state fairs around the country, including the New York State Fair.

BuMann has done over 70 butter sculptures in her career. That work includes many adventures along the way that she plans to document in an upcoming book.

She has documented every significant sculpture she’s done through photographs.

Butter sculptures are ephemeral, being reprocessed after viewed by the public. The sculptor said she usually took between a week to 10 days to do each butter sculpture. That’s up to 150 hours of work. They’re there for a while and then they’re gone.

Although BuMann has done many wonderful sculptures over the years, she has few she calls her own. The business of sculpting requires her to give up her treasures to those she has contracted with. She said contracts for butter sculptures alone have usually gone into the thousands of dollars.

“I take a lot of photographs,” she said. “Strangely I have very few of my own pieces left. I keep selling them or giving them away.”

An artist’s life can be a struggle, but Bumann’s has been successful.

She raised a son and daughter, George and Amy, around her studio. Her husband George died in 2005. To honor his father, her son made a sculpture and presented it to him in the hospital.

“All the doctors thought it was marvelous,” she recalled.
The older George had a lasting legacy on his children. His daughter Amy went into nursing when her father fell ill.

Today, the younger George is a talented sculptor in his own right near Yellowstone National Park. He showed moxie getting into the business, his mother recalled.

“He said to me, ‘You know mom, I went to the local foundry and said, ‘I’m a new sculptor in town,’” Sharon BuMann said. “Can you walk me through and show me what you have?’

“The funny thing was he knew all the lingo. He knew everything like he’d been doing it his whole life, but he’d been involved with it. I laughed. I asked, ‘Did you tell them you’re a new sculptor period?’ He said ‘No.’”

BuMann practically bursts with pride when she speaks of her now-grown kids and five grandchildren. She has another legacy that is continuing to grow — her sculptures.

Along with her book, BuMann is planning more sculptures for the future. Ever the life-long learner, the sculptor says she is going to try to go small with some of her future work. She hopes to make porcelain miniatures of all the larger-than-life butter sculptures she has created over the past 20 years.

It’s is just the latest avenue in a journey that has taken BuMann through the creation of a unique body of work. Looking back, the sculptor has some simple advice for anyone who wants to take up the artist’s life.

“I would say follow your dreams and the rest will take care of itself,” she said.

Sharon BuMann is going from sculpting statues to crafting stories. She hopes to have her book — “Twenty Years of Butter” — on shelves by this summer. BuMann has currently completed 13 chapters of the book and is investigating possible publishers. If she can’t find one, she will likely self-publish, she said.

“I guess I was inspired by the fact I had so many unique adventures in creating butter sculptures,” she said. “The butter sculpture is not even the biggest part of what I do. It’s just getting there and getting home.”

BuMann has travelled around the United States to do the butter sculptures over the course of 20 years. She plans to include photos of the sculptures in her book and expects the book to run over 100 pages.

“I’m learning a lot,” she said. “I’m finding it is more difficult than sculpting. It’s a whole different thought process and it takes a long time. It’s a challenge. It’s creating the visual with the right word instead of grabbing it with your hands and making it.”
She hopes to write a memoir too, once this book is completed.