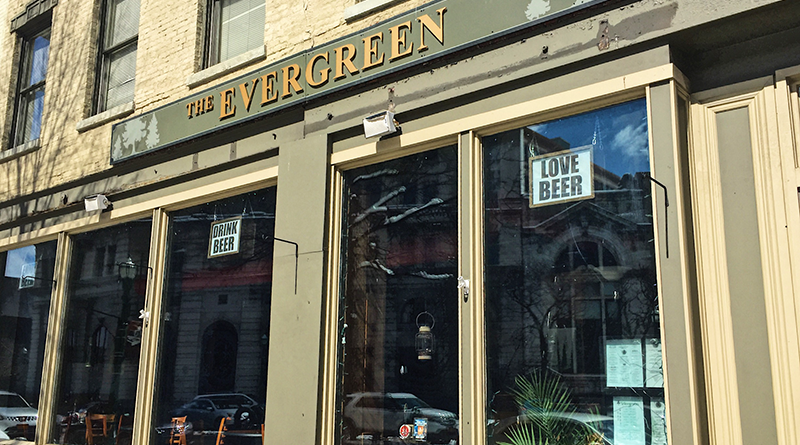 The Evergreen planted itself in Hanover Square in Syracuse late 2015. As it steadily approaches its third anniversary, it has garnered a lot of attention. Its predecessor Bull & Bear Pub left a big hole to fill, but the latest restaurant’s roots have appropriately secured itself in place as part of the downtown culture.

The name of the restaurant not only pays homage to the northeast biome and year-round destinations found in the Adirondack and Catskill mountain regions, but its promise to keep things fresh. The eatery opened up with a promise to source local ingredients and an ever-changing tap line, which stands at 20 beers. Since the doors, a opening, the restaurant has added a supplemental list of canned and bottled microbrews.

The Evergreen is one of those places whether you’re out solo, on a date or with a group of people, the dimly lit restaurant with wooden aesthetics is sure to make a person feel warm and cozy on a winter evening, but not stifling in the warmer months. The practical floor-to-ceiling windows facing Hanover Square let in an incredible amount of light as well.

Patrons have the ability to choose their seating and when they decide to eat. Upon entering, take the nearest table to seat your party; also, there are no reservations. The kitchen window is the place to order food, and a member of the staff will schlep out the meals to you as soon as the orders are ready. Beverages, of course, are ordered at the bar.

There is plenty of space for elbow room for eating at the bar. There are a more than a handful of tables for two (or one) to sit comfortably as well. Two are placed near the back door, the Erie Boulevard East side of the restaurant, but the draft is minimal when the door pulls open.

Every good meal begins with a great appetizer. The Evergreen has an appropriate number of small plates to choose from: flatbreads to poutine and fried pickles to macaroni and cheese (with bacon optional). Most of the items can also be supplemented with vegetarian and gluten-free options, which is a plus.

I went with the cauliflower wings ($9.50), which were seasoned with cayenne hot pepper. They were crispy, but not burnt; they were flavorful, not too spicy and definitely not too salty.

The dish comes with a serving of blue cheese, homemade buffalo sauce and celery. Although I am not a fan of blue cheese, I tried the dipping option anyways. I’m still not a fan of blue cheese. The hot sauce, however, was wonderful. There’s a fair amount of heat, but the heat isn’t drastic to turn the sauce-curious or aficionado away. The consistency isn’t watery and coated the cauliflower really well even after drowning a “wing” in it.

The Evergreen Burger ($13) basked in the natural sun spotlight next. The sirloin burger was cooked perfectly medium as requested. In between two halves of a brioche roll, the burger is complemented with roasted red peppers, beer battered pickles, Swiss cheese and a slather of green goddess dressing. As far as signature items go, this ranks in the top three in my list of burgers in Syracuse.

According to recipes found online, the dressing is composed of mayonnaise, sour cream, parsley, basil, chives, lemon juice, cloves and anchovies (or anchovy paste). The latter ingredient came as a shock to me, being not the most favorable of ingredients, but it works well, especially with the melted Swiss and the crunchy pickles.

As a side, sriracha fries filled the rest of the plate. The paprika-covered house-cut potato wedges were everything to expect from homemade fries. The amount was great, but not overly generous. Although they were pretty salty for my liking, the crispiness made up for that aspect.

To wash it all down, Common Roots Brewing Company’s Shadow Figures ($6 for 10 oz.). The American porter proved to be a flavorful and light brew with distinctive coffee and chocolate notes. Common Roots is located at 58 Saratoga Ave. in South Glens Falls.

The Evergreen is simply a cool, comfortable venue. It’s conscious of food and beverage trend, especially with its local focus. It’s an easy place to designate as a go-to and there aren’t too many extraordinary waits as most sit-down restaurants. It doesn’t claim to be a specialty restaurant for a particular niche, but it holds steady with food and hospitality.