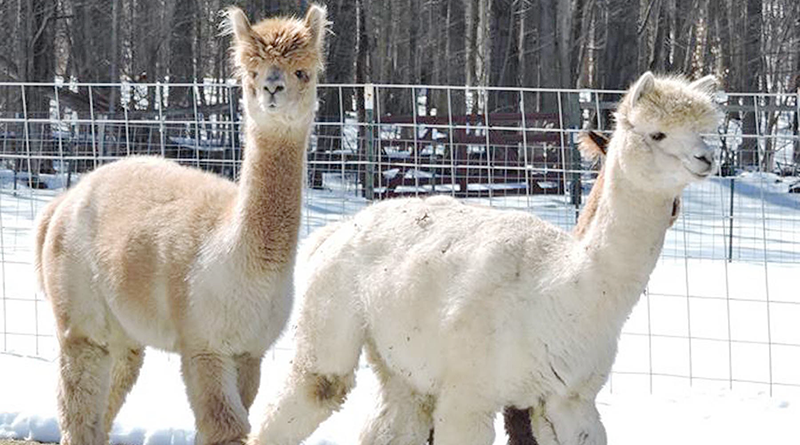 ‘Alpaca-holics’ not parting soon from their furry addictions

There is a sorority in Phoenix, N.Y. It is a sorority of 16 sets of four legs with furry bodies and faces that are too adorable to fully appreciate unless you see them in person.

“It’s interesting because there’s a real attraction to these animals,” McKinney, 70, said. “When we started talking to other alpaca owners, their stories were very similar. Your initial reaction is you’re captivated just by the physicality of the animal. The eyes. There’s a real calming spirit about the animal.”

“We have yet to see a group of people, small or large, that didn’t have this true love and respect for the animal,” Bundy said. “I think that’s why we’re enjoying it so much.”

The pair first encountered the unique species on Sept. 21, 2014 at the Harvest Fest in Sharon Springs. They were at a pivotal point in their lives. They had been spending their lives for the past 15 years as snowbirds, living in a home in Fulton for five months and then seven months in Fort Meyers, Fla.

But Bill’s mom was diagnosed with Parkinson’s disease and they decided to come back to the place they considered home permanently to help with her care.

The encounter with the alpacas at an outing to the festival proved life changing.

“We started down this aisle,” Bill recalled. “I looked and at the end of the aisle there were these two animals. I asked, ‘What is that?’ That’s when I saw my first live alpaca.”

Bill, 62, ruminated about the unexpected encounter on the ride home. It had planted a seed that has turned into a passion. Today, he often wears a cap around the farm while taking care of the girls. Embroidered on his cap is the word “Alpaca-holic.”

The 16 female animals are all individuals with unique personalities, their owners said. The species is indigenous to South America and they are cousins of the camel and llama. They come in a smaller package though, just 100 to 200 pounds, and at a height of only three feet at the shoulders. They can live around 20 years.

The prized possession of the alpaca, other than their charming personalities, is its fleece.

“They’re more and more of a commercial interest in the fleece because the fleece itself is almost water repellent,” Bundy said. “It wicks water away. It’s very, very warm. Knitters like to use it because it doesn’t have the lanolin that wool does in the yarn.”

It is also hypoallergenic.

There are basically four different avenues of making money as an alpaca farmer: breeding the animals and selling the offspring; selling its fleece wholesale; selling fleece products or selling the meat.

The couple refuses to slaughter any of their girls because they are bonded with the animals, but are aware some farmers choose to work that way. The meat is considered a delicacy, McKinney said.

The way Seven Acres Alpaca Farm goes to market with its fleece is rather unique. They engage their fleece resources with a cooperative.

“They give it a dollar value and they bank that amount into a banking account,” McKinney said. “Then they send the fleece out to be produced into product — all kinds of things. They have a catalog. We can purchase back that particular product that we want — gloves or hats or sweaters or whatever. Then they deduct that from our bank. Then we sell it retail.”

McKinney did four major arts and crafts festivals with their products last fall. The farm was able to pay for the girls’ feed expenses with the proceeds.

But more resources are needed for the farm to make ends meet. Bundy wants to base the business on a boutique model, selling only the best and breeding only the best. Right now, each of the adult girls is valued at between $2,000-$5,000. But he has resigned himself to the fact that he needs to sell some of the youngest in order to keep the farm running properly and breed the best possible herd.

It won’t be easy to let go of the little ones.

“There’s always going to be one that you have a hard time parting with,” Bundy said. “There’s somebody interested in my little lighter-colored girl by the name of Summer Dawn. I’m thinking that would be my first one and that would be so hard to do. I would want to know where it goes and all that.”

Bill and Paul learned the ins and outs of Alpaca farming from Jodi and Chris Hatch of Salmon River Alpaca Farm, where they bought their first five girls. The Hatches have mentored the newbies, giving advice whenever needed.

That’s the way of things in alpaca farming. It is a close-knit, friendly community that pays it forward. When some new farmer is getting on his or her feet with the animal, the old pro is there to help. The relationship doesn’t end with the sale of the alpaca.

They chose females because they learned that female Alpacas alone would be a better choice for their herd because the animals have no specific breeding season and adding males to the mix would have definitely complicated matters.

So the sorority on Dinglehole Road was born.

The girls have other admirers too. The couple’s neighbors, Lisa and Ed Hetko, often pitch in to offer a helping hand with the herd. There is something about alpacas that just draws people.

“They’re not just great neighbors and friends but they help us out,” McKinney said.

The composition of this sisterhood may change over time, but McKinney and Bundy are looking forward to developing the best herd they can.

Both men are happy they came back to Central New York for good. Bundy said it is the best decision they ever made.

“We’ve been together 33 years,” McKinney said. “I’ve never seen him so happy.”