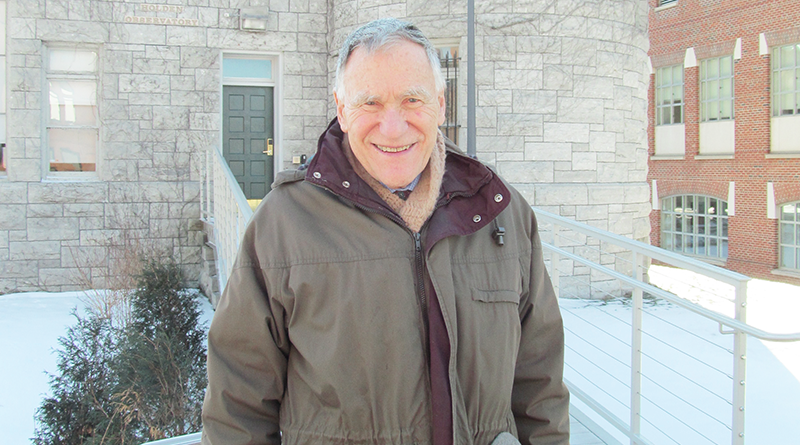 Marvin Druger reveals his creative side after career of teaching science 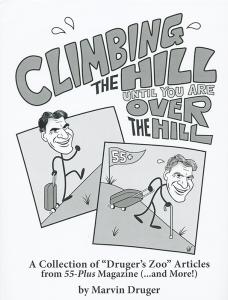 Marvin Druger simply can’t squeeze enough out of life. Druger is a professor emeritus of biology and science education at Syracuse University. To say he is a highly recognizable face on campus is an understatement being that he taught well over 40,000 students in his colorful career. He mostly taught introductory biology courses at SU.

Now retired, Druger will turn 83 on Feb. 21, but you wouldn’t know it by his sharp mental acuity and quick wit. The Brooklyn native resides on Ramsey Avenue in Syracuse.

Over the last several years, he has written seven books. The majority of them are illustrated children’s books, although many of his writings and poems have universal appeal.

His newest work, “Climbing the Hill Until You Are Over the Hill,” is a collection of “Druger’s Zoo” articles featured in 55 Plus magazine.

“People seem to like reading my articles, so I decided that a compilation of the articles would make a book that readers would enjoy,” he said.

There are 51 articles, including 11 yet-to-be published columns.

The often humorous columns are based upon true, personal experiences.

John Norton, a former student in Druger’s general biology course many years ago and now professional cartoonist, created the cover.

Druger once approached Norton in class and asked why he wasn’t taking notes.

“I’m drawing pictures of you,” he replied. I said, “That’s great. Can I use the caricature as my logo?”

“The cover reflects what life is all about. Each of us climbs the hill of life, reaches a summit, and then goes downhill, but can still maintain a smile,” he said.

“Life is teaching, learning, love and laughter,” he said.

Druger said it is difficult to say which is his favorite book.

“I like them all. They all are unique and present perspectives on life and have positive messages to convey to readers,” he said.

If pressed to choose, however, Druger said he would choose “The Diary of Love.” The diary was written when he was a graduate student at Columbia University.

“It reflects my love for my late wife Pat, who died in 2014. It is about intense love that everyone can experience,” he said. “The book will bring tears to reader’s eyes.”

The book conveys the depth of human feelings, and Druger views it as a memorial to his late wife.

“I usually do a lot of talking, and writing is just another way of expressing myself,” Druger said. “It’s like talking on paper.”

He regularly writes radio scripts for his radio program — “Science on the Radio” — on WAER-FM88.3.

As a columnist for 55 Plus magazine for many years, Druger is in the habit of writing as a regular part of his life.

“When an idea comes to mind, I am fortunate enough to be able to write about it fairly quickly. The various books are simply my way of expressing my thoughts on paper,” he said. “It’s like writing a letter to the world.”

Druger said he has a lifetime of “rich and varied” experiences that he uses as themes, and has traveled extensively around the world gathering valuable memories and lessons.

“My underlying motivation for writing is to express perspectives on life that can enrich the lives of readers and make them reflect on their own life experiences,” he said. “I guess my genre is to reach out to people with humorous, moral teachings.”

Druger said motivations for each book are different.

“For example, I was reading a children’s book to my granddaughter. It was terrible,” he said. “I told myself, ‘I can do better than this.’ So, that episode provided me with the motivation to write children’s books.”

Druger and his wife have three children and seven grandchildren.

“I want readers to be stimulated to reflect on their own life experiences and recognize the importance of living a full life and appreciating the humor in life situations.” He said. “There is humor in everything, even death.”

Druger, known for his gift of gab, said the last words his wife spoke to him were, “Marvin, shut up.”

After his wife died, Druger told many people about all she did for him that he now had to do for himself. 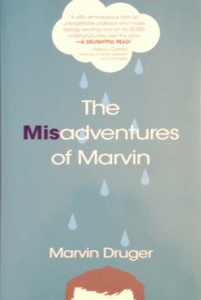 “I complained about the difficulty of taking care of myself and I lamented, ‘It’s the first time my wife ever died.’ I want people to read my books and laugh, or at least smile. If we didn’t laugh at things in life, we’d spend all of our time crying,” he said.

When his wife died, Druger had to learn a lot. “It was very difficult. I always came up with the ideas and Pat would do the work, but I would get the credit.”

Druger said he keeps in mind a lesson taught to him by Story Musgrave, a former astronaut who fixed the Hubble telescope on a spacewalk.

He did six space missions, and earned six academic degrees, including a degree in mathematics from SU.

“I asked him, ‘How can you get so much accomplished?’ He replied, ‘I set my goals and I get the job done.’ That’s the motto I’ve adopted that helps me write the books. I try to ‘get the job done’.”

Druger sells his books through the SU Bookstore, his son Robert’s ophthalmology office (Druger Eye Care in Camillus) and out of the trunk of his car.

Druger said he has no idea what book he will write next.

“I’ll let life flow and see what ideas happen to come along. Since I’m not writing books to make a living, I have no pressure to write another book immediately,” he said.

Druger plans to continue writing his column for 55 Plus magazine and presenting his radio program. He also directs a Saturday science enrichment program for high school students, and organizes a lecture series — “Frontiers of Medical Sciences” — with his son for students interested in a medical career. 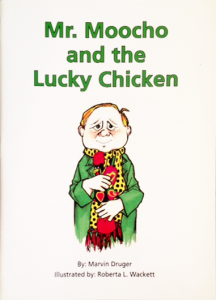 Druger also works out at Metro Fitness in DeWitt, where he participates in an active older adults class.

He characterizes himself as the “loud mouth” at the club and is quite vocal.

“One day, I said I had a bad cold today and can’t talk, and that’s bad. Some guy in the back yells, ‘That’s not bad for the rest of us’.”

“Another time I said, ‘Boy, this exercise is tough. You have to put your head on the floor and your rear on the floor. Someone yells out, ‘Do you know the difference?’”

“Once there was a lady sitting with her head in her hands and I asked, do you have a headache? She said, ‘I didn’t until I saw you coming’.”

Druger said he does have a number of non-book writing activities in mind.

He is thinking of developing a self-guided tour of the SU campus, and developing a radio series on relationships for WAER.

“Someone suggested that I produce a book with all of the radio scripts that I’ve presented over many years on WAER,” Druger said. “Someone also suggested that I consider writing a novel. So, there’s plenty still left to do. I’m not sure what’s next.”

He graduated as a valedictorian at New Utrecht High School in Brooklyn in 1951. He earned a Bachelor of Arts degree in biology and science education at Brooklyn College in 1955.

The Books of Marvin Druger: 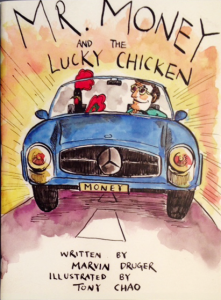 • “Strange Creatures and Other Poems”  (2004) – self-published; Druger’s look at everyday experiences in a new way

• “The Misadventures of Marvin” (2010) – Syracuse University Press; in his many years of teaching biology and marriage to his wife Pat, Professor Marvin Druger’s experiences have been shaped by his energy, quick wit, and tireless sense of adventure.

• “Mr. Moocho and the Lucky Chicken” (2013) – self-published; this is a children’s story with illustrations by Roberta L. Wackett.

• “Mr. Money and the Lucky Chicken” (2016) – self-published; this is an illustrated tale about a wealthy, greedy old man who is transformed into a philanthropist by his new wife and a lucky chicken.

• Diary of Love (2016) – self-published; the book conveys the depth of human feelings, and Druger views it as a memorial to his late wife Pat.

• “Climbing the Hill Until You Are Over the Hill” (2016) – self-published; a collection of “Druger’s Zoo” articles from 55 Plus magazine. 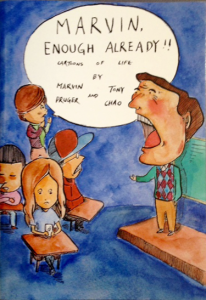